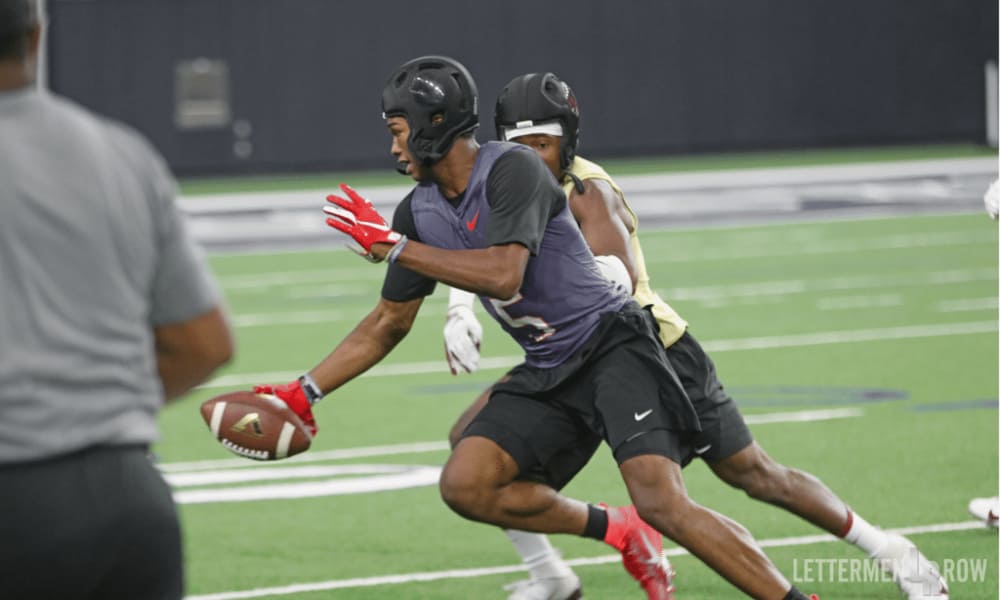 Garrett Wilson was unquestionably one of the best players at Nike's The Opening. (Birm/Lettermen Row)

In case you missed it, Garrett Wilson is good at football

Ohio State’s 2019 recruiting class isn’t quite to the standard set in the previous two cycles, but there are still plenty of reasons for the program to be thrilled.

One of the biggest reasons to smile? Garrett Wilson, the 5-star wide receiver who committed to the Buckeyes in April, choosing them over the Texas Longhorns.

Since his verbal, Wilson has done little to dispel the notion that he’s not just a top player overall in his class, but also the best receiver in America. He, along with California’s Kyle Ford, were the two best players at the position during the first week of July at Nike’s The Opening in Dallas.

How good was he? Here’s a closer look at the performance put on by Wilson from The Star in Frisco, courtesy of the fine folks at 247Sports.com.

Wilson’s not the biggest guy on the field, but he explodes during routes and when attacking the football in the air.

I’ve mentioned in the past that he reminds me of Ohio State’s K.J. Hill, but with more speed and the ability to get in and out cuts faster. What do you think?

On Tuesday night we talked about a pair of 2020 5-star prospects and their attraction to the Buckeyes. Today we’re talking about another in Seattle (Wa.) Garfield’s Sav’ell Smalls.

Smalls, a 6-foot-3, 227-pound linebacker, is the country’s No. 3-ranked prospect in the Class of 2020. He has offers from 22 schools already, including the Buckeyes. And he has some serious Ohio ties.

“My mom was originally from Ohio,” Smalls told Lettermen Row. “I have a lot of family who lives in Cleveland. I grew up watching those Buckeye leaves on the helmets, because I loved the stickers on helmets look when I was younger.”

Of course, helmets and stickers are cool, but they’re irrelevant now for a top recruit. What’s relevant is the family ties to Northeast Ohio. Smalls is actually in Ohio right now at Pro Football Hall of Fame Academy in Canton. Unfortunately, because of the new recruiting dead period in July, there’s no chance for Smalls to turn this visit to Ohio into a visit to the Ohio State. It’s just the fourth time he’s been back in the state in his young life, but he says that now his affinity for Ohio State is based on more important things, like production and NFL talent.

“They put out a ton of defensive linemen, and they definitely develop them,” he said. “Joey Bosa was one of my favorite defensive ends in college.”

Smalls is a linebacker now, but in the right system, he could play with his hand in the ground.

“I don’t prefer either one,” he said. “I’m definitely going to look at which one would be better for my development, wherever I think is the best choice for me, if it’s end or linebacker. I want to be able to show my versatility.”

What he has shown to this point is the willingness to chase down college coaches as well as quarterbacks. He initiated the contact with Ohio State that led to his June 24 offer.

“I’m definitely interested in them,” Smalls said. “Somebody had been talking to them about me for a while, but then my coach reached out and I called [Ohio State director of player personnel] Mark Pantoni. We haven’t spoken since the offer because of the dead period and the 2020 rules.”

Though he can’t talk to the Ohio State coaches much at this point, the Buckeyes have had other representatives working on their behalf. Yes, you guessed it, the talented 2020 commitments.

Ellies camped at Ohio State in June and told Lettermen Row prior to that visit that if things went well, he could see himself not making any other trips.

“The Buckeyes are one of my top choices, yes,” he said. “I’ll probably make a decision sometime this summer or at the beginning of the season. It really just depends on how visits go.”

While he did take other trips, including a recent visit to Virginia Tech, his camp experience with the Buckeyes did go well, very well in fact.

Ellies has been planning to release a Top-8 list in the coming weeks, and some believe that’s what was hinted at by his tweet on Wednesday morning.

I don’t think it will get to that point. In fact, I think that a final decision could come before that, one that I believe ends with a commitment to Ohio State.

Ellies is the country’s 27th-ranked defensive tackle via the 247Sports.com composite rankings, though he’s a 4-star prospect according to the people at Rivals.com.

Does Ohio State have five linebackers committed in their Class of 2019?
Scarlet Sunrise: Ohio State named best athletic department for 2017-18