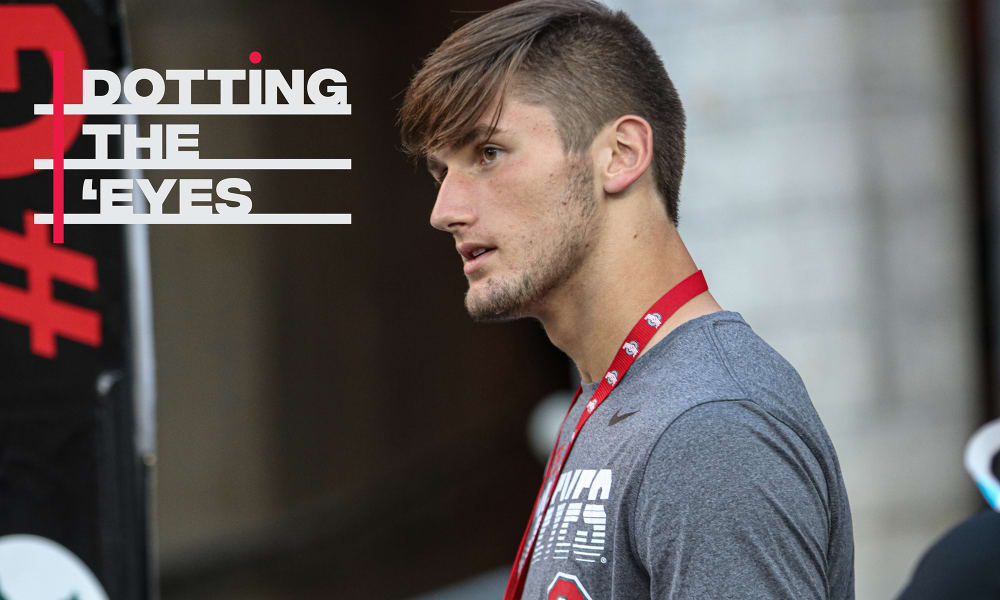 Gabe Powers will return to Ohio State for the second time in the 2019 season. (Birm/Lettermen Row)

Stay in touch or be left out because Ohio State recruiting is a 24-hour, seven-day-per-week obsession. What’s the latest news as the Buckeyes build for the future? Get that and more Sunday through Thursday on Lettermen Row. Sunday’s notebook catches up on some young stars with Ohio State offers and has the latest on a planned visit from a Texas 5-star defensive line.

When he visited Ohio State early in October, Marysville 2022 linebacker Gabe Powers felt confident that if he kept handling his business on and off the field, eventually the program would extend him a scholarship offer.

It didn’t take long for that to happen.

Blessed to receive an offer from The Ohio State University. Thanks to Coach Washington and the Ohio State staff. #GoBucks pic.twitter.com/1MoEFw0umV

Ohio State became the latest major program to offer the 6-foot-4, 220-pound sophomore. And despite having a few days to process it, he suggested it still feels a little surreal.

“I am beyond blessed,” Powers told Lettermen Row. “It was [Buckeyes linebackers coach Al] Washington who offered me. I wasn’t expecting it. I am still feeling very blessed to receive these great offers at such an early age.”

Florida State, Michigan and Colorado have already offered Powers, but there’s no doubt that the Ohio State offer will be a difficult one for the talented sophomore to turn down. He is, however, trying to be patient and not allow himself to get caught up in the emotions that are attached to an offer from a “dream school.”

“I’m going to just have to approach it as I have been,” Powers said. “I still am open to all colleges, and I’m going to go where I feel most comfortable and where I fit in the most.

“I don’t know where I’m going to go. I want to find the place that best fits me.”

Just being from a specific state isn’t enough of a recruiting pitch to land a super-talented player in the current era of college football. So if the Buckeyes want to prove their the right place for Powers, that will happen only by making sure they grow the relationship with him and his family from here.

It’s the end of the season for a lot of high school prospects, and that means it’s the time of the year when college choices are being narrowed down as recruits plan their next wave of visits.

One recruit who has been very high on Ohio State since his April visit is IMG Academy (Bradenton, Fla.) offensive lineman J.C. Latham. The first-year offensive line prospect cut his list to 10 schools on Friday, and the Buckeyes are still in the mix.

Latham is one of a handful of offensive linemen worth paying close attention to as Ohio State turns its focus at the position to the 2021 cycle.

A quick look at the social media profile for Katy (Texas) Tompkins 5-star defensive lineman reveals a little insight into his recruiting plans. There’s a date on his Twitter biography. That’s usually a sign that there’s a commitment date locked in.

“Yep,” Adeleye told Lettermen Row when asked if that date — Jan. 8 — meant a commitment was being planned. “That’s my father’s birthday.”

With that date in mind and set, the next key date when it comes to Adeleye’s recruitment as it pertains to the Buckeyes is Nov. 23. That’s next Saturday when he’s expected in Columbus for the big matchup between Ohio State and Penn State. That visit has been planned for a while now, but there was a potential fly in the ointment.

“We didn’t know until after [Thursday] if we’d be able to make it for the Penn State game,” he said. “It all depends on how our playoffs slotting goes. They decide what day your game is on the week before. If I couldn’t make it to that game, things would still be all right. It wouldn’t have a bad effect on my decision-making process.”

The Buckeyes are hoping that’s the case, because after helping Tompkins knock off Fort Bend Travis, Adeleye got the news about his schedule: He’ll play next Friday night. That’s when he was initially scheduled to travel to Columbus, and that trip is now officially in limbo.

“It’s very iffy now,” he said. “We’re trying to find other flights out, looking at Dallas, New Orleans and Austin. [Anything] that might make it to Columbus in time Saturday morning, because I can’t fly out Friday anymore.”