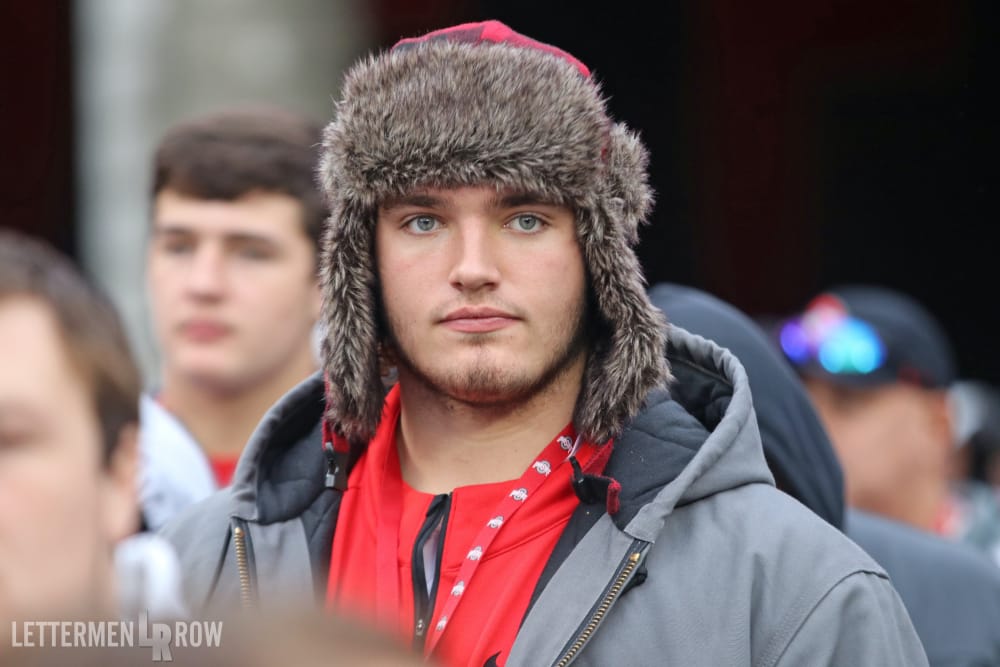 Stay in touch or be left out because Ohio State recruiting is a 24-hour, seven-day-per-week obsession. What’s the latest news as the Buckeyes build for the future? Get that and more Sunday through Thursday on Lettermen Row, including tonight’s update on key Ohio State targets with signing day just three days away.

If you read Friday’s version of Dotting the ‘Eyes and felt a bit frustrated with the lack of good news therein, today’s edition could have bring on a little deja vu.

Let’s not frost this cupcake too much then, OK? This update today isn’t going to read well if you’re Greg Studrawa.

The vibe coming from Springfield (Ill.) right now is that Sacred Heart Griffin High School 3-star offensive lineman Nick Broeker is likely to stay with his commitment to Ole Miss and not flip his verbal to Ohio State. The Buckeyes have worked hard to get in the door here but the unease around who will actually be on the coaching staff looks to be working against the Buckeyes.

Following Broeker’s back-to-back visits with Ole Miss and Ohio State, things been interesting according to the 6-foot-6, 285-pound lineman.

“It’s been pretty wild honestly,” Broeker told Lettermen Row of his last week. “All that’s going on with recruiting and balancing that with school and basketball. It’s been crazy.”

It’s been crazy and it’s been wild but the country’s 39th-ranked offensive tackle says there’s been no final decision in his recruitment. There will be no final call until Thursday (not Wednesday because of a faculty meeting at school) and in fact, amid the chaos, Broeker says he and his family haven’t begun to break down the decision.

“I know it sounds crazy, but between basketball and finals prep,” Broeker said. “We haven’t had any time to discuss it.”

The comfort and relationships here point to Ole Miss, and that’s why right now it’s my belief the likely outcome is that Broeker does stick with Ole Miss.

Last Sunday, following a Friday afternoon visit with Ryan Day, I gave my thoughts about the status of 5-star 2020 offensive lineman Paris Johnson and the strength of his commitment to Ohio State.

The first of those other visits happened this weekend. Johnson was one of a slew of big-time 2020 and 2021 recruits in attendance at Notre Dame, including Buckeyes targets Darrion Henry, Jaheim Thomas, Lorenzo Styles and J.J. McCarthy. It was a monster junior day weekend for the Irish and the timing of their event is certainly a good thing for Notre Dame, taking advantage of the uncertainty around the Buckeyes as Brian Kelly’s program prepares itself for the College Football Playoff.

Anything is possible, I guess, but I don’t think that right now there’s any concern for any sort of immediate that a flip or decommitment is imminent. Instead, just prepare yourself mentally that more of these visits are likely to Notre Dame, Stanford, Florida State and probably a handful of other schools over the next few months.

Again, I wrote last week, it’s not ideal for Ohio State, but until the family is as comfortable with Ryan Day as they were with Urban Meyer, there will be some uncomfortable moments for the Buckeyes.

Continuing on this uncomfortable path we’re on, it’s likely that you’ll see/hear/read some discussion around Buckeyes commit Doug Nester and a visit to Penn State. The visit is apparently an unofficial visit, but it’s happening and is a likely precursor to an official visit back to Happy Valley for Nester in January.

Ohio State was made aware of the visit prior to it happening but again, this is not “ideal” for the Buckeyes and obviously Ohio State’s coaching staff would prefer it not be occurring but with the uncertainty around Greg Studrawa and other assistant coaches’ future, it’s hard for them to be too dictatorial when it comes to where kids go and what they do.

Nester was expected to sign with the Buckeyes this week and enroll early but will not do that and is now likely to be a Feb. 1 final decision. Penn State, Virginia Tech and Georgia are the teams to worry about the most.

Ohio State will have to move quickly with its coaching staff following the Rose Bowl.

The biggest news on Friday was the unraveling of Jordan Battle’s commitment and the eventual flip away from the Buckeyes.

If things go as Battle — and Alabama — want them to, it seems he’ll sign with the Crimson Tide on signing day, eschewing a formal announcement of his decommitment before then.

Here’s the curious part about that, though: there’s some who believe that Alabama is asking Battle to not make a public decision prior to signing day because they fear him doing that will lead to issues with the Crimson Tide’s ability to hang on to 5-star safety Daxton Hill.

Unlike Ohio State, which has recruited Battle as a cornerback, Alabama seems him as a safety and though Hill, who is the country’s best safety prospect, isn’t concerned about competition, he’d prefer that the Tide not bring in a third safety alongside him and Maryland 4-star Demarcco Hellams.

Now, I am not suggesting at all that Battle is going to stick with Ohio State, but I will say if the Hill thing becomes a real issue, I don’t think Nick Saban and Alabama would risk losing him by bringing Battle on board. In fact, I will say that if Battle were to end up on the outside looking in with Alabama because of this, there’s as good a chance he’d sign with Oklahoma as Ohio State, because simply put, the uncertainty around the Buckeyes coaching staff is heading into January is just hard for Ryan Day to sell, no matter how well he connected with Battle and his family.

In an ideal world, Ohio State would really love for Battle to decide against signing this coming week and instead reopen his recruitment in a way that would allow him to make another official visit in January after all personnel decisions have been made in Columbus. Is that likely? Probably not. Is it possible? Sure, depending on what Daxton Hill does.

As of 2:00 p.m. on Sunday here’s where things seem to stand with the Buckeyes and their current crop of 2019 and 2020 commitments.

Dotting the ‘Eyes: Jordan Battle, Alabama and what’s next for Ohio State
Ohio State: No need for Buckeyes to panic about 2019 recruiting class
Advertisement