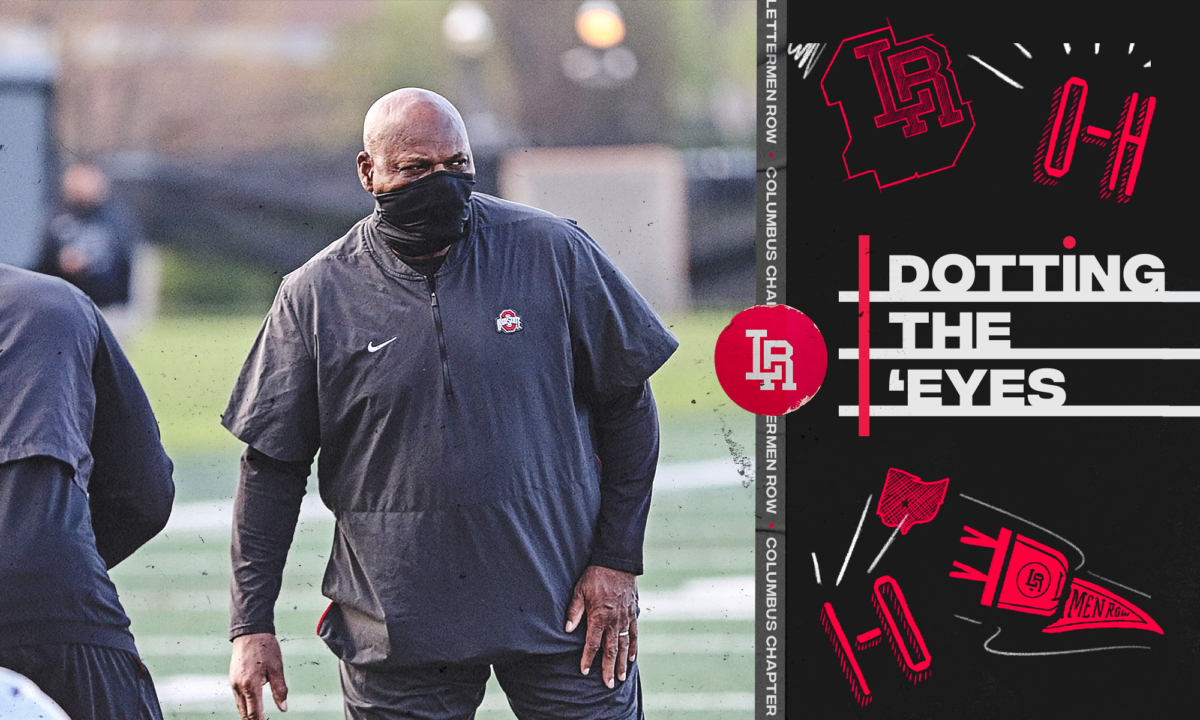 Larry Johnson has eyes on the best talent in the country as Ohio State heads into the summer. (Birm/Lettermen Row)

Stay in touch or be left out because Ohio State recruiting is a 24-hour, seven-day-per-week obsession. What’s the latest news as the Buckeyes build for the future? Get that and more Sunday through Thursday on Lettermen Row. Today’s notebook has thoughts on a number of big-time defensive line targets heading to Columbus this summer.

White, a 6-foot-5, 230-pound edge rusher, has long been on the Ohio State radar and will take his first trip to Columbus over the weekend of June 25. Larry Johnson, in typical Larry Johnson fashion, has been working hard to connect with White. That’s continued to drive the interest he has in the Buckeyes.

If Johnson wants to win the battle for White, he’s going to need to fully apply that GOAT status. White’s top-schools list is a who’s who of college football. The list also speaks to the belief many have that he will likely head south for college, because there’s at least some notion that Oregon isn’t a real option for White right now. The Ducks aren’t one of his planned official visits — and he has four planned already.

Another big-time defensive linemen who has set up an official visit to Ohio State on the weekend of June 25 is Gabriel Brownlow-Dindy. He’s the country’s No. 2-ranked defensive tackle and a young prospect who has regularly mentioned the Buckeyes when discussing his recruitment.

Oklahoma is the favorite in the recruitment right now, and the 6-foot-3, 275-pound lineman has a lot of family ties to that area. Clemson, Texas A&M, Florida and others are in the mix, too.

Like fellow 5-star defensive tackle Walter Nolen, though, I don’t entirely buy any Ohio State hype in this recruitment. Can that change? Certainly it can. But until that official visit actually happen, consider me from Missouri here: Show me. The Buckeyes have never had much luck recruiting Lakeland (Fla.) High School, and I don’t think that’s changing in this recruitment.

Though Brownlow-Dindy is also considered an Oklahoma lean, since I don’t consider him a real Buckeyes target at this time, he’s not being included in this little slice of today’s notebook. The Sooners have been working hard to change the national perception of their defense, and the Class of 2022 could pay some major dividends for them. If that happens, it’s likely going to be at the expense of the Buckeyes, who are actively recruiting two key targets of Lincoln Riley’s.

That would be Duncanville (Texas) 5-star Omari Abor and Chaminade-Madonna Prep (Hollywood, Fla.) 4-star Kenyatta Jackson. The Buckeyes have official visits scheduled with each in June, and both will make visits to Oklahoma as well. Abor will be in Columbus first, and there will be an all-out push from Larry Johnson and staff reel him in. Abor has been a top target of the Buckeyes for months — and there’s been real momentum gained by Ohio State.

As for Jackson, he’ll be at Ohio State over the June 25 weekend. Sources indicated to Lettermen Row that he was willing to shift around his visits in order to see the Buckeyes earlier in the month, but they’ll remain the last official visit he takes in June. Ohio State and Oklahoma are both hoping to distance themselves from Clemson this summer, because the Tigers will hold off all official visitors until the fall season. Jackson is teammates with the most recent Buckeyes commitment, cornerback Ryan Turner.

Finally, one player Ohio State won’t host for an official visit in June is Caden Curry. The highly-coveted Indiana prospect is going to take those in the fall. That decision has led Curry to believe he’ll likely wait until the fall to make his college decision.

“There’s just no way I get done visiting everywhere I want in time,” Curry told Lettermen Row. “And I’m planning my official visits for game days.”

That doesn’t mean the country’s No. 8-ranked defensive tackle won’t be at Ohio State this summer, because he definitely will be.

“I’m going to try to get over there that June 4 weekend in between baseball games or something,” Curry said. “Coach Johnson wants to set up a 1-on-1 visit so it can just be me and him.”