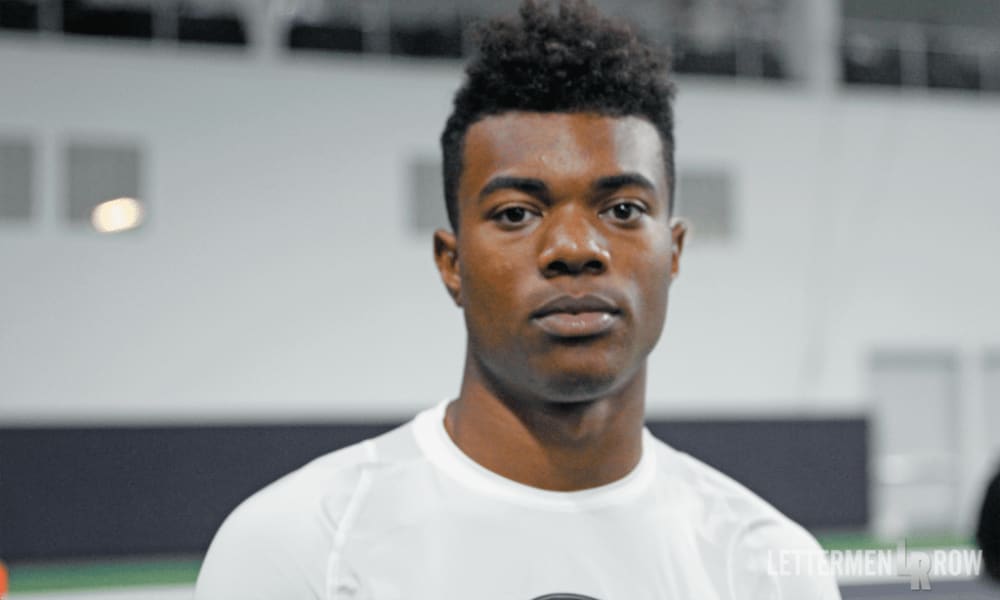 Over the course of the last few months, there have been few 2019 prospects whose Ohio State recruitment has been interesting to me as Austin (Texas) Bowie wide receiver Elijah Higgins.

He’s become a high-priority target in the minds of Ohio State fans over the months that have passed since he took an official visit in June. He’s been a top target of then-offensive coordinator and now-acting head coach Ryan Day, but it seemed he was never really a priority for former wide receivers coach Zach Smith.

Higgins has maintained steady interest in the Buckeyes despite the inconsistency in their approach, mainly because of his bond with Day. That connection is a primary reason why eve with uncertainty around Urban Meyer, Higgins isn’t taking his eyes off of the Buckeyes.

“I’ve always talked with Coach Day,” Higgins said. “From the beginning back when they offered me, I talked to him a lot.

“If he were to fill in that role, it would be very comfortable for me. It wouldn’t be too difficult to be accustomed to.”

Florida is going to get an official from the 6-foot-3, 214-pound Higgins in October. That’s all he has planned right now as far as visits. The Buckeyes are hoping to get another unofficial visit from him, but like most recruits interested in Ohio State right now, he is waiting to see what happens.

“There’s nothing in stone yet,” he said. “It’s really just seeing how everything unfolds. Hopefully soon it’ll all be settled and things will be set in stone.”

If Higgins does visit again, it will be as a result of his growing relationship with new wide receivers coach Brian Hartline as much as it has to do with Day.

“Communication with coach Hartline, it’s still developing,” Higgins said. “I’ve talked to him a few times, but with the season starting up it’s just kind of hard and unfortunate timing all together.”

There may be a day when the work performed by former cornerbacks coach Kerry Coombs no longer carries weight with recruits around the country, but today isn’t that day.

Meet Makell Esteen. He’s a 6-foot-1, 200-pound cornerback from Lawndale (Calif.) High School and the country’s 20th-ranked safety in the Class of 2020. He has scholarship offers from Washington, Arizona, Oregon, Oregon State, USC and Utah among others. He’s never spoken to Ohio State or any of its coaches and has zero ties or connections to the state of Ohio or the Buckeyes program.

Yet, Ohio State is his favorite school.

At some point, Esteen hopes the Buckeyes give him a call.

“I haven’t talked to them yet,” he said. “I have ten offers right now, and Arizona has been in the touch the most. Ohio State is really the only school I feel I could leave the West Coast for.”

I guess we’ll see if Ohio State reaches out to him come Sept. 1 or at some point after that.

Ohio State once again has two 5-star commitments in its 2019 class, at least according to the most-widely utilized industry ranking, the 247Sports.com composite. Miller actually moved into 5-star status briefly following Nike’s The Opening, but as other recruiting networks shuffled their collective rankings, he slipped just outside of that range for a few weeks.

As of Thursday, he’s back in it.

Miller, along with wide receiver Garrett Wilson, are two of the biggest pieces on the table for Ohio State in 2019 and a pair of commits that the Buckeyes simply can not afford to lose.

Also, and I know we touched on how unique Miller is off the field already this week, but here’s another look at the person he is, which makes him even more desirable as a football prospect.

Francis, a 4-star prospect out of Pickerington (Ohio) Central in the Class of 2019, is committed to North Carolina. He’s the country’s No. 13-ranked point guard and the son of former Buckeyes great Jerry Francis. The younger Francis missed his junior season of high school basketball following a knee surgery and unfortunately now he’s going to miss his senior season as well, the result of microfracture surgery in early August on the same, previously injured knee.

Because of that injury and his connections to Ohio State, there have been some rumblings that perhaps the Buckeyes would get back into play for Francis. But that doesn’t appear to be the case. His surgery was performed at the North Carolina campus in Chapel Hill and he told Lettermen Row he intends to sign with there.

“I still talk to [Ohio State assistant] coach [Ryan] Pedon here and there,” Francis said “And I have great conversations with him, but I will be signing [with North Carolina] in the early signing period.”

3 for 3: If Ohio State needs to chase an in-state defensive tackle, who is the best choice?
Is Justin Rogers committing to Ohio State this week?