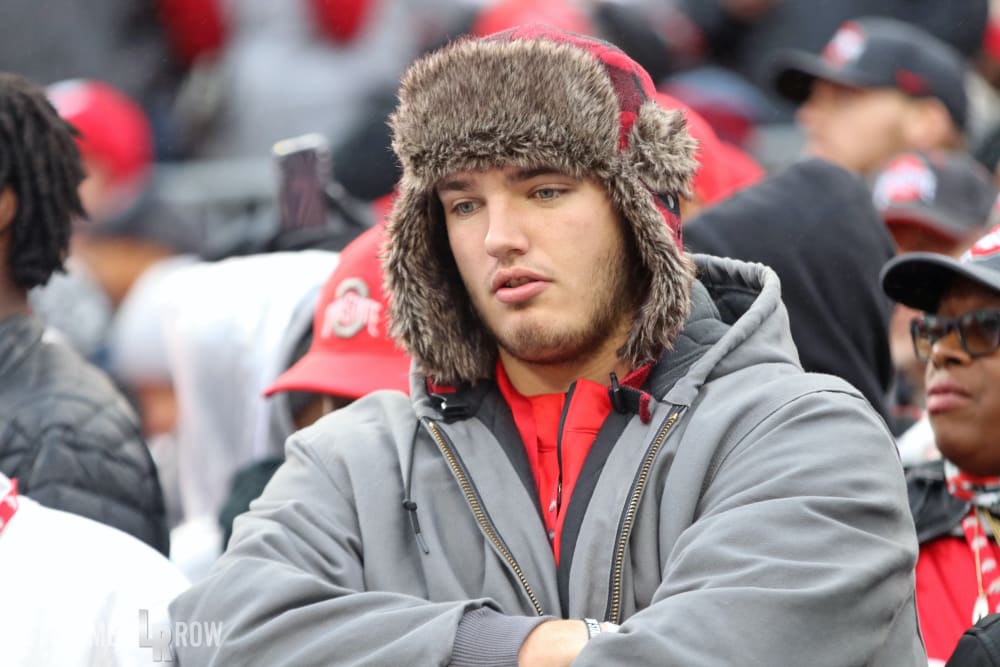 Doug Nester has a real shot at significant playing time for the Buckeyes in 2019. (Birm/Lettermen Row)

Have a question about Ohio State recruiting? This is the place for you, five days a week. Submit your questions on Twitter or on the Lettermen Row forums. Check in daily to see what’s on the mind of Buckeyes fans all over the country. Today’s question is about the Ohio State efforts to retain Doug Nester in the Class of 2019.

Doug Nester has been the most important recruiting priority for Ohio State since he decided against signing in the early signing period. The offensive lineman was the only Ohio State verbal to abstain, and retaining him remains Ryan Day’s most important task on the recruiting trail.

Nester spent the last week in San Antonio taking part in the All-American Bowl and was around a number of signed Buckeyes throughout the week.

Nester was the first player in the Class of 2019 to commit to Ohio State, picking the Buckeyes in the summer of 2017. He was locked in and solid in his commitment until August.

You know … the dark times.

The rumors about a potential firing of Urban Meyer made it easy for other schools to capitalize on Nester’s own, natural doubts. Though he made multiple treks to Columbus over the course of the season, he also stopped in at Virginia Tech and Penn State, though both of those trips were written off as nothing more than him accompanying teammates.

Yet those two schools and Georgia are almost certainly going to receive an official visit from Nester in the next three weeks. He took his official visit to Ohio State the weekend after Meyer retired and spent his first real time with Ryan Day then. But that continues to be the biggest holdup in completely cementing his commitment.

It takes time to develop relationships with coaches, especially during the holidays, the bowl season and the dead period of recruiting. Ohio State appears to be content holding over all other offensive coaches, and if that’s the case, retaining offensive line coach Greg Studrawa could also go a long way in keeping Nester in the fold.

But he’s going to take visits elsewhere, and he should. Once he decided that he was not going to enroll early, there’s no reason for him to not explore all of his options. But it’s important to note that he’s remained committed and every trip he’s making will be stacked against the Buckeyes. Nester has visited Columbus probably 20 times in the last two years, and Day and Studrawa have been there for each one of them. Relationships matter, no matter how hard other schools will try to create cracks in the foundation, Nester’s best relationships right now are still with Ohio State.

Those only got better in the last week. The relationships with the signees got better. The odds of Studrawa staying in Columbus got better.

But there are three weeks of holding on tight to his recruitment left, so buckle up.