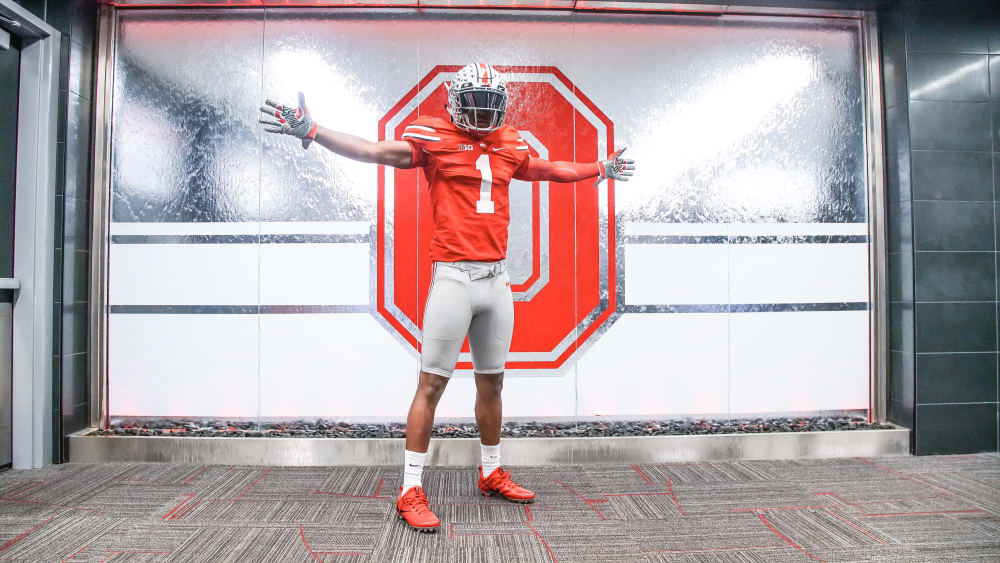 Ohio State had Bay City (Mich.) Central wide receiver Devell Washington back on campus last weekend as the 6-foot-4, 200-pounder returned to Columbus for the second time in a month. His first, which came at the end of June, ended in a scholarship offer from then wide receivers coach Zach Smith. Because of that, getting a chance to meet with interim wide receivers coach Brian Hartline was a key focus of this trip.

“I had a great time,” the 3-star, Class of 2020 prospect told Lettermen Row. “Brian Hartline was amazing. He broke down my film from Friday Night Lights withe me and he gave me a lot of tips.

“I would love to play for him and learn about the wide receiver position from a guy that played in the NFL. I think the film session with Coach Hartline was the best part of the trip. He taught me so much in just about 30 minutes. I feel like he can help me a lot.”

After spending Friday in Columbus, Washington got in the car and headed to Ann Arbor to spend Saturday with Michigan. The Wolverines offered him before Ohio State in early June.

“Michigan was a fun atmosphere,” he said. “I was a little tired though.”

Sunday, Washington had planned to head to Penn State. But he decided to stay home and recoup because he had a trip to Michigan State scheduled for Tuesday. The Spartans offered him during that visit and have set up an interesting few months ahead for the Michigan native. He said it’s hard to compare three schools that have great coaching staffs and great facilities.

“MSU was a fun time, too,” he said. “I’ve been there so many times, so there was nothing new that stood out really. But it felt good to walk away with an offer. There are nice facilities everywhere. I just want to keep building relationships with coaches. That’s the most important thing for me.”

There are certainly other schools that can work into this recruiting battle, but for now, it looks like a three-team race is building for one of the Midwest’s most intriguing rising stars. He tried to break down one advantage each school had over the others but struggled to find any real differentiators to this point.

“Real life Wednesdays stands out at Ohio State, because it’s bigger than football there, plus they aren’t too far removed from winning that national championship in 2014,” Washington said. “Michigan, it’s close to home, and they were the first big school to offer me. That means a lot to me. With Michigan State, it’s also close to home and I’ve built relationships with a lot of coaches there since I’ve been there so much.”

Ohio State made the cut for Amite (La.) 4-star athlete Devonta Lee, who produced a Top-7 list on Twitter earlier this week.

Ohio State is the only non-SEC school to make the cut for Lee, who is ranked as the country’s No. 7 athlete and 105th-ranked overall prospect in the Class of 2019. The odds of him choosing the Buckeyes are slim, but they can only get better if he makes a trip to Columbus this fall, as he intends to do.

“I have liked [Ohio State] since I was small,” Lee said. “I grew up watching them on TV. I’ve been a fan of Ohio State, playing with them on video games.”

The 6-foot-2, 212-pound Lee began his recruiting process with plans on being a wide receiver in college. But sources in Louisiana have indicated he’s likely to end up on the defensive side of the ball in college, whether in the secondary or even at linebacker. To this point, he’s had limited interaction with Ohio State, but his conversations have been with Urban Meyer.

“When I got the offer, Meyer said I was a freak athlete and that he really wanted me,” he said. “It shocked me. I’ve talked to a lot of the other guys on the staff like [offensive graduate assistant] Keenan Bailey. I’m important to them, and I’m trying to get there this season.”

My 247Sports.com crystal ball is on LSU.

The Buckeyes are obviously embroiled in some drama right now, but the outcome of it likely has little impact on recruits in the Class of 2021. That’s excellent news when it comes to their early recruitment of a player like Pickerington (Ohio) North star Jack Sawyer.

RELATED: URBAN MEYER ON ADMINISTRATIVE LEAVE AND THE IMPACT ON RECRUITING

Sawyer, one of just 15 players in his class with an offer from Ohio State, was back on campus at the end of last week — and was glad to get the chance to do so.

“It was great,” Sawyer told Lettermen Row. “Really it was just to continue to build relationships with the coaches, and I feel like I accomplished that.”

Among the coaches, of course, was defensive line coach Larry Johnson, who has had the chance to work with the 6-foot-5, 220-pound rising sophomore a few times in camps this summer. Sawyer was once again pleased with the chance to get more comfortable with Johnson.

“I had a nice meeting with him,” Sawyer said. “I got a chance to talk to him for a while.”

Since things at Ohio State have gone haywire since Sawyer’s visit, he says he’s taking a “wait and see” approach when it comes to any situation with Meyer.

“I don’t have a comment about that right now,” Sawyer said. “I don’t know all the facts and evidence.”

The Buckeyes will have another year or so to figure out what happens in the recruitment of their next must-have local star. He’d like to have his college plans in place before his junior season and sees the 2020 class being built by Ohio State as a good reason why.

“I’d like to have my decision made by this time next year,” Sawyer, who intends to visit Ohio State for multiple games this season, said. “That class of 2020 is looking like it could be very special.”

Truly blessed and grateful to have received an offer from THE Ohio State University💯 #GoBucks #Official😌 pic.twitter.com/7zkWXdOoUx

The 6-foot-3, 347-pound Ika was one of the stars in Dallas at last month’s The Opening, and he talked with Lettermen Row then about his interest in the Buckeyes.

“I went to a camp last summer, I met [defensive line] coach [Larry] Johnson and talked a bit,” he said. “They had sent me a flyer, and I went to the camp. It was a fun camp, he was a great guy. Ohio State has always been a top program, and I’d love to hear from them.”

Ika now has heard from Ohio State. How that offer changes his recruitment remains to be seen with Alabama, USC, Washington and others having the benefit of a big head start .