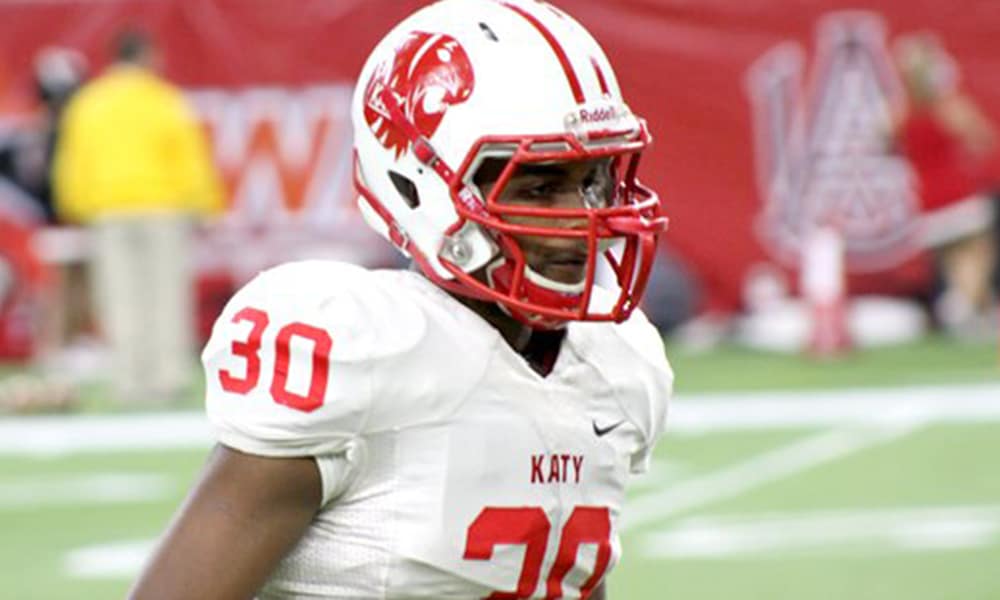 Ohio State will get a shot at Deondrick Glass, but when that happens is still up for debate. (Photo via 247Sports.com)

Stay in touch or be left out because Ohio State recruiting is a 24-hour, seven-day-per-week obsession. What’s the latest news as the Buckeyes build for the future? Get that and more Sunday through Thursday on Lettermen Row, including tonight’s update on Katy (Tx) 2019 running back Deondrick Glass.

On Monday, we spoke a bit about IMG Academy 2019 running back Noah Cain, his upcoming visit to Ohio State and where things stand with him right now. Today, we’ll head to Texas and catch up with another of the running backs who could potentially replace recent decommitment Sampson James.

There have been a number of instances in which we’ve evoked the name Deondrick Glass, but because the Buckeyes seemed set at tailback in 2019, the efforts to recruit him or any other running back were lukewarm at best. Glass is a 4-star prospect at Katy (Texas) High School and the country’s No. 14-ranked running back. His offer list shows more than 25 teams, including Ohio State, Alabama and Georgia — but it’s Oklahoma State that holds 100-percent of the current 247Sports.com crystal ball predictions.

Some people believe that’s because the Cowboys are among the only programs that would currently accept a commitment from Glass. He’ll take an official visit to Stillwater during the last weekend of October and has a trip scheduled to Alabama for an official visit in early November.

And at some point, he’ll take an official visit to Ohio State. On Monday night, Bill Kurelic of 247Sports reported that would be for the Nebraska game on Nov. 3, but Glass told Lettermen Row that’s still kind of up in the air.

“I’m kind of waiting on my dad to confirm,” Glass said Monday night. “I will be visiting next month though, either Nov. 3 or Nov. 24.”

The Buckeyes, likely, would prefer the Nov. 3 date so his visit didn’t run alongside Cain’s.

Glass has really not done much with respect to recruiting yet. There have been no official visits, and he’s not taken many unofficial trips anywhere, either. He has never denied being a fan of Ohio State, though, a program that caught his attention years ago thanks to his affinity for Ezekiel Elliott.

“I like Ohio State, they’ve been one of my favorite schools,” he said. “I haven’t had much time to focus on recruiting. I’ve been thinking about this season and trying to bring Katy another championship.”

With the 2019 and 2020 quarterback situation pretty under control, Ohio State has been able to get a head start on recruiting quarterbacks in the Class of 2021. Last weekend against Indiana, the Buckeyes hosted J.J. McCarthy, a 6-foot-2, 180-pound prospect in that class from the Nazareth Academy in La Grange Park, Ill.

McCarthy currently has four offers, and the Buckeyes interest has definitely caught his attention. Ohio State and Notre Dame were his favorite programs prior to emerging as a recruit.

“[Ohio State staff member Ed] Terwilliger reached out to my head coach, and I called him back immediately,” McCarthy told Lettermen Row. “He said [Ryan] Day and Urban Meyer wanted me to get on campus to experience what Ohio State has to offer.

“I loved every bit of it. I hear all the time about Buckeye Nation. I got to experience it. It was incredible. I was treated first class all day long.”

McCarthy is currently unranked, as most 2021 prospects are at this point. But with offers from South Carolina, Cincinnati, Iowa State and Indiana already under his belt, it’s reasonable to assume he’ll be considered a national recruit. That’s why coaches like Day are already trying to get to know him.

“I talked with Coach Day before and after the game, and it was awesome to meet him,” McCarthy said. “I also spent a lot of time with Corey Dennis. He was so great to talk to. The last coach I was introduced to was John Cooper. I was told he was one of the greatest coaches in Ohio State history.”

It’s never too early to know new names at quarterback, and McCarthy is one to keep an eye on for the next few years.

Ohio State legacy Lorenzo Styles made his first visit as a recruit to the school his father once starred for on Saturday. Though the elder Styles, a linebacker under John Cooper, has been back to campus a few times, the young wide receiver went into this trip eager to see what the Buckeyes had to offer.

“Ohio State is a great and well-known program,” the 2021 Pickerington North star told Lettermen Row. “So. I really expected a lot, and it definitely met that expectation. To me, being from Ohio, I just felt really comfortable. I knew some of the coaches, staff members and players.

“The visit, in general, was great.”

Notre Dame, Boston College and Vanderbilt have offered the 6-foot-1, 170-pound Styles, while Ohio State has not yet. But this visit was just to start really building relationships with the coaching staff, and it did just that. It also afforded Ohio State a chance to show off the facilities that have taken shape since his father’s years.

“Walking through the Woody Hayes facility,” Styles said. “I saw so many things my dad has been a part of, things he has talked to me about over the years. That was very cool. The atmosphere was amazing.”

Dylan Downing looks like an Ohio State running back. That’s just one reason he’s worth getting to know a little about following his weekend visit to Columbus.

The fact that he’s now made three trips to Ohio State since April is another to pay close attention to 6-foot, 215-pound Carmel, Ind. standout.

“That was my third visit there,” Downing told Lettermen Row. “I went to the spring game, a camp over the summer, and the game against Indiana.

“When I went to their camp, [running backs coach Tony] Alford and I talked about getting a relationship going and making sure that I liked Ohio State after learning everything about it. I like Ohio State because not only do they offer some of the best football in the country, they also have great academics. When you can get the best of both worlds, it stands out.”

This particular visit impressed the currently-unranked Downing because of the people at Ohio State.

“The people were a big thing during the visit,” he said. “I got a lot of people noticing that I’m a recruit and talking to me about Ohio State and their own experiences there.

“It was also my first real game and the whole stadium was full, which I’ve never seen for past visits.”

Downing has an offer from Washingon State and Toledo, but has not had conversations with Ohio State about an offer yet. He wants to return to campus soon.

“I talked with [Buckeyes tight ends coach Kevin] Wilson, for the most part,” he said. “There was no direct conversation about an offer, but I hope to see the whole campus the next time I visit and get a better feel for the entire place.”