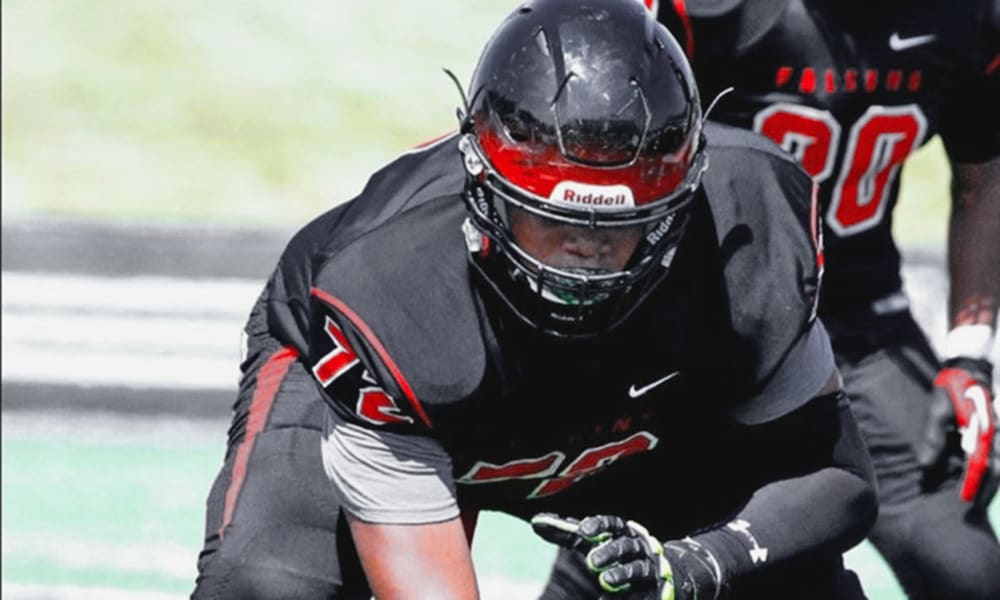 Fincher, a 6-foot-4, 260-pound guard, is a Michigan State legacy whose father Mark played for the Spartans from 1983-86. Michigan State, of course, was always the dream school for Fincher, but he sees Ohio State as one more school that has helped him see that a number of big-time options are out there waiting.

“It opens my eyes to another great school with great opportunities,” Fincher told Lettermen Row after picking up the offer during the visit. “It is going to make make my final choice harder.”

Ohio State offensive line coach Greg Studrawa spent the most time with Fincher. He came away impressed by the third-year assistant.

“He is a great coach,” Fincher said. “He has the old-fashioned, hard-nosed side of him and a great technique-teaching side of him. I would definitely play for him.”

Fincher, whose brother is a 6-foot-8, 340-pound tackle at San Diego State, says the Real Life Wednesdays program also stood out to him.

“The intern programs and the entire visit was great,” he added. “I know I definitely want to get up there again any time I can during the season.”

There are four schools at the top of the current list for the country’s 20th-ranked guard, and he’s going to work hard from here to find a program that fits what he’s looking for in a college.

“Michigan State, Ohio State, Wisconsin and Michigan,” he said. “I’m trying to find what school will impact my life in a positive matter, where I can find success and be a better man. Then the family aspect. Is it a place where I will be able to hang around the program years down the road?”

Ohio State also offered Bryce Mostella, a 4-star defensive lineman from East Kentwood. He’s a 6-foot-6, 235-pound pass rusher, and the offer from the Buckeyes is the 18th he’s collected to this point. His early 247Sports.com “crystal ball” is 100-percent in favor of the Michigan Wolverines, the team he grew up rooting for. He told Lettermen Row that putting aside the loyalties he had a younger person hasn’t been as hard as he thought it’d be when recruiting interest began picking up.

Extremely happy to announce I have received my 20th offer from Ohio State University!! pic.twitter.com/MJ6rIYuAKW

“I find it very easy to put that fandom aside with all the opportunities I’m being given,” Mostella said. “I would never pigeonhole myself. I thought it would be more difficult, but as soon as I started taking visits it’s easier to find other schools to be the sexier option for me and for me to be objective in the process than I thought it would be.”

And the Buckeyes? They’re one of those options.

“The visit was fantastic,” he said. “[Buckeyes defensive line coach Larry] Johnson is the one who offered. He told me about what he expects from his players and he said that he saw my film and saw potential in me

“[The offer] changes a lot. It was a huge honor and was very unexpected.”

On Tuesday, the Buckeyes welcomed Denver (Colo.) Mullen 3-star defensive tackle Aidan Keanaaina to Columbus for his first visit to Ohio State. The country’s No. 25-ranked defensive tackle was born in Oregon, Ohio.

“Overall, I was very impressed with a lot of aspects of the visit, like the team being a true family,” the 6-foot-3, 292-pound Keanaaina told Lettermen Row. “They love each and will get on someone if they are not at their full potential.”

Once again, Ohio State’s commitment to helping its student-athletes find jobs after football was a key factor in Keanaaina’s visit. Johnson also received rave reviews from Colorado’s No. 4-ranked 2020 prospect.

“Another aspect that I loved was that if the NFL doesn’t work out, they make sure you have job opportunities for you after you graduate,” Keanaain said. “Coach Johnson was also amazing. He is very relaxed, but passionate when he coaches. He won’t yell or curse and hasn’t his entire career.”

It had been about six weeks since Randy Holtz, a 6-foot-6, 342-pound offensive lineman from Fort Wayne (Ind.) Snider, visited Ohio State before he returned to campus at the end of last week. Holtz, who holds five current scholarship offers, camped with the Buckeyes in June and returned for another visit with the coaching staff on last Thursday. The June trip didn’t afford much of an opportunity

“Man finally seeing everything and the whole campus was amazing,” Holtz, a 2020 prospect, said. “Ohio State really has everything I want in a college.

“Everyone at weightlifting and during the run test was pushing themselves and each other to be the best they could be. It felt like a family environment. Ohio State really felt like home.”

Ohio State has a big, sprawling campus. But the Buckeyes staff showed Holtz and his family how accessible things can be.

“The campus was beautiful,” he said. “Everything was laid out to where it’s convenient for the players to get to classes. Between Uber, free bus rides, and rides from upperclassmenm there shouldn’t be any excuse for anyone to be late to anything.”

Holtz early offer list includes Purdue, Toledo, Boston College, Bowling Green and Central Michigan. The Buckeyes have interest but haven’t offered, and some of that is because — as he told Lettermen Row in June — his academics weren’t taken care of his in his freshman year of high school. It seems pretty clear that Ohio State is a place Holtz is very serious about.

“After talking to Greg Studrawa, Kevin Wilson, and even Urban Meyer, it’s basically right there,” he said. “They love everything about me football-wise, they’re just nervous about my grades. So I just have show them I’m willing to work hard to get them up.”