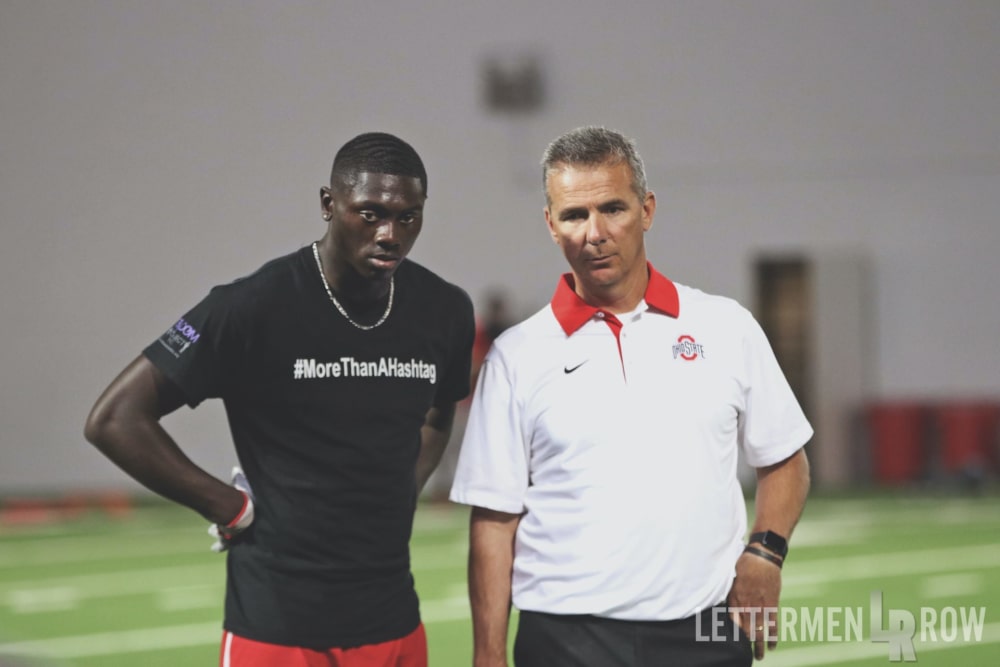 Ohio State commit Craig Young has a promising career ahead of him. (Birm/Lettermen Row)

Under the radar recruits

Thursday’s recruiting question of the day posed an interesting topic: Which 3-star type recruit currently committed to Ohio State has the best chance to outplay his ranking and become a star? Recruiting czar Birm delivered an interesting answer, part of which can be found below.

However, the player I think will surprise the most people is Fort Wayne (Ind.) Wayne’s Craig Young. I say that in part because I was very surprised when I saw him at Ohio State’s one-day camp in June. I went into that day thinking “Sure, he’s a good athlete, but where do you put him and who would you actually take him over?” and left thinking “Wow, he’s a really special athlete and you take him no matter what and figure out his position later.”

Young is a legitimate 6 feet 3 inches, and a solidly-built 212 pounds. He can run. He is physical. He’s got ball skills good enough to be a Division 1 wide receiver target for a number of schools. I can easily see a scenario where Young grows into a top-tier linebacker a la Malik Harrison. He could be a big safety. He could be a tight end. There’s all kinds of ways that his kind of athletic talent can be utilized on the football field and I think Ohio State fans will love seeing how it develops.

With fall camp just around the corner, one of our Lettermen stopped by to discuss the grueling test of fall camp. Be sure to check out what Zach Boren had to say about what the coaching staff puts players through once August rolls around.

How bad did Memphis (Tenn.) Whitehaven tight end Cormontae Hamilton want an Ohio State scholarship offer? With no other way to get there, he took a 12-hour bus ride to Columbus from Memphis to work out at Friday Night Lights. Hamilton was taking a risk, but it appears to have paid off. Here’s part of what Birm wrote in Dotting The ‘Eyes about Hamilton’s situation:

Hamilton was offered by the Buckeyes following a trip he made to Columbus for Friday Night Lights on June 22. He’s not your typical tight end, checking in at just 6-foot-2 and 252-pounds, but Ohio State couldn’t help but offer him after a performance that showed true football toughness. But beyond that? He has an incredible desire to be in Columbus.He actually rode a bus 12 hours from Memphis to get to Ohio State for that camp.

“One reason they offered me was that I showed that I wanted it,” he said. “I came up there on a Greyhound just to be there and camp. I went there with a sprung AC joint in my right shoulder and didn’t give up not one bit. I gave it my all.”

If you know the Ohio State coaching staff at all, you know that they value competitive spirit over any other trait a player may have. Hamilton, the country’s 36th-ranked tight end, has that in spades. The visit with the Buckeyes in June was his second in three months following visit to Columbus in April for the spring game.

More and more, Chris Holtmann keeps showing why he was the right person for the job when Ohio State parted ways with Thad Matta. In addition to returning the Buckeyes to the NCAA Tournament after a two-year absence, Holtmann has demonstrated a deft touch on the recruiting trail.

Austin Ward broke down why Holtmann has been so successful, and here’s Holtmann’s own words on why the Buckeyes seem to be on a roll lately.

“Well, I think [on-court and recruiting success] go hand in hand, for sure,” Holtmann said. “I just think for us, we have got to continue to be really diligent in recruiting. And our staff is that way, we have some dogs when it comes to recruiting. They really, really are aggressive and do a tremendous job. Now, that doesn’t always translate into recruiting success, but I believe if you do it enough and you get there close enough with certain kids, you’ll get your fair share. We have to continue to do that.

“Hopefully we can put quality class after quality class together — and guys that fit us, too. It’s not going to be for everyone.”

Just got my pre-team run nap interrupted by a false fire alarm.. I am now currently looking for a lawyer

Every time someone sees me taking the elevator from the 1st to the 2nd floor, I start walking off with a limp. Won’t let people catch me being lazy 😂