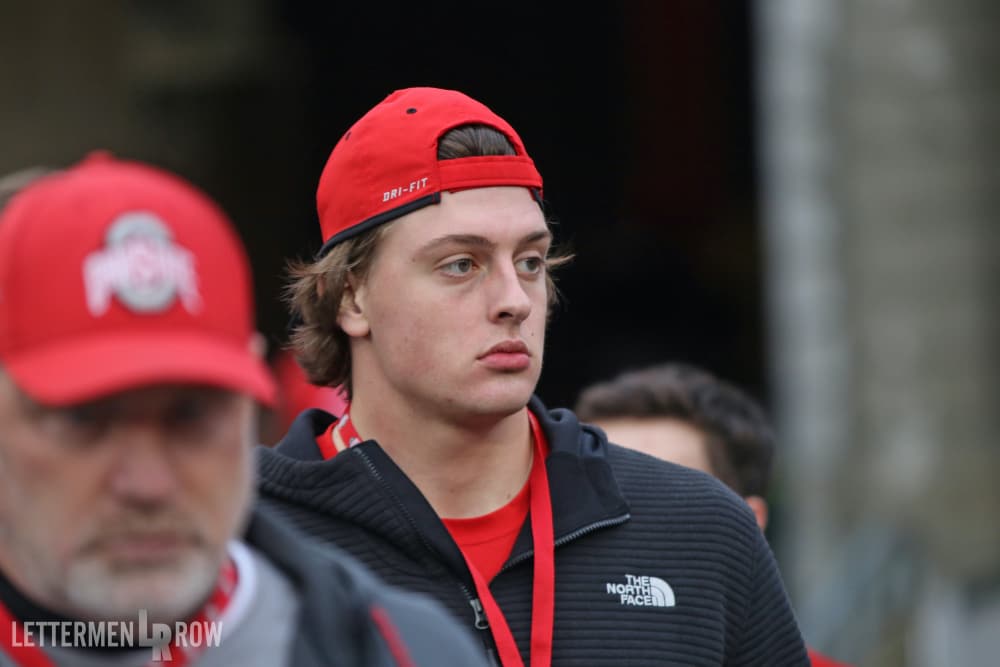 Noah Potter is taking his official visit this weekend as Buckeyes hope to lock up commits who have questions. (Birm/Lettermen Row)

Stay in touch or be left out because Ohio State recruiting is a 24-hour, seven-day-per-week obsession. What’s the latest news as the Buckeyes build for the future? Get that and more Monday through Friday on Lettermen Row, including tonight’s update on a trio of 2021 receivers and the weekend’s official visitors.

Ohio State has a key recruiting weekend on tap and will welcome in a host of major 2019 targets — most which are already committed to the Buckeyes — with the hopes of locking up some major areas of concern.

Jacoby, Young, Potter and Hickman are solid and locked in with their commitment to the Buckeyes, but the Ohio State coaching staff will have to work extra time to make sure that Doug Nester gets the questions he has answered. His concerns appear to be rooted in uncertainty around the future of offensive line coach Greg Studrawa, and those concerns have given him enough pause to delay his early enrollment plans and opt for official visits to other schools, which he’ll likely do in January.

Georgia, Penn State and Virginia Tech are the big three schools to worry about but there’s no doubt that Ryan Day and the Buckeyes are heading into this weekend with the hope of shutting down those visits and getting the 6-foot-6, 310-pound Nester back in the mix fully with Ohio State. It’s the Hokies that are probably the biggest concern here for the Buckeyes.

The visits for Jacobs and Broeker are going to be important for the finish of the Buckeyes class. Committed to Iowa since May, Jestin Jacobs is an Ohio kid who Iowa sources believe will stick with the Hawkeyes but Ohio State is going to have one big swing to change his mind.

Broeker says he’s 100-percent committed to Ole Miss — and arrives in Oxford for his official visit with the Rebels on Saturday — but he’s one of just a few offensive line options the Buckeyes are still considering.

The 6-foot-1, 175-pound sophomore already had a Notre Dame offer, but in the last ten days has added one from both Michigan and Ohio State. The Buckeyes legacy picked up the huge in-state offer from Ohio State on Friday morning. The Buckeyes have been in touch regularly and he’s visited twice in the last month so the offer wasn’t a major surprise to Styles.

So blessed and excited to have received an offer from THE Ohio State University. #GOBUCKS pic.twitter.com/iCAQZGFjaV

“Ohio State and I have been developing a relationship, so the offer really did not come as a surprise,” Styles told Lettermen Row. “The offer does mean a lot though. Being an in-state recruit makes this offer even better.”

Ryan Days’ initial press conference mentioned that the Buckeyes would focus on Ohio recruiting, and Alex Grinch was in Central High School to extend the offer through Styles’ coach. His father, Lorenzo Styles, Sr., was happy to hear about the offer according to his son but isn’t going to push him toward his alma mater.

“My dad just looks at it as another opportunity,” the junior Styles said. “It’s his school, so there is some excitement there but at the end of the day it’s just another great opportunity which I am so blessed to have.”

A few weeks back, Pickerington North 5-star 2021 defensive end Jack Sawyer talked about how he and a few of Ohio’s best sophomores would like to play together in college. Styles acknowledged that the two have discussed that option, as two good friends would be expected to do, but says it’s not going to be the deciding factor in a college choice.

“Jack and I have been friends since we were little and we grew up playing on the same little league teams,” Styles said of Sawyer. “We both have great opportunities and we both are still trying to find our best fit. If that happens to be the same school then great. Either way, I wish him success. Jack and I talked about this as little kids and he, as well as myself, are so grateful for these opportunities.”

The Buckeyes were busy on the 2021 recruiting trail in the last two days and especially busy in Texas. Brian Hartline offered a pair of receivers from Texas in that class, including Latrell Neville from Willowridge High School in Missouri City.

All glory to god! Beyond blessed & excited to announce that I’ve received an offer from The Ohio state University! #GoBucks⭕️ pic.twitter.com/GWCfRMKffG

“I’m so blessed man,” Neville told Lettermen Row about the offer. “I’m speechless, honestly. An offer from Ohio State means absolutely everything. Coach Hartline is an amazing coach and I love what he’s doing up there.”

Neville, 6-foot-3, 180-pounds, is currently unranked in the Class of 2021 and the Buckeyes offer was his “9th or 10th.” For kids in the Lone Star State right now, being offered by Ohio State is something special.

“I’ve been talking to Ohio State over the last few months,” he said. “Hartline has seen all of the videos [Texas trainer] Rashad Whitfield posts of me and he liked what I could do on the field. Ohio State is an elite program that produces guys yearly. Everyone in Texas knows that.”

Another Texas standout gets Buckeyes offer

The Buckeyes also offered Houston (Texas) North Shore athlete Shadrach Banks, the country’s top-ranked 2021 “athlete.” Banks is a 6-foot-tall, 190-pound prospect who could play either side of the ball in college but he was offered by Brian Hartline.

Extremely excited to announce that I have received an offer from The Ohio State University #GoBucks @CoreyDennis_ @brianhartline pic.twitter.com/sMBK7IkVFN

The offer from Ohio State is his a big one, and he’s ready been offered by Alabama, Florida, Texas A&M, LSU and more than a dozen others. He’s a player that will potentially be a 5-star prospect in the Class of 2021 by the time everything is said and done.

As of 4 p.m. on Friday, here’s where things seem to stand with the Buckeyes and their current crop of 2019 and 2020 commitments.

I’ll update this list again on Friday as I get clarification on some of the unknown situations above.