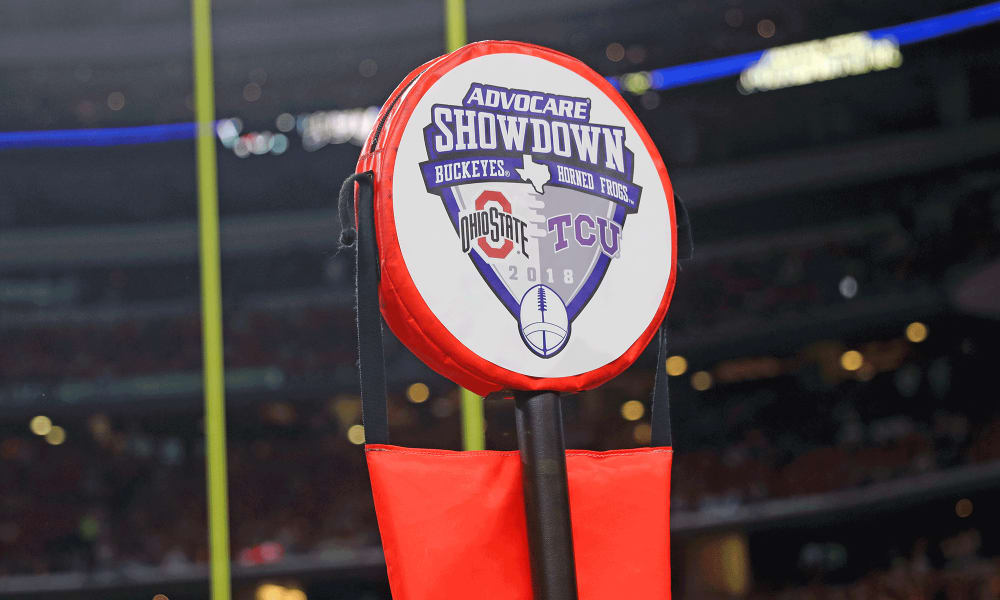 The Buckeyes are undefeated in Texas, and that's paying off on the recruiting trail. (Birm/Lettermen Row)

There may yet be more dividends for Ohio State to reap following its 40-28 win over TCU on Saturday in Dallas. We’ve already spoken about a handful of recruits that watched the Buckeyes play inside of AT&T Stadium, but on Monday night the first new offer to one of those stars in attendance went out to Rockwall (Texas) 2020 wide receiver Jaxson Smith-Njigba.

Blessed beyond measure to receive an offer from OHIO ST UNIVERSITY 🤝 pic.twitter.com/iundERTeAY

The 6-foot-1, 180-pound Smith-Njigba received the offer after conversation with the Buckeyes heated up on Sept. 1.

“For the past three weeks we’ve been in communication every day,” Smith-Njigba told Lettermen Row. “I’ve been in contact with [Buckeyes wide receivers coach] Brian Hartline and [Ohio State director of player personnel] Mark Pantoni.”

Texas’ 36th-ranked 2020 prospect called the Ohio State offense “explosive” after seeing Saturday’s game, and he’s set to see it again in person this season, having already set up his first unofficial visit to the school for early November.

“I’m going up there with my family,” he said. “I’ll be taking an unofficial on Nov. 2 to see more and learn about the school.”

What he knows to this point about Ohio State is what has him interested in learning more.

“Coach Hartline has been great,” Smith-Njigba said. “He’s been real with me from the jump. I’m familiar with how they develop players and get them to the next step, so I’m just trying to know more.”

Buford (Ga.) is the home of Ohio State 2019 commit Harry Miller, but crosstown rival Lanier High School is the home of 2020 linebacker Phillip Webb, a 4-star prospect who has also been hearing from the program lately.

Webb, the country’s No. 7-ranked inside linebacker, is a 6-foot-4, 210-pound prospect that does not yet have an offer from the Buckeyes, but he’s hoping that changes soon. He has 18 current offers — and that group, along with a few other big name schools, are staying in steady contact.

“Pretty much all the schools that offered me so far are staying in contact,” Webb told Lettermen Row. “Michigan, Oklahoma, Auburn and Ohio State are among some showing serious interest as well that haven’t offered. I’m looking forward to finding which school fits best.”

Ohio State has gotten to know Webb a bit with two coaches leading the charge.

“I’ve talked to Ryan Day,” Webb said. “And I’ve talked with Bill Davis. I’m hoping I can make it up there for a game this year. I like Ohio State. They have a winning tradition.”

Another new offer went out from Ohio State on Monday night, this one to 2020 offensive lineman Zak Zinter.

Zinter plays tackle at the Buckingham Browne & Nichols School in North Andover, Mass. Despite being currently unranked according to the 247Sports.com composite rankings, he also has offers from Penn State, Boston College, Purdue and Duke. He earned his offer from the Nittany Lions following a camp performance in Happy Valley.

Ohio State has two offensive tackles committed already in 2020 and remain very much in the mix for Kansas 4-star Turner Corcoran, so the offer to Zinter is interesting. He recently visited Notre Dame and is developing into a national recruit, so the early offer from the Buckeyes could help them down the road if they decide to crank up the intensity in this recruitment.

DJ Graham is another Texas star interested in Ohio State

Hey you know what? Let’s talk about one more Texas standout that saw the Buckeyes and Horned Frogs on Saturday.

“I enjoyed myself,” Graham told Lettermen Row. “I loved the game. It was very cool getting invited to the game, so I guess it eases my mind a bit, knowing that they do think about me.”

The Buckeyes haven’t offered, but tight ends coach Kevin Wilson, who is a major part of the Buckeyes recruiting efforts in Texas, has been the primary point of contact.

“My dad has been in touch with Kevin Wilson,” the 6-foot-tall, 175-pound wideout said. “He just told my dad that he’s excited to build a relationship with me, and he wants to get to start recruiting me. I need to start talking to [Wilson] so I know what they want to see when it comes to an offer.”

LSU, Notre Dame, Miami, Georgia and a host of other major programs have already offered Graham, who checks in as the No. 16-ranked athlete nationally in the Class of 2020. Despite growing up in Texas, he’s actually an Oklahoma fan. Having an offer from the Sooners may make them the team to beat, but he’s not hitching his recruiting wagon to them at this point.

“My dad and his side of the family are from Oklahoma,” he said. “So my dad had always been in my ear about the Sooners, and I’ve always watched Oklahoma play.

“Still, I’m not trying to single any schools out, because they’ve all had an impact on my recruitment. LSU, Notre Dame, Miami and Georgia have had a strong impact to this point.”

Ohio State would be in that mix for Graham if they were to offer.

“I’ve always thought highly of Ohio State,” Graham said. “Their tradition and their head coach, Urban Meyer. It would just mean a whole lot to have an offer and know that The Ohio State University wants me. I know they have a winning tradition like I said before, and a lot of great talent has came from Ohio State. They’d definitely be up there.”

From Paris with Love

We’ll end today with a little feel-good story involving Ohio State commit Paris Johnson. The 5-star offensive tackle prospect from Cincinnati St. Xavier High School is a big personality and a big-time prospect, but he is also apparently a nightmare in the kitchen.

That’s where “Amazing Amy,” a 6-year-old from Cincinnati, comes in.

Check out this video from Cincinnati’s Local 12.