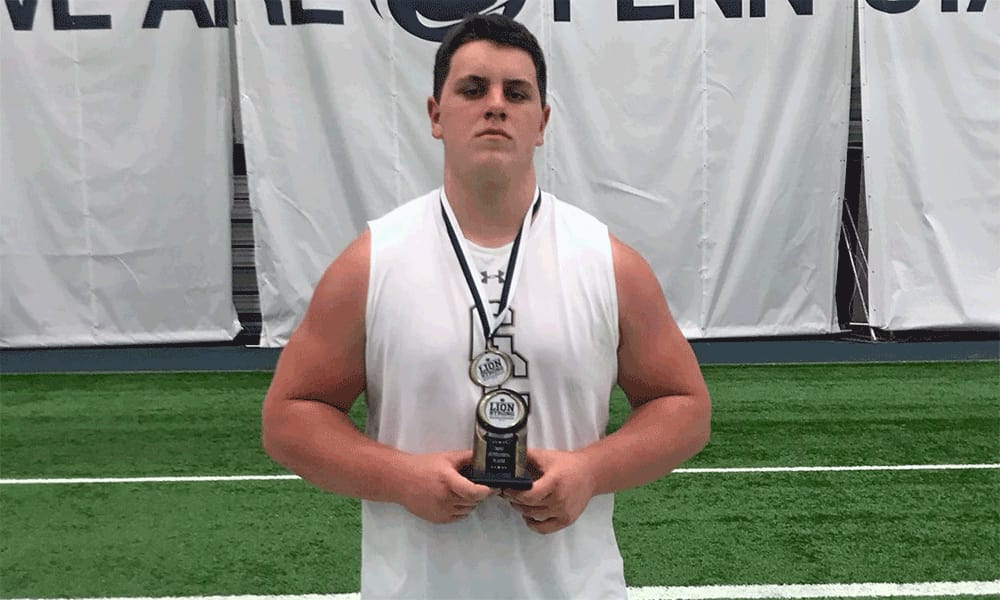 Stay in touch or be left out because Ohio State recruiting is a 24-hour, seven-day-per-week obsession. What’s the latest news as the Buckeyes build for the future? Get that and more Sunday through Thursday on Lettermen Row, including an update on the Buckeyes pursuit of a big-time 2021 offensive tackle.

Ohio State is searching far and wide for another offensive tackle in its 2019 class, but it isn’t ignoring the needs of future classes while doing so.

Way back in April, Olney (Md.) Good Counsel 2021 tackle Landon Tengwall visited Columbus and told Lettermen Row that changed his perception of the program for the good.

“It definitely was a big visit for me,” Tengwall said. “I went in not sure how Ohio State was going to shake out for me in my decision, but I definitely left thinking of them as one of my top schools. It made me want to come back for sure.”

The Buckeyes would love to get him back on campus. Tengwall is a 6-foot-6, 300-pound sophomore and a player that will likely be a 5-star prospect in the Class of 2021. He’s also learning that relationship building isn’t exactly easy for a young prospect. That’s why a return to campus for another in-person visit is of significant importance.

“It’s pretty hard [to get to know the coaches] with the rules, but I try to stay in contact with [offensive line] coach [Greg] Studrawa,” he said. “My last visit was for the spring game, but I’m hoping to be back up soon.

Ohio State defensive back target Peyton Powell did make the reported visit to TCU this past weekend.

The visit was an official, and it may set up a two-team race from here for the talented Powell. As we wrote last week, this decision may come down to a simple question: What position does he want to play?

“The two things that I’ve considered the biggest holdup here: Distance from home and position. If he stays home this weekend, then who the heck knows what happens from here. What I do know is that it seems Powell’s decision is going to come down to those two factors.”

Oklahoma and Texas remain in the conversation here, but it appears each of those schools have avoided making Powell a priority at this point.

Jakob James will return to Ohio State this weekend

Ohio State will welcome back one of Ohio’s top 2020 offensive linemen for a visit this weekend when it hosts Indiana.

Jakob James, a 3-star prospect at Cincinnati Elder High School, camped with the Buckeyes multiple times in the summer and has been in contact with their coaches since Sept. 1. This weekend, he’ll head to Columbus for a game-day visit.

“I have not been there for a game-day visit before,” James told Lettermen Row. “I have had some great conversation with some coaches and a few of their recruiting guys, and I really just want to experience the atmosphere of the Shoe. Ohio State has great fans and they are known for packing it in there each week.”

James will no doubt be watching closely as the Ohio State offensive line does its work.

“I’m also looking forward to watching their play on the offensive line,” he said. “They have been fun to watch this year so far and being able to be right in front of them will be exciting.”

Ohio State hoping to get good news on EJ Liddell

The wait is almost over for the Buckeyes and Belleville (Ill.) West 4-star power forward E.J. Liddell.

The announcement from Liddell, the country’s 48th-ranked 2019 prospect, could provide a huge lift to an already highly-rated recruiting class. Ohio State, Missouri and Illinois are the three finalists and the Buckeyes lead the way in the 247Sports.com crystal ball predictions.