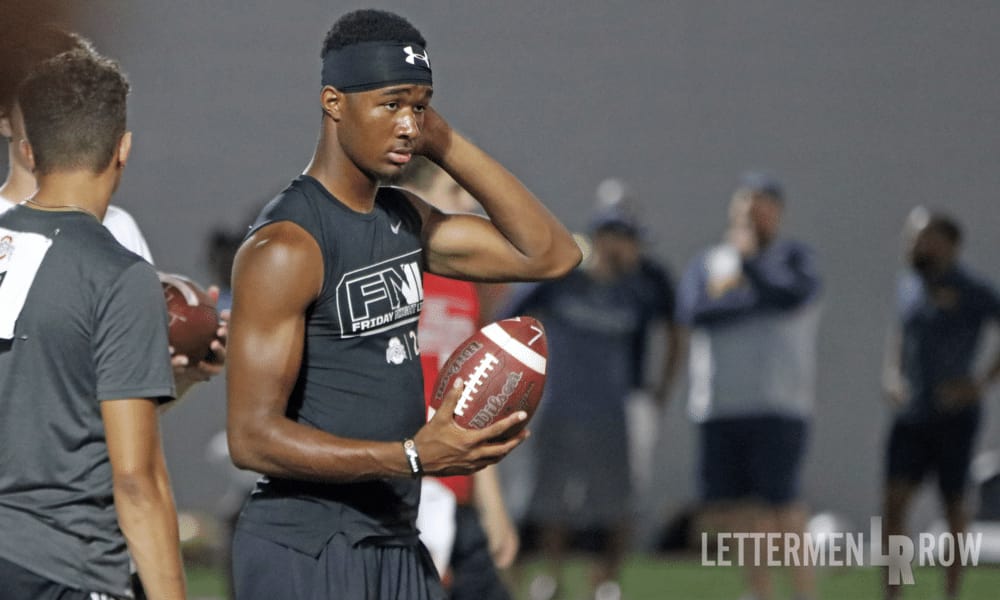 High school football isn’t what it used to be, especially on the recruiting trail. That’s a good thing for a player like Lawrenceville (Ga.) Central Gwinnett’s Justin Fomby.

Twenty years ago, a player of his caliber may not get noticed on the recruiting trail after spending three seasons at Brookwood High School in Snellville, sitting behind quarterbacks that were a better system fit. Now with the Black Knights, a program that lost previous starter Jarren Williams to the Miami Hurricanes, Fomby has a chance to shine for new head coach Todd Wofford.

“[Fomby] has as much potential as Jarren Williams last year,” Wofford said. “He’s All-American caliber. He’s lit it up at every camp he has been to. He ran a 4.68 laser-timed 40-yard dash at Kentucky’s camp over the weekend.”

Prior to the visit to the Wildcats, Fomby was in Columbus with Ohio State on Friday, June 8. The 6-foot-4, 185-pound prospect told Lettermen Row that the chance to work with the Buckeyes – again – was something he’ll take a lot away from.

“I have actually been up to Ohio State before,” Fomby said. “I was there at Friday Night Lights in the summer of 2016 when Tate Martell, Danny Clark and Emory Jones were there.

“Being at Ohio State, it was very beneficial. Just learning from a coach [like offensive coordinator Ryan Day] that’s coached in the NFL and is at one of the top programs in the nation really helped me see what top colleges and NFL teams look for in a quarterback.”

Fomby had a chance to meet with Urban Meyer and Day, and said the Buckeyes head coach remembered him from the past year when Ohio State was recruiting his predecessor Williams.

“It felt good to catch up with [Meyer] again,” he told LR. “He said he saw that I’ve gotten bigger, and joked that I’ve got a little beard going. It was mostly small talk, but he said he was glad to see me spin it.”

As for a potential offer from Ohio State, that’s up in the air.

The Buckeyes want to see more game film from Fomby, which will come this fall. There are other schools that aren’t waiting for that. Missouri has leapt out front and offered him earlier this year following a spring game performance that saw him connect on 18 of 27 passes for 270 yards and three scores in just two quarters. Wofford is a veteran coach in Georgia and sees something really special in his next quarterback.

“From the first day he got here, he’s stepped into a leadership role,” Wofford said. “The biggest thing for him is that he came from a power-running system, so he’s learning how to make protection calls, reading the secondary, etc. He has picked it up fast – he’s actually picked up our system faster than Jarren did – but he is still learning.

“If had hadn’t sat the last two years, he’d be a 4-star prospect, a two-year starter anywhere else and committed. I know quarterbacks, and this kid is special. He’ll be a great story after he rips some conference apart in college.”

Class Warfare: After Cade Stover, who else might Ohio State target at linebacker in 2019?
Just how big will June 22 recruiting weekend be for Ohio State?