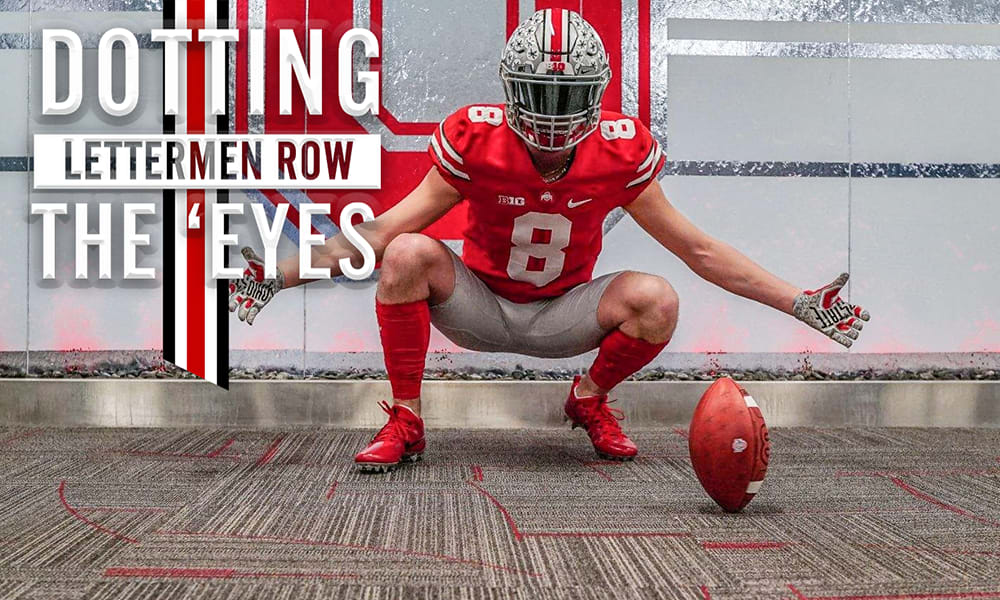 Stay in touch or be left out because Ohio State recruiting is a 24-hour, seven-day-per-week obsession. What’s the latest news as the Buckeyes build for the future? Get that and more Sunday through Thursday on Lettermen Row. Thursday’s update discusses a pair of midweek visits and an offensive lineman recently offered by the Buckeyes.

Ohio State hosted Suffield (Conn.) Academy 3-star athlete Justin Barron for the first time on Wednesday. Barron, a 6-foot-4, 210-pound prospect ranked as the country’s No. 82 athlete in the Class of 2020, has been in regular communication with the Buckeyes since last September when he was in contact with Ryan Day.

“I’ve been hearing from them since September 1, when they were first able to text,” Barron told Lettermen Row on Wednesday. “At first it was Coach Day when he was assistant, but know it’s [assistant secondary coach Matt] Barnes and [Director of Player Personnel Mark] Pantoni.”

Barron is capable of playing offense or defense, either at outside linebacker or at tight end — and he has no preference. He has six current offers with Boston College, Syracuse and Connecticut among them, but his trip to Ohio State helped him see a different level of college football program.

“It was a great visit,” he said. “The facilities are definitely eye-opening. In practice, just the way everyone was competing and focused was on a different level. The energy was high all practice, and they were just flying around the entire time.”

“They said that they love the way I play the game and how athletic I am,” Barron said. “They just want to see me run around in person before they pull the trigger on an offer. They are gonna come to school in spring and then yes, most likely I’ll come camp [in the summer].”

Barron wasn’t the only potential tight end offer on campus with the Buckeyes on Wednesday. Grandview Heights 3-star prospect Luke Lachey was at Ohio State visiting the program as well. We spoke with Lachey two weeks ago, and he indicated this week’s visit was kind of a spur of the moment thing.

“They had been asking me to get to one of their spring practices, and I made the decision to come on Sunday,” Lachey said Wednesday night. “They said that they have a lot of interest in me, and they just want to see me gain some weight and to see some of the other guys they are recruiting to see where we all match up.”

Lachey’s father, Jim, is a former Ohio State lineman, so the young prospect is certainly familiar with the program and what it is about. Still, it’s a unique experience to be recruited by the school.

“It definitely is surreal,” he said. “It’s really cool to be able to experience something like this, but it’s truly a blessing that I’m able to be close to all the programs that have been recruiting me.”

The 6-foot-6, 215-pound Lachey was able to spend some time with Ryan Day and plans to return to campus again this spring.

“I spent about 15 minutes with [Day] and [tight ends coach Kevin] Wilson in his office,” he said. “He’s a great guy, and he’s fun to talk to. I plan on coming back sometime once basketball season ends. The staff wants to get more 1-on-1 time with me, and they might even have me stay with one of the players for the weekend.”

The Buckeyes offered Kempner High School (Sugar Land, Texas) 4-star offensive lineman Akinola Ogunbiyi a few weeks ago, and he’s one of the many young players who have described Ohio State as a dream school for one reason or another.

The problem was he had been committed to Texas A&M since last June. That issue took care of itself on Wednesday night, at least temporarily: the 6-foot-4, 310-pound lineman reopened his recruitment.

Oklahoma is a school to watch, and Texas A&M will remain in the mix as well. Until a visit to Ohio State happens, it’s not worth getting too worked up about his dream school sentiment, but both sides are reportedly working to make that happen.

Ohio State in the mix still for Myles Murphy

He was mentioned in the Recruiting Question of the Day on Lettermen Row, but North Carolina defensive end Myles Murphy has included Ohio State in his top-10 schools.

This version of Myles Murphy is reporting 26 offers, and the Buckeyes are the only Big Ten school in his top 10.