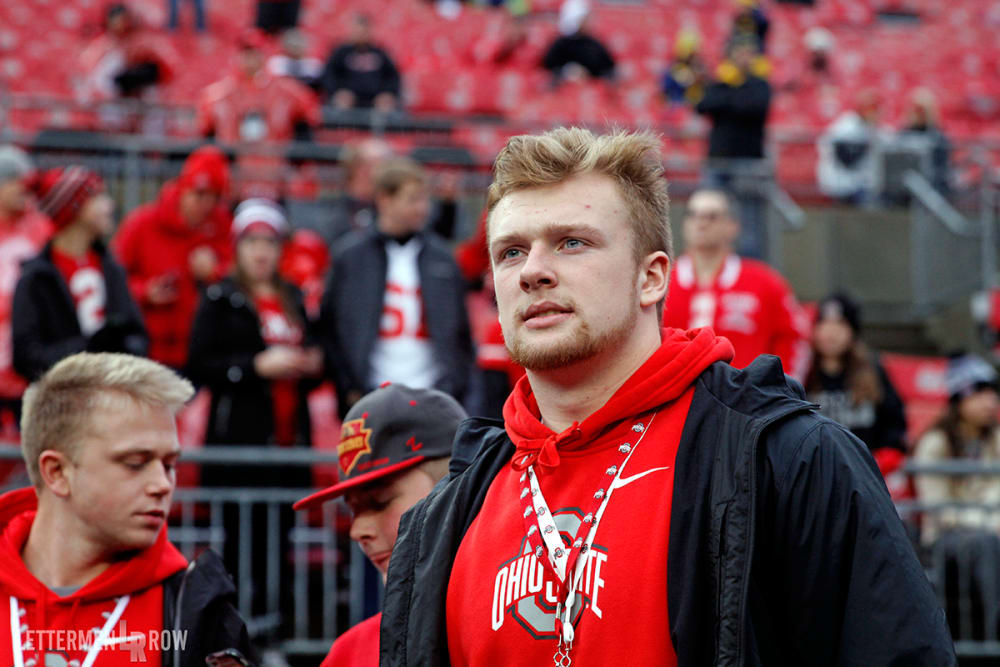 Stay in touch or be left out because Ohio State recruiting is a 24-hour, seven-day-per-week obsession. What’s the latest news as the Buckeyes build for the future? Get that and more Sunday through Thursday on Lettermen Row, including updates on a potential 2019 flip, Cavon Butler’s official visit and another 5-star defensive back from Florida.

Last week we told you that Ferndale (Wash.) 4-star offensive lineman Geirean Hatchett was pretty excited about his weekend visit to Ohio State for The Game against Michigan.

“I want to see a game day at Ohio State,” Hatchett told Lettermen Row. “But especially against Michigan and with the division on the line. It’s going to be awesome.”

Turns out he was right.

“It was awesome, and we had a great time,” Hatchett said after returning home. “It was different. It felt more personal and relaxed. When I was there in the summer, it was my first time meeting all the coaches, so I got the recruiting talks and football talks. But this time it was nice. This time just being able to chill with the coaches and talk life and football.”

Of course, the game mattered. Hatchett was blown away by the atmosphere on campus, at Ohio Stadium and at St. John Arena on Friday night when he checked out the basketball team as it played host to Cleveland State.

“Being on the field when they rushed it was really cool,” he said. “It shows how much the fans care about the Buckeyes and their football. Then being in the locker room after was also really cool. Seeing Urban Meyer talk to his guys and how excited they were was really cool.”

The country’s fifth-ranked 2020 offensive guard was impressed by the performance he saw from the Ohio State offensive line against a very talented Michigan defense.

“I really paid attention to how physical and technically sound they were up front,” he said. “They played extremely well, especially against that great Michigan front. Giving up zero sacks and having all the passing and rushing yards was really impressive.”

This was Hatchett’s second visit to Ohio State, and he is not sure when he’ll be back — but knows it’s a program he’ll consider all the way to decision day. There’s no timeline for that yet, but Ohio State has done everything right to this point in his recruitment.

“I have a mental checklist that a school has to check off all the boxes on,” he said. “Ohio State has to be able to check off all of those boxes for me before I take the next step. At this point, I haven’t found anything that’s missing from my checklist. I definitely still have to think about it a lot and see if it is the right fit for me, just like every other school.

“I’m still not ready to really narrow my choices down yet.”

It’s never easy to take a talented player from the Pacific Northwest. But so far, so good for Ohio State and Geirean Hatchett.

Where does Ohio State stand with Cavon Butler?

One of a handful of official visitors at Ohio State this weekend was Toledo Whitmer defensive lineman Cavon Butler. The 3-star prospect remains committed to Kentucky, but there’s no doubt that things are heading in a positive direction between him and the Buckeyes. This weekend’s visit made Ohio State feel like home for Butler.

“It was crazy and hype,” Butler told Lettermen Row. “They really made it feel like a family atmosphere.

“I really love how they treated all the recruits like we’re part of the team.”

Butler was one of four different defensive tackle prospects making an official visit to Ohio State this weekend, and there’s likely only one spot for a commitment. That competition did not, however, lend to any animosity between Butler, D’Von Ellies, Jared Harrison-Hunte and Jaden McKenzie. In fact, it had quite the opposite effect.

“We all just became close honestly,” he said. “We were together all weekend.”

Anybody hoping for a quick decision from Butler shouldn’t hold their breath. There’s academic stuff that needs to be handled, and Butler wants to make sure he visits other schools no matter what. Alabama, Michigan State and Kentucky are all still in line for an official visit. Still, he watched as the defensive front dominated the Wolverines and couldn’t help but enjoy the moments inside a rocking Ohio Stadium.

“The defensive line won that game,” he said. “They killed them up front. It was just like, ‘Damn, you can really see the hate.’ You can actually feel it in the stadium.”

Expect a decision from Butler in January or maybe even February — as long as Ohio State doesn’t land another defensive tackle first.

The Jacksonville (Fla.) Trinity Christian to Ohio State pipeline that started with Shaun Wade could be building toward adding another key piece. Crusaders 5-star cornerback Fred Davis II, the country’s third-ranked cornerback in the Class of 2020, made his first visit to Ohio State over the weekend and left raving about the Buckeyes.

“It was great,” Davis, Florida’s highest-ranked 2020 player, told Lettermen Row. “The atmosphere was crazy. Ohio State coaches and fans showed me so much love. It was just crazy.”

The Buckeyes have shown a lot of love to a number of big-time prospects at Trinity Christian. The aforementioned Shaun Wade and freshman defensive back Tyreke Johnson were both 5-star prospects out of that school, Ohio State has a commitment from running back Marcus Crowley in 2019 and is also aggressively pursuing fellow 2020 defensive back Miles Brooks. Those bonds are huge for Ohio State, but there’s no concerted push being made by anyone to join up in Columbus. Rather, the group of friends continues to uplift and support their peers.

“It was really important to get up and see Ohio State,” Davis said. “My former teammates and I don’t really don’t talk about schools like that with each other, though, we just are enjoying this process and it’s a blessing.

“It’s definitely a place I see myself. I want to be around the best and nothing other than the best.”

Is Ohio State closing in on Renardo Green?

The country’s No. 46-ranked cornerback made an official visit to Ohio State over the weekend, and sources close to the program have indicated that things are moving in a very positive direction for the Buckeyes and this current Florida State commitment.

Ohio State has one pure cornerback committed in the Class of 2019, but there remain questions about how firm Florida’s Jordan Battle is to the Buckeyes. There is no direct correlation to these two recruitments, however, as Ohio State would gladly bring both players into the fold if it can.

There’s no timeline for a decision from Green, and certainly things could trend away from the Buckeyes as the post-visit glow wears off. But right now I feel comfortable saying he’s likely to commit to Ohio State.

Ohio State recruiting: What options are left at cornerback for Buckeyes?
How much has media scrutiny impacted Ohio State 2019 recruiting class?