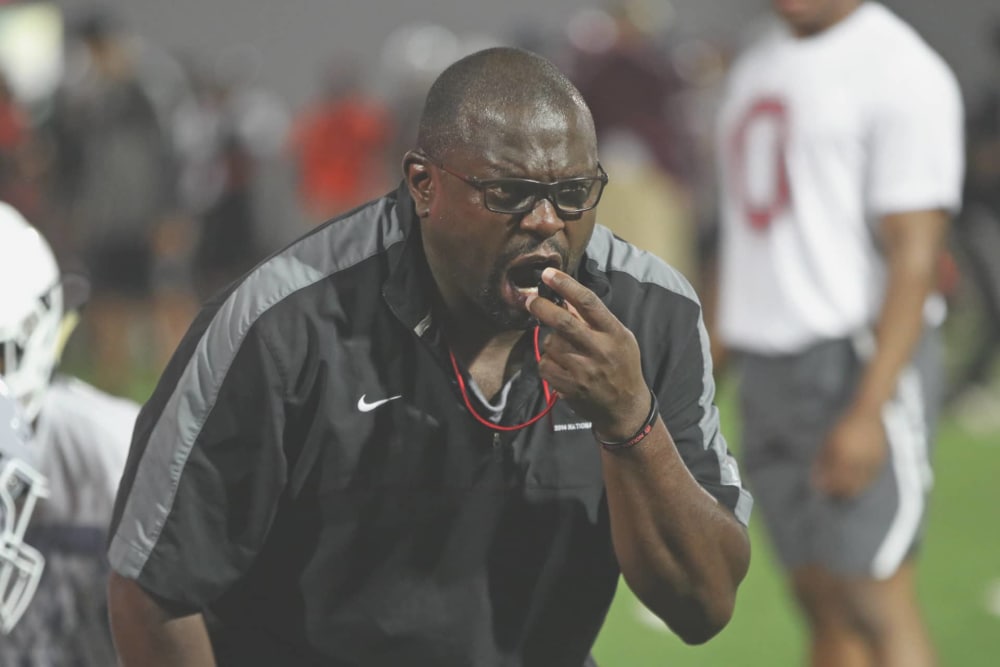 Tony Alford is playing a key role as the Buckeyes look to steal Kendall Milton from the West Coast. (Photo: Birm/Lettermen Row)

Ohio State may very well be done recruiting the running back position in 2019, and it’s just about two months away from really being able to crank up the heat on its top 2020 prospects at the position.

One of the targets the Buckeyes will court is Clovis (Calif.) Buchanan’s Kendall Milton, a 5-star candidate currently ranked as the country’s No. 2 running back in his class. Milton has heard from Ohio State already and has been trying to develop his relationship with Tony Alford and the Buckeyes while working to set up his first visit to the school.

“I had plans to come there this summer,” Milton told Lettermen Row. “But the new dead period dates messed it up. It’s a long way out to Ohio so it’s hard to get over there. I’m heading to Buffalo for a family reunion in July and was going to go then.”

That distance, ultimately, will be the issue for Ohio State when it comes to chasing the 6-foot-2, 210-pound Milton, though a school’s distance from California won’t be a deciding factor in his choice.

“None at all,” he told LR when asked if there’s any pressure to stay close to home for college. “Considering I have family all across the United States, location is not a factor. I’ll just have to look at what teams will provide the playing time I am looking for, what teams have the best programs for life after football and what town I feel most comfortable in.”

Tony Alford’s success developing running backs and the Buckeyes commitment to the running game have both caught Milton’s attention.

Etinosa Reuben, a prospect ranked as 25th-ranked strong-side defensive end but a likely tackle at the college level, will take an official visit to Ohio State the weekend of June 22-24, he told Lettermmen Row on Wednesday.

“My official visit there is the weekend of the 22nd,” the 10th-best prospect in Missouri said. “We talk a lot.”

The other side of that “we” is primarily Larry Johnson, who has spearheaded the Buckeyes efforts to get to know the 6-foot-3, 275-pound lineman from Riverside (Mo.) Park Hill South. It’s the bond with Johnson along with the NFL development that he sees from Johnson’s former players that could eventually swing his recruitment to Ohio State. That battle for his services, though, is getting more competitive with Reuben holding 19 offers and coming off a recent visit to Georgia.

“He produces a lot of great talent,” Reuben said. “The relationship with the coaching staff is the thing I’m looking for the most. I can’t wait [to visit].”

D’Von Ellies anxious to get to Columbus for weekend

Another defensive tackle in the Class of 2019 that was discussed earlier on Wednesday is Owings Mills (Md.) McDonogh School 3-star prospect D’Von Ellies, the No. 9-ranked player in Maryland for this recruiting cycle. Ellies, 6-foot-2 and 280 pounds, will head to Ohio State this weekend for his third visit to Columbus.

“I talk to Coach Johnson a bunch,” Ellies told Lettermen Row. “I’ve been twice. Once with a friend and another time when I was up there for The Opening. I really love the coaching staff there and the people. I am seriously considering them.”

Ellies lists an Ohio State offer, as well as 20 others, including Nebraska, Tennessee, Arizona, Arizona State, North Carolina and others. A decision on his college future could come soon, depending on how his visit to Columbus goes.

“The Buckeyes are one of my top choices, yes,” he said. “I’ll probably make a decision sometime this summer or at the beginning of the season. It really just depends on how visits go.”

The thing is, Ellies says that right now he’s got no other visits planned.

“I’m not 100-percent sure yet on other visits,” he added. “I’ve got to talk to some coaches, but Ohio State is pretty much it right now.”

Ellies will arrive on Friday in Ohio and plans to work out at Saturday’s camp at Ohio State. He says the Buckeyes view him as a 3-technique defensive tackle.

Earlier this week you read about Pickerington (Ohio) North’s 2021 talent Jack Sawyer and his thoughts following a one-day camp visit to Ohio State last Friday. He was not the only talented prospect in attendance from North, though, as 2020 wide receiver Chris Scott was also there and put on a good show for the Buckeyes coaching staff.

“Camp was great,” Scott told Lettermen Row. “The day went very well. I loved competing against the others there and talking to the coaches and my position coaches were great.

“I also talked to some current Ohio State players I know that went to my former high school. I feel like did really well there. Just a few things I need to keep working on, but as a whole I felt like I performed well in all the drills and the one-on-one [drills]. It was just overall a great day and great experience.”

Scott, 6-foot-3 and 175-pounds, caught 24 passes for 485 yards and four scores as a sophomore and has the talent to be a top player in Ohio. He’s now is set to begin a key junior season where he’ll have the chance to prove he deserves that kind of consideration. The feedback he received from Ohio State will only help to achieve that goal.

“They were telling me that they really like me and want to get me back up there more,” Scott shared. “They also gave me some receiver stuff and tips on how to improve my game.”

Brenton Strange has Ohio State offer now, so what happens with Erick All?
Class Warfare: After Cade Stover, who else might Ohio State target at linebacker in 2019?
Advertisement
Advertisement