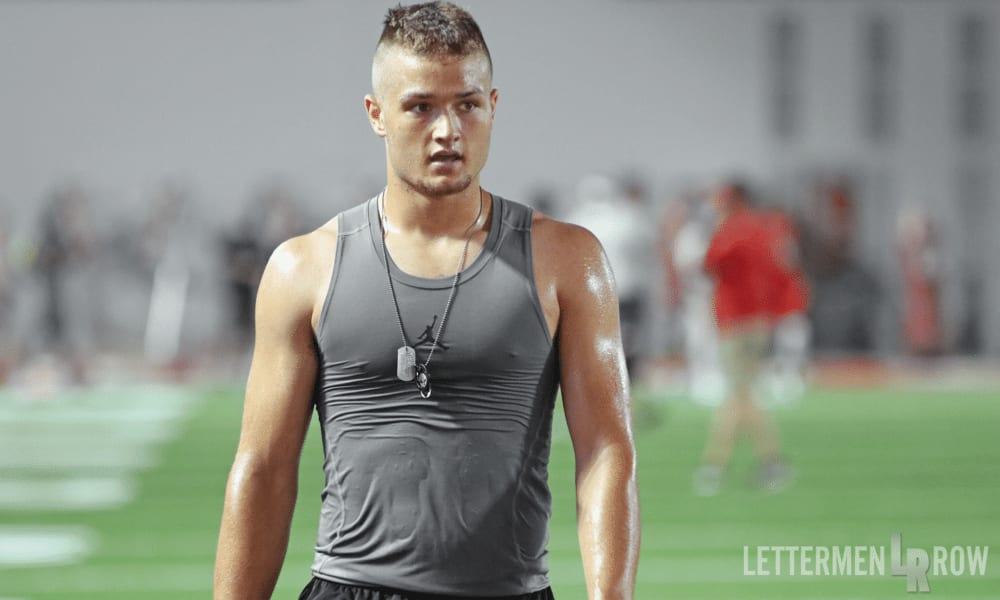 Cade Stover is the only true linebacker committed for Ohio State to this point (Photo: Birm/Lettermen Row)

A cursory review the Ohio State football 2018 roster makes it clear there are not a lot of seniors heading into this season. That’s especially true at linebacker, where only Dante Booker is guaranteed to be moving on next winter.

That is maybe good, maybe bad, depending how the perspective with the Ohio State linebacker corps. But what is not open for interpretation is that numbers at linebacker for the Class of 2019 are going to be limited.

As it stands today, the Buckeyes have one linebacker committed – Lexington’s Cade Stover – and one athlete, Steele Chambers, who could end up playing the position. Will Ohio State take another? Will they instead chase versatile athletes that could fill multiple roles?

I think there’s probably a “yes” out there on both counts, so let’s examine those guys now.

The only player on this list designated as an “inside” linebacker on his 247Sports.com profile is Shammond Cooper. The Buckeyes offered him way back in April of 2017, but he’s only been on campus one time since that offer. It doesn’t appear that the relationship is even warm right now, let alone hot enough for Cooper to be considered a real option at this time.

Can that change? Certainly. Ohio State is recruiting St. Louis very hard and could turn up the heat here at any moment. But right now Illinois, thanks to its hiring of former Trinity Catholic coach Cory Patterson, could have the lead. Cooper is one of 10 players coached by Patterson at Trinity Catholic that holds offers from Illinois.

Ohio State hosted Rian Davis, a 4-star prospect from Wekiva High School, in the first week of June for a two-day visit and continues to build on its relationship with the country’s No. 5-ranked outside linebacker. Davis, 6-foot-3 and 233-pounds, will visit Texas in an official capacity this coming weekend and has no return plans to Columbus. The Georgia Bulldogs are the 247Sports.com crystal ball leader here, and despite his recent visit to Ohio, I don’t think there is much to this one right now.

The Buckeyes are in a tussle with Alabama, Texas A&M and Tennessee for the services of 4-star linebacker Kane Patterson. He’s listed as the country’s 14th-best outside linebacker, but he has told Lettermen Row that Ohio State thinks he could be an inside guy in its defense. His most recent visit was to Columbus to see the Buckeyes and told LR it was the first in what would be his “last” recruiting visits before a college decision was made. Alabama is the presumed leader here, but it’s never wise to count out Tennessee when it comes to in-state products. But the Buckeyes are definitely in the mix as well.

Dixon could be the Midwest’s best linebacker prospect, so it’s not a surprise that his final five schools are all Big Ten programs. At 6-foot-3 and just about 200 pounds, Dixon is a 4.5 guy in the 40-yard dash and a prime candidate to play on the weakside of the Buckeyes defense in the mold of Darron Lee and Jerome Baker. He’ll visit Wisconsin this and the Buckeyes, Wolverines and Spartans are all still on the clock when it comes to an official visit. Will Ohio State even get one?

Ohio State put the very athletic – but positionless – Young through the ringer during a one-day camp on Tuesday and he stood up brilliantly to the challenge of working at safety, linebacker and defensive end. From watching him, I couldn’t help but sense he was most comfortable as a linebacker, and that’s where I think he’ll ultimately end up in college.

Of the names on this list, Young is the closest to becoming an Ohio State commit, but he’s also the one that could end up playing somewhere other than linebacker. So, when it comes to recruiting another guy based off this list, his potential commitment might not change anything in that respect.

There are always new names popping up in recruiting and this list shouldn’t be considered gospel by any measure. That said, you’ve got a pretty good understanding moving forward of what players are still on the board for Ohio State at linebacker as the summer recruiting camp season draws to a close in the next two weeks.