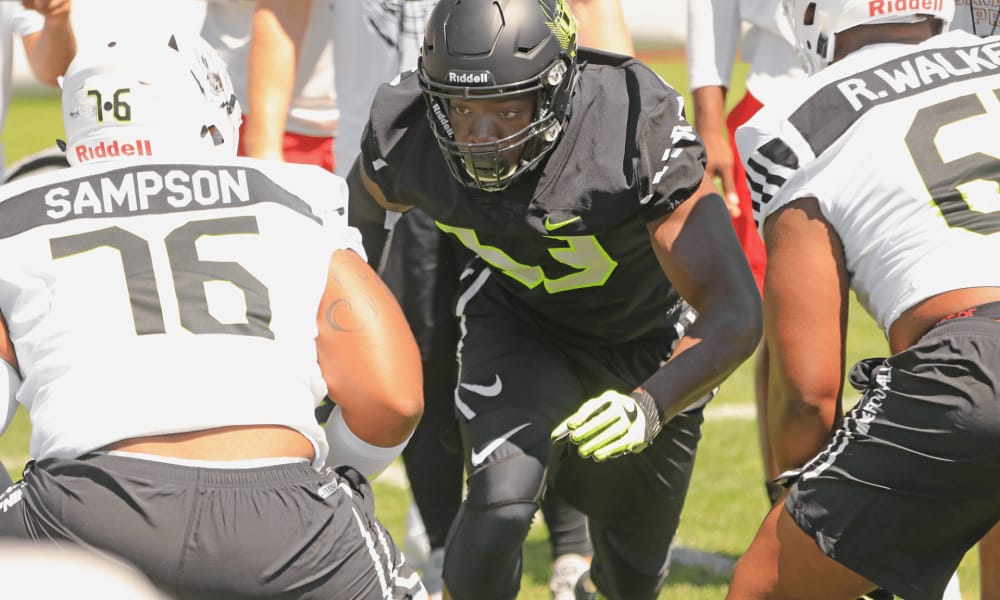 Ohio State has become a hotbed for defensive line talent in the last few years thanks to both the reputation and results of venerable position coach Larry Johnson, Sr..

As the Buckeyes keep their focus on 2019, Johnson’s list isn’t large thanks to a large defensive line haul in the Class of 2018 – but it’s extremely talented. Right now there’s just one commitment in that group, Mentor’s Noah Potter, but there should be two or three more total players added to the bunch. Who could fit those spots?

We’ll start with the lone defensive end that is a real target for the Buckeyes right now, and then dive into defensive tackle, which has a few more options.

The single most important prospect left on Ohio State’s board in 2019 is absolutely defensive end Zach Harrison.

A local product from Olentangy Orange High School, just about 15 miles from Ohio State, Harrison is the definition of an athletic “freak” at 6-foot-6, 240-pounds with wide receiver speed. He’s been a priority for the Buckeyes for the last two years and that will continue until he’s signed, sealed and delivered.

Harrison isn’t your average recruit when it comes to the media, as he stays far away from the spotlight and isn’t concerned with the circus at all. He works in silence and that only helps make him so special as a player and a young man.

If there’s going to be another defensive end to join Potter, it has to be Harrison, and there’s no point in listing any other options at this position until after he makes his college decision. The choice is expected at some point in August. You’ll rarely find a “must get” in recruiting these days, but Zach Harrison is that.

The Buckeyes made a big impression on 5-star prospect Faatui Tuitele when he took an official visit to the school in April, but it’s never easy to land a kid from Hawaii. Alabama, Clemson, USC and all the big boys around the country are working to secure Tuitele, but the Buckeyes remain in his top group of schools. As long as they’ve got a chance, they’ll keep swinging.

Outside of Tuitele, who could be considered a longshot, Mazi Smith may be the top overall target at defensive tackle for the Buckeyes in 2019. Michigan and Penn State are both heavily involved, and Johnson will have his work cut out for him here. Smith, 6-foot-3 and 290-pounds, is a prototypical, big-bodied interior prospect, and he’s a player that Ohio State would love to land this cycle.

Ohio State has recruited well in North Carolina in recent years, notably plucking current Indianapolis Colts rookie Tyquan Lewis from the state. Harris is a prime candidate to be next on that particular list. Harris, 6-foot-2 and 315 pounds, lists the Buckeyes among his top-five schools and has planned to take an official visit to the school this summer. If and when that happens, you could see Ohio State shoot to the top of a list that includes North Carolina State, North Carolina, Tennessee and Georgia.

A local product with a number of big offers, including Notre Dame, Michigan and Penn State, Rodas Johnson has not yet picked up a Buckeyes offer despite camping at Ohio State a number of times in the last year or so. He’s the country’s 14th-ranked defensive tackle, and the 6-foot-3, 275-pound Johnson would likely jump on a Buckeyes offer quickly. For now though, this one doesn’t appear to be happening.

The Buckeyes have been in regular contact with Ellies, a 6-foot-2, 280-pound lineman from the McDonogh School in Owings Mills, Maryland. He told LR that he talks to Johnson “a bunch” and that he expects to visit the school soon. He claims 21 offers, including one from Ohio State, but I think a camp performance would be necessary for Johnson and the Buckeyes to go all in on this recruitment. That could come this weekend or next.

Probably the most raw talent of the names on this list is Etinosa Reuben, but the St. Louis product has a ton of upside in his 6-foot-3 and 275-pound frame. The Buckeyes offered in May and have been keeping tabs on him even though he just started playing football in his sophomore year of high school. He recently visited Georgia, and the Buckeyes would like to get him on campus to see what he looks like in a camp setting.

There are always new names popping up in recruiting and this list shouldn’t be considered gospel by any measure. That said, you’ve got a pretty good understanding moving forward of what players Ohio State is seriously looking at along the defensive line in the recruiting class of 2019.