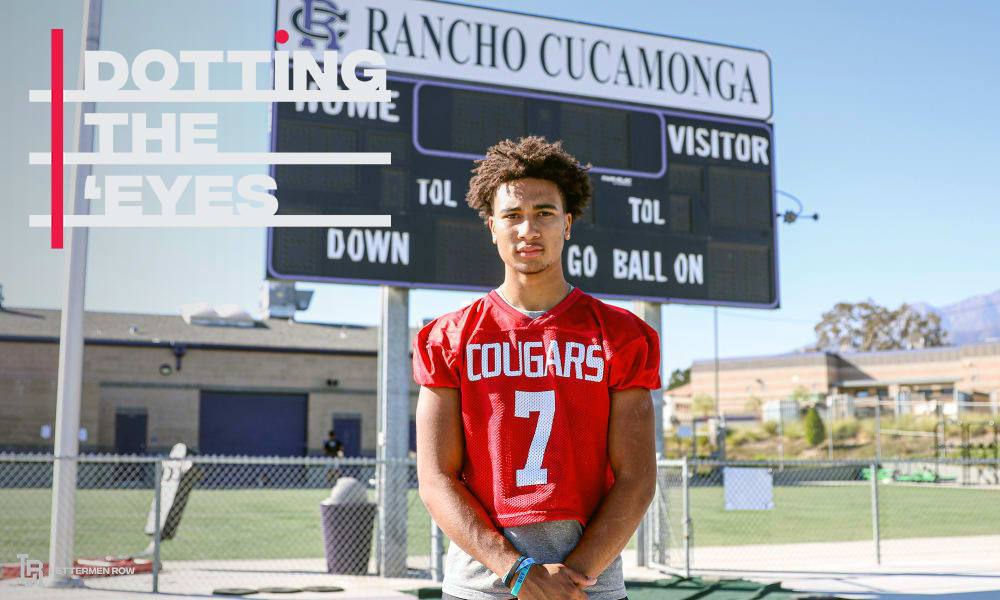 Ohio State target C.J. Stroud will be making a big decision in the next week. (Birm/Lettermen Row)

Stay in touch or be left out because Ohio State recruiting is a 24-hour, seven-day-per-week obsession. What’s the latest news as the Buckeyes build for the future? Get that and more Sunday through Thursday on Lettermen Row. Today’s notebook is all about C.J. Stroud who will make a much-anticipated return visit to Ohio State this weekend.

The Buckeyes are less than one week away from what is expected to be a busy early-signing period, and they’re less than one day away from the start of a pivotal official visit from California quarterback C.J. Stroud.

The trip to Ohio will run from Friday morning through Saturday night, giving Ryan Day and his coaching staff the final crack at the country’s second-ranked pro-style quarterback and the highest-ranked, uncommitted signal-caller in the Class of 2020.

Stroud, who unofficially visited Ohio State in early October, will come to town with his mother. Her preference has been that Stroud remain closer to home for college. So for the Buckeyes, this weekend provides an opportunity to show the entire family that the 6-foot-3, 195-pound quarterback will be taken care of and developed on the field and off by Ohio State.

Why is C.J. Stroud so important for Ohio State?

Despite the long-term commitment from Jack Miller, who will sign with the Buckeyes next week and enroll in January, it’s been imperative for Ryan Day to add a second quarterback to the Class of 2020 for months — at least since Matthew Baldwin opted to transfer from the program.

It took a while to settle on another quarterback. But by the time Stroud had become a national name in June after winning the Elite 11 Finals, it was clear that he had become the primary target for Day. The Buckeyes were one of the biggest programs to get involved with Stroud this summer, and their involvement helped turn him from a prospect considering Kansas State and Baylor into a guy considering Georgia, USC, Michigan and a host of others.

Would Stroud have become a hot national commodity without Ohio State’s involvement? Yes, probably. But it’s impossible to ignore the impact that the Buckeyes have had on turning him into the most coveted quarterback in the country by teams still looking for one. Simply put, when Day wants a quarterback, that guy seems to get a lot of attention elsewhere, too.

But for Ohio State, this isn’t about ego or the amount of time invested. No, this is about numbers pure and simple. The Buckeyes have Justin Fields on the roster in 2020, and they will also have Gunnar Hoak and Jack Miller. But without the addition of Stroud, there would be only Jack Miller and 2021 commitment Kyle McCord on the roster grid following next season. That’s just not enough.

Sure, there’s a chance to make another transfer-portal play if Stroud ends up elsewhere. But failing to recruit and develop a program’s own players is a dangerous game to play at the game’s most important position.

If it’s not C.J. Stroud for Ohio State, then who is it?

This is where things get pretty tricky for Day and the Buckeyes, especially if the goal is to avoid the transfer portal. That appears to be the preference, because otherwise there’d likely not have been the months-long push to land Stroud.

Ohio State has offered only one potential complementary quarterback other than the Rancho Cucamonga standout: Hawaii 3-star prospect Jayden de Laura. While de Laura is committed to Washington State, he’s not planning to sign his Letter of Intent until February. That at least provides the Buckeyes a little time to reorganize their approach if Stroud ends up picking another school.

If it’s not Ohio State, then who is it?

One of the biggest challenges in recruiting is when a certain school is the presumed leader for a national prospect. When every other school in the country has a clear target to recruit against, it’s harder for that lead school to know which programs to really gird themselves against.

Ohio State is recruiting Stroud and trying to hold off schools like Oregon, USC, UCLA, Georgia and Michigan. Meanwhile, each of those programs can focus solely on recruiting against the Buckeyes.

But time is running out, and only one school can land Stroud. While things are shaping up nicely for the Buckeyes to this point, Georgia and USC seem to be the most realistic threats to upend Ohio State right now.

Georgia, if Jake Fromm were to bolt for the NFL, provides an even clearer path to potential playing time for Stroud. USC is the hometown team , which could appease Stroud’s mother. But the Trojans will have a true sophomore starting quarterback and with a redshirt sophomore with previous experience competing against each other in the spring to lead that program into the foreseeable future.

For now, it’s the near future that matters — as in the next week. Ohio State is set to host Stroud, to take a final swing before the start of a five-week-long recruiting dead period arrives.

We’ll know next Wednesday if that final swing is enough to connect with C.J. Stroud.

Ohio State appears set on defensive line, ready to move on to next cycle
Who could still join Ohio State recruiting class of 2020?