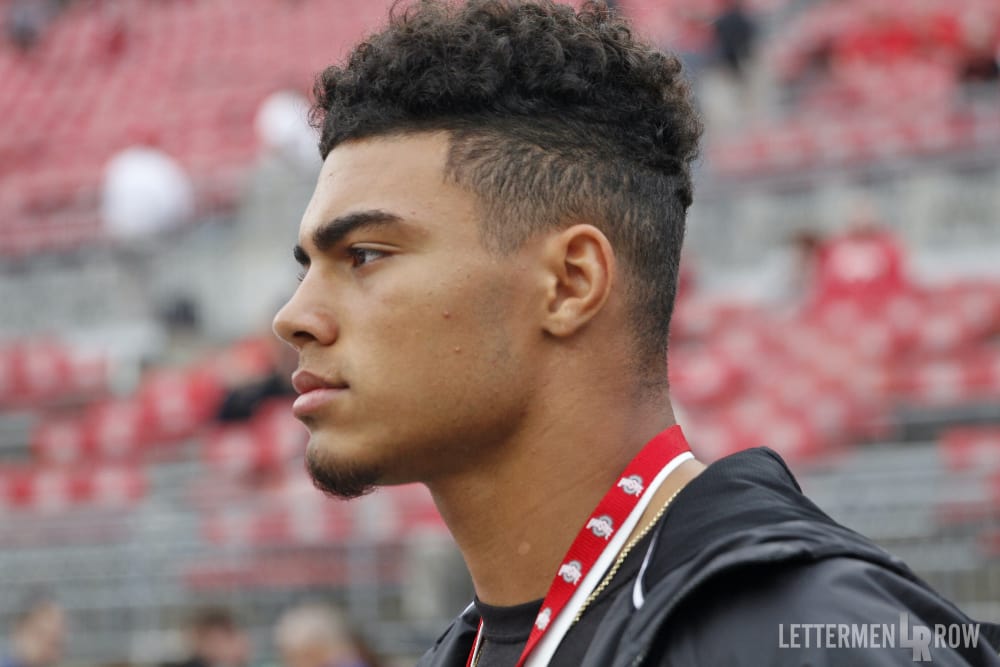 Stay in touch or be left out because Ohio State recruiting is a 24-hour, seven-day-per-week obsession. What’s the latest news as the Buckeyes build for the future? Get that and more Sunday through Thursday on Lettermen Row, including Brenton Strange’s commitment to Penn State and Ohio State offers a new 2019 offensive tackle.

The first domino to fall from the huge recruiting weekend at Penn State wasn’t ideal for Ohio State.

Brenton Strange, a 4-star tight end from Parkersburg (W.V.), committed to the Nittany Lions on Monday night, ending the Buckeyes pursuit of Strange as the second tight end in their 2019 class.

My next chapter .. #WEARE19 pic.twitter.com/ewZwQ4gBHd

The 6-foot-4, 220-pound athlete told Lettermen Row following his recent visit to Ohio State for the Tulane game that he intended to take an official visit with the Buckeyes in early November, but that is now off the table. For Strange, it came down to the role he feels he could play in the Penn State offense.

“The atmosphere was amazing and just added on to what I liked about Penn State,” Strange told Lettermen Row on Tuesday morning. “Ultimately when I knew I wanted to become a Nittany Lion was when [Penn State tight ends] Coach [Tyler] Bowen and I sat down and broke down film. I felt like the way they use their tight ends fits me perfectly.”

The Buckeyes were understandably disappointed by Strange’s decision, but supportive nonetheless. Strange noted that Mark Pantoni, Ohio State’s director of player personnel reached out to congratulate him on his choice.

The Buckeyes have a commitment from a tight end, adding Memphis (Tenn.) Whitehaven 3-star prospect Cormontae Hamilton in late July. Ohio State remains in the mix, albeit on the periphery, for California 4-star tight end Isaiah Foskey, who has suggested that he’d like to take an official visit to Columbus. He has only taken one official visit to this point, and nothing is scheduled yet with the Buckeyes. I would be more surprised if he did visit at this point than if he didn’t.

There’s a new name to watch along the offensive line in 2019.

Thrilled to receive an offer from THE Ohio State University! #Buckeyes pic.twitter.com/hP1ksyjpBa

Northwestern legacy Nick Broeker is an Ole Miss commit who was offered by the Buckeyes on Monday night. Broeker is a 6-foot-6, 285-pound lineman at Sacred Heart Griffin High School in Springfield, Ill. The offer was received during a conversation with Buckeyes offensive line coach Greg Studrawa on Sunday night.

“Coach Stud called me and was straightforward and told me [about the offer,]” Broeker told Lettermen Row. “The interest [from Ohio State] started last spring, but the interest dropped off after I committed and picked up last week.

“They just communicated over the phone last spring, they never did an [in-person] evaluation. I spoke with Coach [Urban] Meyer briefly on the phone last night. It was definitely special to be able to speak with him.”

The offer from Ohio State is the 19th for Broeker, and from here the message from the Buckeyes is simple.

“The message yesterday is that they want me to take an official,” he said. “I’m definitely intrigued by the offer. Ohio State is a great program, but I am still committed to Ole Miss.”

Until or unless a visit happens, there’s not a lot of reason to speculate too much on what happens from here. The discussions about a potential visit have begun, and he’s making sure to keep the Ole Miss coaching staff plugged in.

“I had a long conversation with [Ole Miss offensive line] Coach [Jack] Bicknell last night,” Broeker said. “The most important thing is my high school football schedule. I am working around that right now.”

The Buckeyes are making a move on another in-state offensive lineman: Strongsville’s J.D. Duplain has been offered by Ohio State.

Excited to receive an offer from The Ohio State University pic.twitter.com/KZoycA7krk

Duplain is a 6-foot-5, 290-pound interior lineman and is currently committed to Michigan State. The Buckeyes had previously offered Spartans commit Nick Samac, a teammate of Ohio State commits Ryan Jacoby and Noah Potter at Mentor High School. But this offer to Duplain may end a bit differently than the endeavor to flip Samac.

The Ohio State offer is the 26th for Duplain. I believe this recruitment will end with him signing with the Buckeyes. Stay tuned for more on his recruitment soon.