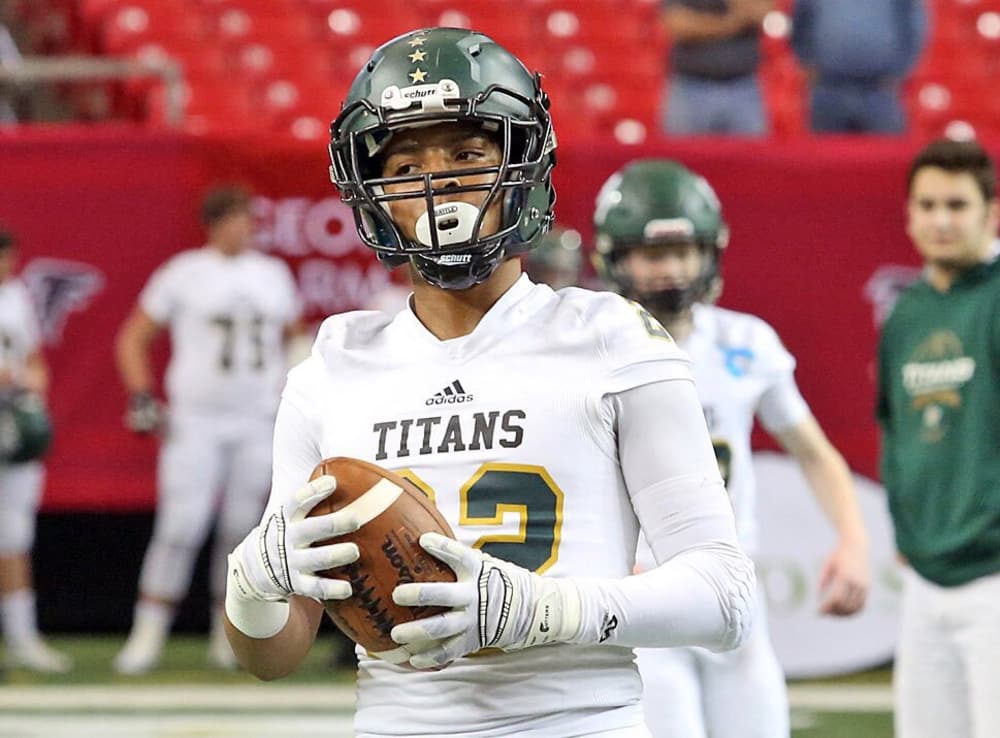 The Urban Meyer investigation and swirling drama has other schools circling and trying to pry the touted prospect away from the Buckeyes.

“All the schools,” Chambers told Lettermen Row. “A few have really been calling a lot, but most have reached at to let me know they are here if I open up my recruitment again.

“They don’t really talk to me about Ohio State. Just say they are here for me.”

That’s a fair and smart approach, if it’s the common one. There’s nothing to be gained by trying to ridicule or badmouth a player’s choice, especially when the coaches he’s come to know, trust and love are going through a difficult period. It’s the relationships with the Ohio State coaching staff that has Chambers solid in his pledge at this point, despite that difficult time. He has no interest, at this point, of re-opening his recruitment.

After scoring four touchdowns in last weekend’s game against St. Pius, Chambers would like to clear up one thing though: He’s absolutely intending to play tailback at Ohio State, not linebacker.

“Michigan was recruiting me for the viper position,” Chambers said. “I had tough choices, but I like [Ohio State running backs] coach [Tony] Alford and feel the sky is the limit under his guidance. I am a running back who happened to be good a linebacker, but I have always been committed to Ohio State as a running back.”

Bryson Shaw only wants to hear from Ohio State

Chambers isn’t the only Ohio State verbal who has been contacted by other schools, of course. We’ve detailed a few of them over the last few weeks, but today Lettermen Row finally caught up with Bryson Shaw, the 3-star defensive back from The Bullis School in Potomac, Md. Shaw, a former Wisconsin verbal, lays pretty low on social media, but that’s not stopped programs from reaching out to him, including one of the program’s biggest rivals.

“Penn State and Virginia,” Shaw told Lettermen Row. “Those two have been on me pretty hard.

“I want to be a Buckeye, though. I’ve not given it a second thought.”

That’s encouraging news for Ohio State fans, who have endured a wild Wednesday full of rumors and reports about what could happen to Meyer. Over the last three weeks, Ohio State assistants have been regularly in touch with Shaw and the rest of the verbals, primarily defensive coordinator Greg Schiano and safeties coach Alex Grinch.

“Yes, those two stay on me the most,” Shaw said. “I love them. [Acting head coach Ryan] Day has been calling a lot recently also.”

Much has been made of Shaw’s eventual position at Ohio State, again similarly to Chambers. There’s no doubt he’ll play defensive back for the Buckeyes, but exactly where is kind of up in the air. For his part, the 6-foot-2, 175-pound athlete doesn’t really care.

“Coach Grinch sees me as a safety,” he said.”Coach Schiano has said he thinks I could play corner. It’s whatever they want. I just want to be one of the Buckeye greats.”

Shaw, the country’s 45th-ranked safety by the 247Sports.com composite rankings, has scheduled his official visit to Ohio State for the home game against in Michigan in late November. He also hopes to visit the Buckeyes during his team’s off week.

The folks at 247Sports updated their early recruit rankings for the Class of 2020 on Wednesday and a couple of Ohio State verbals saw some adjustment to their place in the world.

The biggest riser is New Jersey’s Luke Wypler, who moved up 59 spots from No.76 and is now the country’s 17th-ranked 2020 player. Here’s how the rest of the Buckeyes 2020 verbals fared.