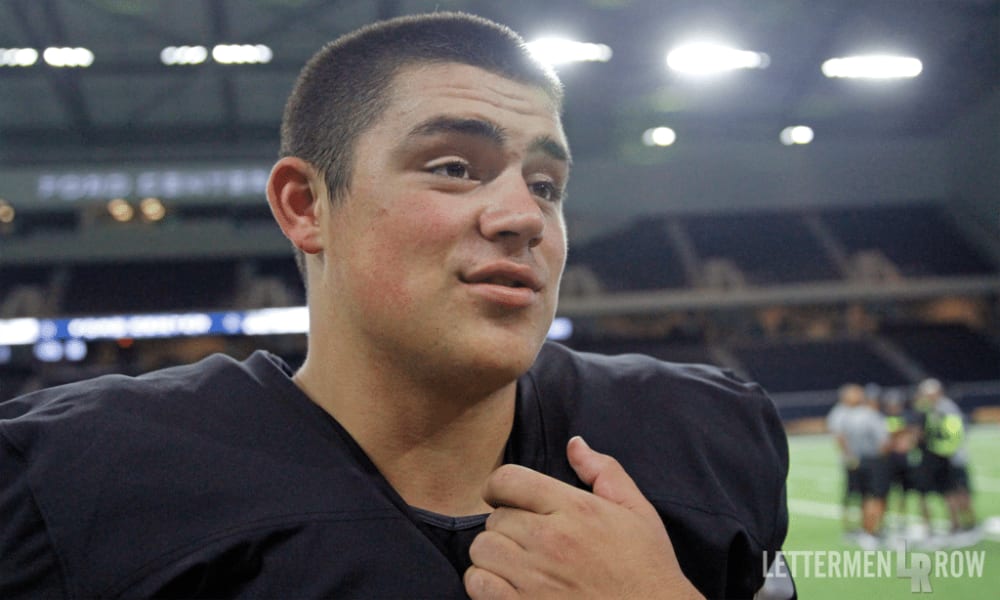 Ohio State will host the country's top-ranked 2020 prospect when it takes on Tulane. (Birm/Lettermen Row)

The day Ohio State fans have been waiting for finally arrived on Monday in Columbus: Urban Meyer is back at the helm for the program. And with his return, a sense of relative normalcy can come back as well.

We’ve talked for the last seven-plus weeks about Meyer’s suspension, his absence and the impact on the Buckeyes on the field and off. Meyer’s involvement in the day-to-day recruiting operations that take place at Ohio State are hit-and-miss. But his shadow is long and his influence touches every single detail of the program, especially as it pertains to recruiting. During his almost hour-long press conference on Monday, Meyer tried to be as transparent as possible when detailing how things have unfolded, including how hurt he is knowing that the school and his program have been hurt by it as well.

“I think there was [damage],” Meyer said. “I’ve already had conversations with recruits and families of our players. We sent out several letters to the families. But to say there’s not damage, there was.”

That damage was at least partially responsible for the decommitment of linebacker Kane Patterson. The damage has helped make it easier for schools like Oklahoma to swoop in and change the mind of targets like Texas athlete Peyton Powell, who was close to committing to Ohio State prior to Meyer’s administrative leave. Exactly how damaging all of this was remains to be seen, especially when you consider players like 5-star defensive end Zach Harrison, who remains mum on the saga and most everything else in his recruitment.

Recruits from coast-to-coast choose the Buckeyes because of Meyer’s reputation. His history and success have launched one of America’s most successful college football programs into a different stratosphere in the last seven years, and the hit his reputation has taken will leave a mark.

Every day in Columbus that Meyer can focus on football, that he can focus on his team, is one day closer to things being reset at Ohio State. This coming weekend when he leads the Buckeyes out onto the field at Ohio Stadium, he’ll do so with dozens of recruits, commits and their families in attendance, showing him that they still believe he’s the right man to lead them into the future.

That’s all he needs.

Speaking of trying to get back to normal, the Buckeyes will do that by hosting one of the country’s best prospects when they host Tulane this coming weekend.

Defensive lineman Bryan Bresee, a 5-star talent in the 2020 class, will head to Columbus and take in the sights and sounds of Ohio Stadium for Meyer’s return.

The visit will be the first of two consecutive weeks where the 6-foot-5, 290-pound Bresee will see the Buckeyes. He’ll also be at Penn State on Sept. 29 as the Nittany Lions host the Buckeyes. This weekend’s trip is a chance for him spend a little time with Larry Johnson and the Ohio State staff, something he’s not done since last October.

“I’m excited to see all the coaches again,” Bresee told Lettermen Row. “I really like Ohio State so I wanted to check it out again.”

At Nike’s The Opening in July, Bresee expressed some concern about the longevity of Larry Johnson.

“[The relationship with Johnson] is good, it’s really good,” he said then. “I think the only problem with him is that I don’t know how long he’ll be at Ohio State, because he’s getting older. I think he’s one of the best coaches out there.”

Johnson is one of the finest position coaches in America, and that’s hardly up for debate. What has been up for debate in recent months is whether or not he’s looking to retire soon, which a number of schools have suggested to Bresee and other recruits in the last year. Right now Bresee feels confident Johnson isn’t going anywhere.

The Buckeyes are working hard to land Catawissa (Pa.) Southern Columbia 5-star wide receiver Julian Fleming and have also been in touch recently with his teammate, athlete Max Tillett.

Tillett currently has no offers, but the safety/linebacker prospect has been hearing from a couple of big-time schools around the country.

“A lot of colleges are contacting me now,” Willett told Lettermen Row. “I’ve talked with [Ohio State director of player personnel] Mark Pantoni and just touched base with Ohio State.

“They said they like what they see in my film. I’ll be heading to a couple games there soon. I’m pretty sure I’m going to the Nebraska and Michigan games. I’m really hoping they’d offer me”

The Buckeyes are one of the early favorites for pretty much any high school football player in the Midwest, and that’s especially true for players that grew up without any natural lure to another team. Despite growing up close to Penn State, Willett didn’t find himself rooting for anyone when he was younger.

“I never really had a team growing up,” he added. “I just really watched whatever the best game that was on.”

One of the main reasons the 6-foot-tall, 190-pound Willett doesn’t yet have an offer is his lack of a true position. Of course, he’ll play whatever spot the teams recruiting him want him to.

“I’d play whichever position to help them,” he said. “I’d say I’m more comfortable at linebacker, so like an outside linebacker where I could do both with covering is my preference.”

Speaking of Fleming, if you’re a Rivals.com subscriber, make sure you check out this update on him from friend of the site Marc Givler, who was in Catawissa this past Friday. Fleming will definitely make the visit to Columbus in November for the Michigan game with Willett, but there’s an outside chance he’ll be there for the Nebraska game as well.