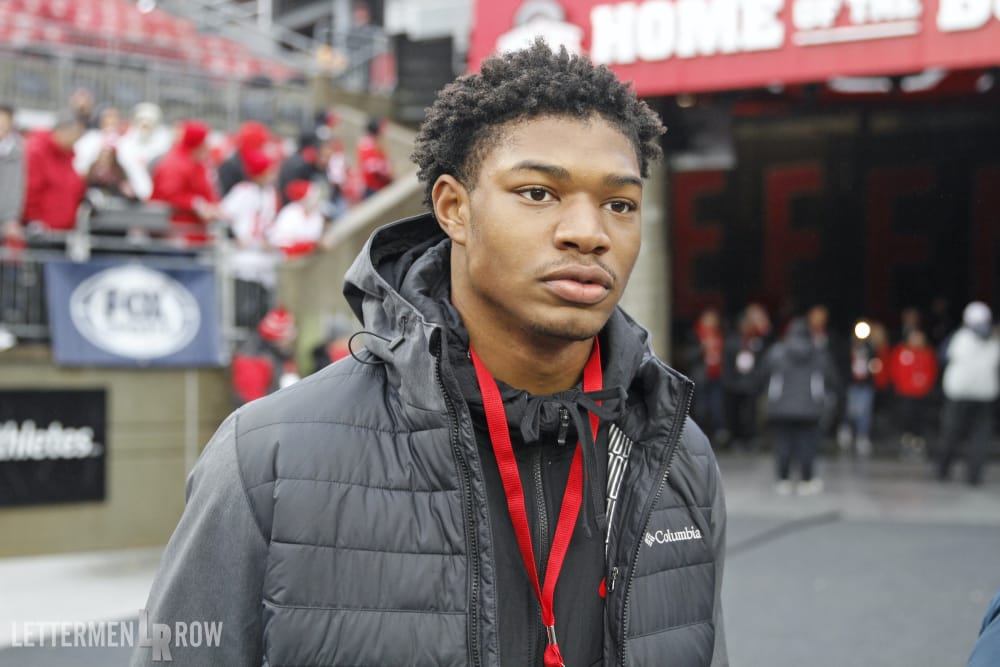 Mekhail Sherman has the Buckeyes in his final group of schools. (Birm/Lettermen Row)

Stay in touch or be left out because Ohio State recruiting is a 24-hour, seven-day-per-week obsession. What’s the latest news as the Buckeyes build for the future? Get that and more Sunday through Thursday on Lettermen Row, including tonight’s update on a pair of 5-star 2020 prospects in Mekhail Sherman and Bryan Bresee.

Ohio State in the final group for Mekhail Sherman

The Buckeyes have been a major contender for  St. John’s College (Washington D.C.) standout Mekhail Sherman for months, and he made that somewhat official over the weekend when he announced his top-seven schools.

LUCKY 7! Committing in the summer of 2019…. pic.twitter.com/KKxjqtcXXe

The country’s second-ranked outside linebacker prospect, Sherman has been to Ohio State twice since the summer and has not hidden how strongly he’s considering the program.

“The thing that stood out the most was the chance to build relationships with the coaching staff over those two days,” Sherman told Lettermen Row after his first visit. “They pulled me in on the academics at the school. My major sits No. 1 in their program. That’s definitely a plus.”

There are months before a decision is to be made, but the Buckeyes are the clear-cut leader for Sherman according to the 247Sports.com crystal-ball feature. He’s become very close to Urban Meyer in recent months, telling Lettermen Row in late October that Meyer was the only coach he reached out to following a surgery to repair a torn ACL.

“Urban Meyer was one of the first people I called right after my surgery,” Sherman said. “Just him being there for me.”

Asked how many other college coaches Sherman tried to connect with as he emerged from the surgical haze, Sherman was quick to reply.

“Nobody else except for my high school coaches,” he said. “Other coaches did text me, though.”

There’s work to do and months to fight off other suitors, but the Buckeyes are in good shape here for this 2020 5-star prospect.

Sherman was not the only Maryland-area standout in the Class of 2020 to announce a list of top schools this weekend, as 5-star defensive end Bryan Bresee did the same.

While the Buckeyes are sitting in a good spot with Sherman, there will be a lot of work ahead if they hope to get into a leading position with the 6-foot-5, 290-pound Bresee, who is ranked as the country’s top overall prospect in his class.

Penn State, Georgia, Clemson and Alabama all received visits during the 2018 season, as did Ohio State. But rumors around the future of Larry Johnson and Urban Meyer have done the Buckeyes no favors as Bresee considers other options that appear more stable from the outside. It will be uphill for the Buckeyes from here. But Johnson’s relationship and efforts with Bresee goes back a few years now, and that is where Ohio State will need to build from.

The Buckeyes offered Bresee in June of 2017.

There were so many big-time visitors for the Buckeyes when they beat Michigan, it’s almost impossible to stop updating how those trips all went.

Atlanta Pace Academy wide receiver Jayden Thomas was there, and the unranked 2020 prospect with offers from Ohio State, Michigan, North Carolina and Virginia said the trip blew him away.

“It was nice up there — I’m not sure what I expected, but it was better than I thought it’d be,” the 6-foot-2, 185-pound Thomas told Lettermen Row. “The pregame pep rally was intense, and the fans on the way to the stadium were also.

“The crowd was into every play the whole game. It was louder than anything I have ever heard.”

Thomas has been recruited by offensive coordinator Ryan Day, but because of the craziness on the field postgame and the nature of the game prep beforehand, he didn’t get much time with the Ohio State staff that day. He wants to return to the school in the near future for a more comprehensive visit.

“I didn’t spend much time with coaches,” he said. “I will visit again. I’d like to see more of the campus outside of football.”

The Buckeyes hosted Florida State commit Renardo Green for an official visit last week, and Ohio State has quickly become the 247Sports.com favorite to land the 3-star cornerback with every prediction made now favoring the Buckeyes.

This week, Ohio State coaches will make an in-home visit with the 5-foot-11, 175-pound Green in what they hope will put the finishing touches on a potential flip. Taver Johnson will visit the country’s No. 46-ranked cornerback on Wednesday night.

Ohio State has one true cornerback committed to this point in 2019, and Green would be a solid late recruiting cycle addition.