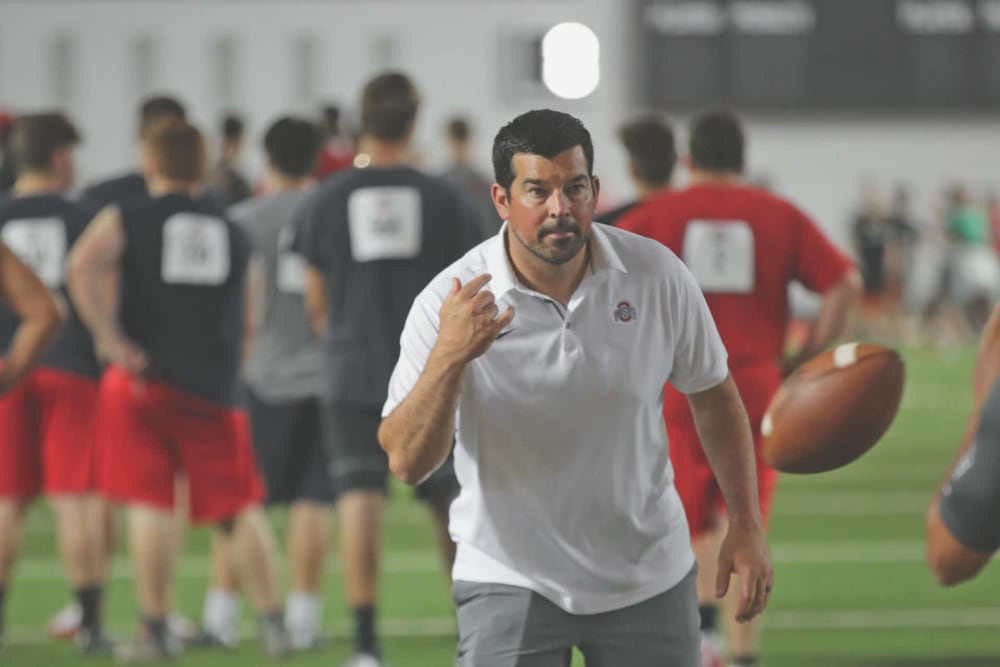 Ryan Day and the Buckeyes are finding some challenges in quarterback recruiting. (Photo: Birm/Lettermen Row)

Graham Mertz out, so who is in?

The quarterback recruiting dilemma for Ohio State and the Class of 2019 grew significantly larger on Thursday night. Ohio State’s top target at the position, Wisconsin commit Graham Mertz, appeared to end any speculation about his recruitment.

That’s not entirely surprising, because Mertz has been saying on the record that he was solid with the Badgers. However, both Ohio State and Stanford were expecting him to visit next week as recently as Wednesday of this week, so something changed with Mertz on Thursday, as is his right.

If we take him at his word and move on, then the Buckeyes next man up could be Brian Maurer.

A big-armed quarterback at 6-foot-4 and 185-pounds, Maurer is an Elite 11 finalist who will participate at Nike’s The Opening in Dallas at the start of July. He will make his first visit to Columbus the weekend of June 22 – he’ll camp at Friday Night Lights with the Buckeyes – and you could see him quickly become the top target at the position for Ohio State moving forward. Maurer has offers from Florida, West Virginia, Texas A&M, Central Florida and others. He’s the country’s No. 18-ranked pro-style quarterback.

Ryan Day and Ohio State have checked out Maurer multiple times this offseason and began talking with him early in the spring. It could be time to turn up the heat.

The Buckeyes have made St. Louis (Cardinal Ritter College Prep) 2019 wide receiver Jameson Williams a priority throughout much of the last few months and on Thursday night, he returned the favor by keeping them in his Top 5 schools list.

Williams, 6-foot-2 and 160-pounds, is set to take his official visit to Ohio State the weekend of June 22. All seven of the 247Sports.com crystal ball predictions found on his recruiting profile are in the Buckeyes favor. He’s the country’s 26th-ranked prospect and a Top 150 player nationally.

As a junior, Williams caught 36 passes for 1062 yards and 19 touchdowns. He’s a big-time homerun threat on the outside, regardless of what you may think about the competition he faces at Cardinal Ritter.

Ohio State will host a third St. Louis wide receiver for Friday Night Lights. Aside from the aforementioned Williams and 4-star Marcus Washington, the Buckeyes will welcome in 3-star prospect CJ Boone.

Boone is a new name on the recruiting front for Ohio State, but he has offers from Missouri, Minnesota, Purdue, Kansas and Kentucky, along with a few others. He’s 6-foot-3 and 170-pounds and told Lettermen Row that he’s just recently heard from the Buckeyes following a satellite camp performance.

“I haven’t heard from them for too long,” Boone said. “The coaches were at the Lindenwood camp here and watched me do good during 1-one-1 stuff. That and I ran a 4.32 40-yard dash in front of them.”

That’s one way to get the attention of Ohio State. The Buckeyes are likely looking to add at least three more wideouts in 2019. Could they all end up being from St. Louis?

There’s a big-time prospect developing at Norwalk (Ohio) High School and his name is Trey Leroux.

Leroux, 6-foot-7 and 318-pounds, visited Ohio State on June 8 for a one-day camp with the Buckeyes.

“It was great,” Leroux said of the trip to Columbus. “I love their staff and the campus.”

Right now, Leroux has just one offer – from Toledo – but the Buckeyes gave him some good attention during his recent visit.

“They took me into the office and we talked,” he said of Ohio State. “They said that I’m the mold that they want for a Buckeyes lineman and they loved how I moved, and was agile while being as big as I am.”

The Ohio State staff will see Leroux again this summer. So to will the Michigan Wolverines and former Buckeyes assistant Ed Warinner.