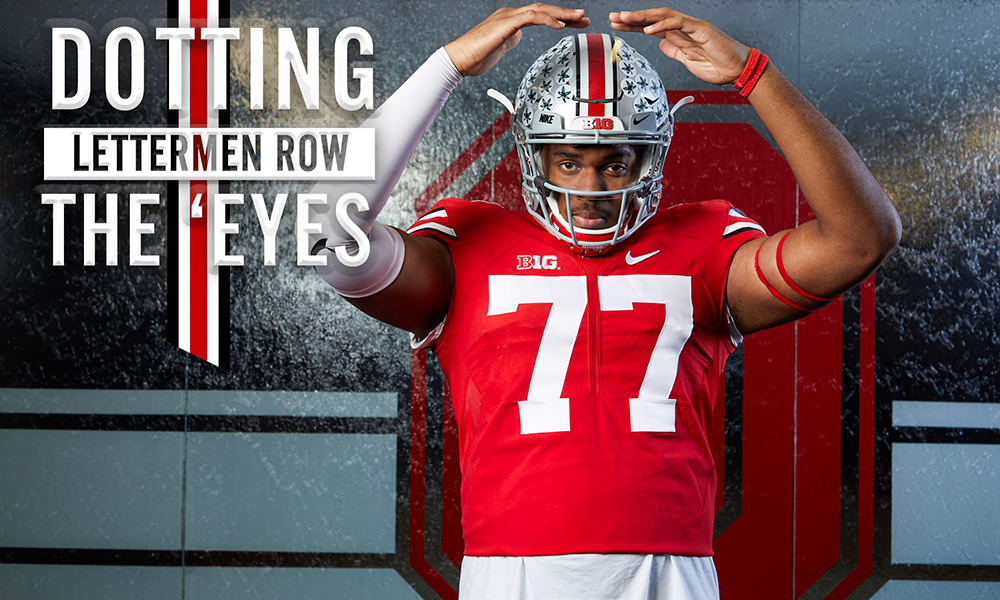 Stay in touch or be left out because Ohio State recruiting is a 24-hour, seven-day-per-week obsession. What’s the latest news as the Buckeyes build for the future? Get that and more Sunday through Thursday on Lettermen Row. Today’s update calls for patience with Paris Johnson, who continues to visit other schools.

Last spring, Paris Johnson took visits all around the country to decide what college would fit him best. He talked about that trip with Lettermen Row and how going on those visits helped him realize why Ohio State was ultimately the right choice.

After committing to the Buckeyes last summer, Johnson took on the mantle of class leader, making his way to Columbus every weekend through the football season to spearhead game-day recruiting efforts. He attacked social media every chance he could to talk up the Buckeyes with recruits he and the Ohio State coaching staff want in Columbus.

When Urban Meyer retired, Johnson was understandably shaken and his recruitment was bound to get bumpy.

It’s not ideal. It’s not comfortable for Ohio State to watch its prized commitment, a class leader, posting photos of himself at SEC schools like Tennessee with cheesy taglines for retweets and likes. But that is the situation right now as Johnson and his close friends, Darrion Henry and Jaheim Thomas, make a southern road swing.

Recruiting is messy and ugly. And though there’s no way to prove this thought correct, I don’t doubt at all that Johnson would still be taking these trips if Meyer were still at Ohio State. A top-10 recruit who commits as early as he did is always going to draw attention from other schools, and it’s extremely hard for 16-year olds and their families to turn a blind eye to the attention, publicity and the love.

Ohio State would love for Paris Johnson to stop the online shenanigans. I don’t think it takes a brain surgeon to figure that out, but when dealing with a player of this profile, the leverage is with the player. That means there will be more and more of these trips from even the most solidly committed kids and families.

To repeat: It doesn’t feel good, and there’s no doubt Ryan Day and the Buckeyes would prefer it stop. But this is the new era of recruiting, and players have every right to visit where ever they want, whenever they want.

The Buckeyes will continue to hope that honest, real relationships are built by Day and his staff, and eventually that will give Johnson the confidence that he has everything he needs in Columbus — still.

The country’s top-ranked 2021 told Lettermen Row at the time that he was hoping for an Ohio State scholarship offer.

“I have a lot of interest in Ohio State,” he said then. “I want to take a visit up there. It would be a blessing to hear from Ohio State.”

The Buckeyes have been in touch, and it’s been primarily linebackers coach Al Washington, who is now recruiting the Virginia region for Ohio State. On Friday, Ohio State offered the 6-foot, 180-pound defensive back.

Washington extended the offer to Grimes, who visited Clemson this weekend and will be making his way to Ohio State soon.

“Soon, really soon,” Grimes said. “But we have no planned date yet.”

Ohio State’s football team was on spring break last week, but the coaches were not. They were evaluating some young players from around the country, and aside from the offer to Grimes, the Buckeyes also pulled the trigger on an offer to 2022 prospect Gavin Sawchuk from Valor Christian (Littleton, Colo.) — the fourth offer to the young star.

Blessed to say I have received an offer to play football at The Ohio State University. Huge thanks to @ryandaytime & @CoachTonyAlford and the rest of the staff for this opportunity. Thanks to the entire coaching staff at valor #GoBuckeyes #weaponx @GoValorFootball @valorsportsnet pic.twitter.com/Xpmh5ufojw

Tony Alford usually handles the recruiting for Ohio State in Colorado, and he was the coach who helped facilitate the offer to the 5-foot-10, 170-pound Sawchuk. Ohio State joins Michigan, Penn State and Oregon on his offer list.

Sawchuk is a teammate of Buckeyes 2020 target Roger Rosengarten, who will visit the school this week.

Let’s stick with new offers ahead of this week’s return to the football field at Ohio State.

Granby (Norfolk, Va.) 2021 defensive tackle Katron Evans, the country’s No. 2-ranked interior lineman in his class, also picked up a Buckeyes offer over the weekend.

The country’s 17th-ranked prospect in 2021, Evans is a potential 5-star player as he develops over the next two years. He’s a 6-foot-4, 265-pound sophomore and is now approaching almost 30 scholarship offers, making him one of the country’s most sought-after young players.

This will be a national battle as it unfolds, so it will be all about Ohio State getting him to campus early to start building a relationship with Larry Johnson. He’s already been to schools like Clemson and Florida, so the Buckeyes will need to move quickly.