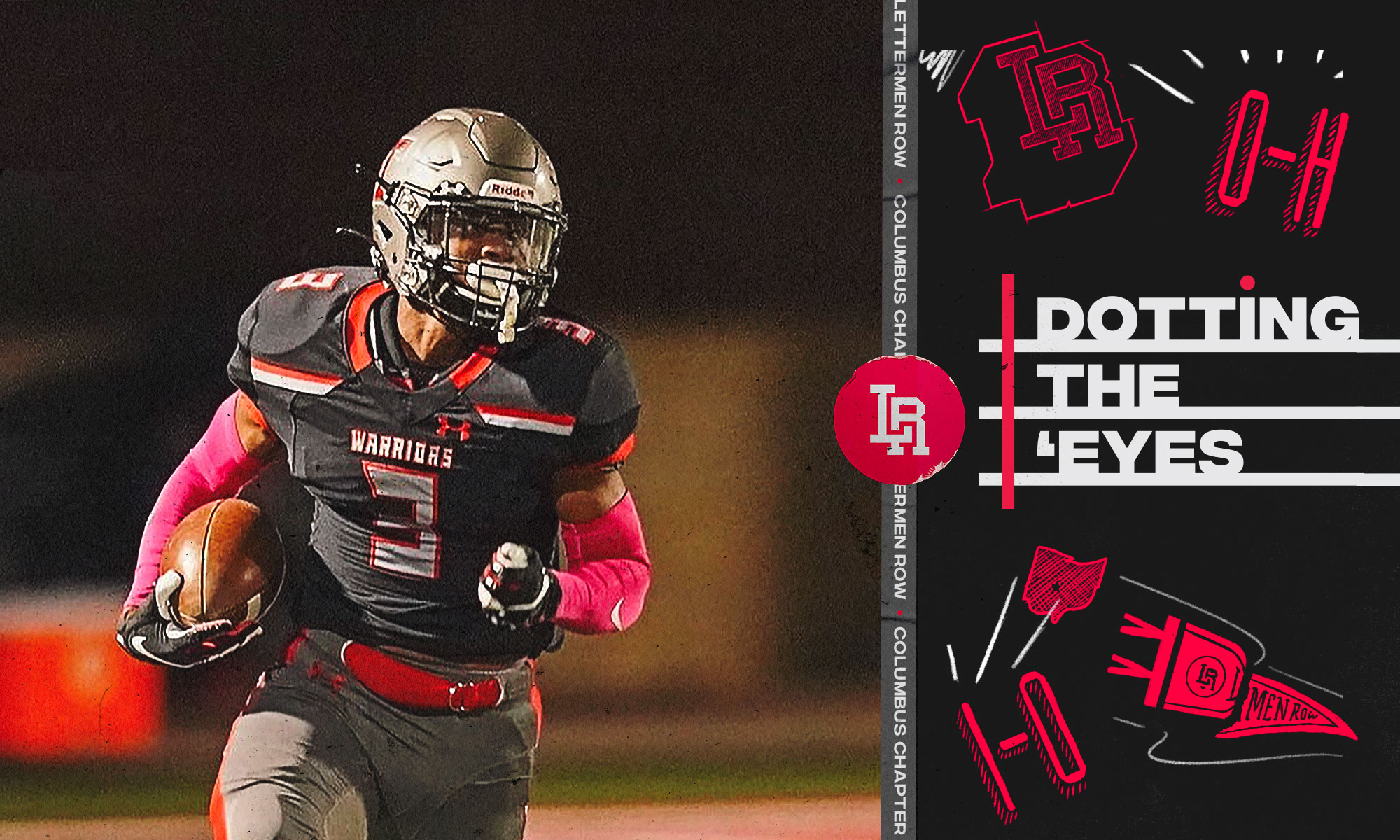 Stay in touch or be left out because Ohio State recruiting is a 24-hour, seven-day-per-week obsession. What’s the latest news as the Buckeyes build for the future? Get that and more Sunday through Thursday on Lettermen Row. Today’s notebook has an update on the country’s top-ranked 2023 cornerback and another pair of interesting 2023 prospects.

“I just got the offer from Ohio State,” Mitchell told Lettermen Row late Tuesday. “It’s major. [Defensive coordinator] Kerry Coombs offered me. He’s a very cool and funny guy. We talked for about 20 minutes, just about life and family.”

That conversation with Coombs was the first for the 6-foot-2, 180-pound corner from Thompson (Alabaster, Ala.) High School. The Buckeyes don’t usually extend offers to players of his profile in Alabama, believing that most kids with Ohio State-type-talent from that area choose to stay home. But Mitchell is originally from Florida and doesn’t have a built-in allegiance to the Crimson Tide or the Auburn Tigers. Perhaps unfortunately for the Buckeyes, he did grow up dreaming of suiting up for another big-time national rival.

“I’m originally from Florida and I don’t have a favorite college football team, really,” Mitchell said. “But Clemson is my dream school, so I’d say them if I had to pick a favorite team or someone that I rooted for. I just always liked them since they had Deshaun Watson, Mike Williams, Deandre Hopkins and Sammy Watkins. They’ve been showing me major love since my freshman year. It’s just different up there.”

Ohio State now has to work to give that love to Mitchell. But with restrictions in place on contact, it’s not as easy as just extending the offer. Interestingly, Coombs made a point to tell him not to expect much conversation from the Buckeyes until next September. Until then, it’s the reputation of the Ohio State program and its history of defensive back development that will have to do the majority of the talking.

The Buckeyes have been busy offering top-ranked sophomores over the past week and extended another one on Wednesday morning to Broad Run (Ashburn, Va.) High School offensive lineman Alex Birchmeier.

The offer from Ohio State comes a day after Notre Dame offered the 6-foot-5, 265-pound tackle, who is currently ranked as the No. 1 overall player in Virginia in the Class of 2023. He now has 13 offers. Buckeyes offensive line coach Greg Studrawa extended the offer.

Kids from Ohio usually grow up dreaming of playing for the Buckeyes, and that’s definitely the case for Denmark (Alpharetta, Ga.) High School linebacker Dee Crayton. The 6-foot-2, 210-pound 2023 prospect has started to see his recruitment speed up — Syracuse and Florida State have offered, with the Seminoles offer coming Tuesday night — but his Ohio roots have him wondering about his former home-state school.

“I’m originally from Cleveland,” Crayton, who is currently unranked nationally, told Lettermen Row. “I’ve always been a fan of Ohio State. That’s my dream school. I moved down to Georgia when I was six, but my whole family is still up there. I grew up watching guys like Ryan Shazier, Ezekiel Elliott, Chase Young and Marshon Lattimore, too.”

Being a fan of the Buckeyes isn’t enough to get a recruit an Ohio State offer, of course, but the development on the field for Crayton could eventually garner him some attention he hopes. He believes part of the reason he’s not quite as well-known yet is because of a recent position change from offense to defense. He earned first-team all-region as a sophomore after 68 solo tackles and and 5.5 sacks this past year.

“I was the MVP at the Under-Armor All American Next game at running back,” he said. “A lot of teams were recruiting me as a running back and that slowed my recruiting down.”

At just 15 years old, there’s a bright future coming for Crayton. Whether or not that brings him back home to Ohio remains to be seen.