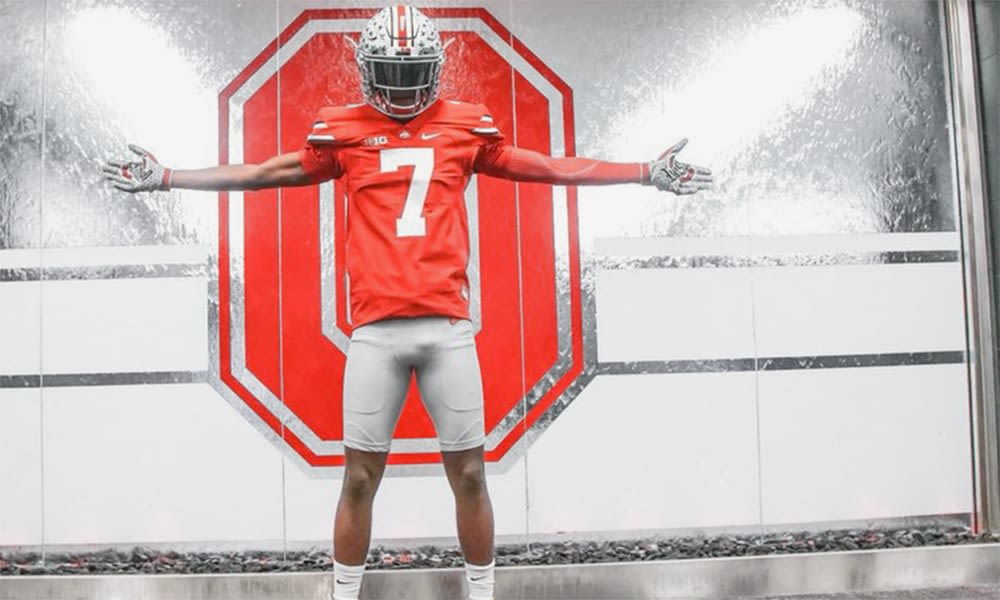 2020 defensive back Miles Brooks has Michigan roots but strong Buckeyes influence in his life. (Miles Brooks/Twitter)

Ohio State will have to contend with family ties to its biggest rival if it wants to land 2020 defensive back Miles Brooks.

But the Buckeyes have more than a fighting chance.

Brooks and his father, Marcus, may live in Jacksonville, Fla., but as the 4-star prospect from Trinity Christian told Lettermen Row earlier in the week, there are real ties to Michigan and the rival Wolverines.  grandparents grew up in Detroit.

His grandparents grew up in Detroit, but Brooks also has some connections and a couple of mentors that could work in favor of Ohio State thanks to the presence of cornerbacks Shaun Wade and Tyreke Johnson, two other products of Trinity Christian.

“We’re very tight,” Brooks said. “They are like my big brothers, my mentors. They’ve each taught me a lot. Relationships are always key in life, and I feel like the relationship I have with them may help me see things differently and allow for more comfort [at Ohio State] than some others schools.”

That comfort manifested itself over the weekend as the 6-foot-2, 171-pounder took in his first visit to Ohio State.

“The visit was great,” Brooks told Lettermen Row on Sunday. “I enjoyed every minute of it.

“It was good to see Shaun and Tyreke and good to spend a lot of time with them. They told me a lot about what’s it’s like at Ohio State and what it’s like at the next level, in college, period. They told me what to expect and how to better prepare myself for the next stage.”

Brooks, ranked as the No. 47 overall prospect in the Class of 2020, arrived in Columbus still waiting for a scholarship offer from the Buckeyes. But he wasn’t waiting when he left.

The offer he wanted came his way, and it’s a big one for him.

“The Ohio State offer was huge to me,” he said. “An offer from the Buckeyes has been a long-time dream and goal for me. To have received it is just a blessing to me.”

Is it time for dad and his family to start considering the possibility that Miles could end up at Ohio State? If that happens, he’s confident everyone will be happy for him.

“If I feel that’s where I want to go, he says he’s on board,”Brooks said. “He’s a great father and I know he always wants me to be happy.”

Stay ‘Crootin: What to know about Ohio State’s busy weekend before recruiting dead period
Devontae Dobbs is out, so who’s left for Ohio State at OT in 2019 class?
Advertisement
Advertisement