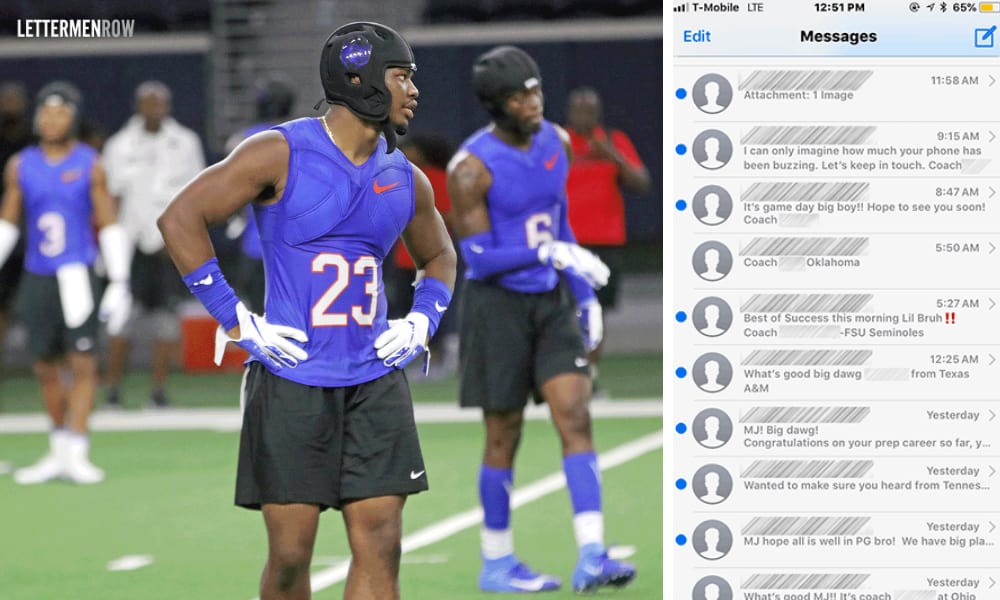 Mekhail Sherman, this is your new life as a recruit.

It’s Saturday morning and the calendar has flipped to the first day of September. And while that meant the start of a new college football season on the field for most teams, it was the officially the time to ramp up the game off the field for all programs when it comes to recruiting for the future.

“I can only imagine how much your phone has been buzzing,” a Big Ten assistant wrote on Saturday morning, one of almost 30 messages Sherman received. “Let’s keep in touch.” 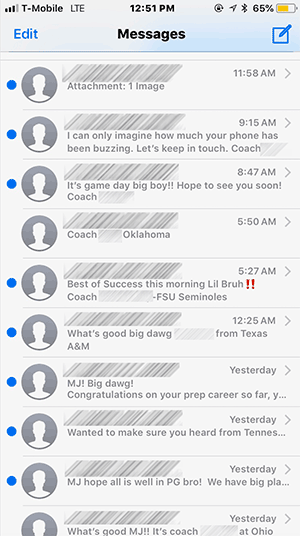 The lines of communication are now officially open for high school juniors who will eventually sign as members of the Class of 2020. And Sherman was one of two 2020 prospects who graciously opened up his phone and Twitter direct messages to Lettermen Row on Saturday, offering up a glimpse of life as a big-time recruit in the digital age of college football recruiting.

For the country’s second-ranked 2020 linebacker, it’s kind of old hat. Even with the new contact rules at the start of September, this isn’t Sherman’s first time dealing with recruiters. To be clear, Sept. 1 isn’t the first time college coaches can talk to rising-juniors, it’s when they’re allowed to talk to them directly, without a third party.

Text messages, direct messages and all other forms of private communication are permissible for the first time. It’s really when the rubber meets the road in a lot of recruitments, and the stream of contacts that come in following that calendar switch is usually a good indicator of what schools have made you a priority.

Again, players like Sherman already know this. It’s why he’s not stressing about who texts and who doesn’t, or how they reach out and when. Dozens of generic graphics are sent to players all over the country, impersonal and mass-delivered, but that doesn’t mean anything to him.

“I just try and focus on the schools I want to focus on,” Sherman told Lettermen Row. “I blame it on the game of recruiting, but I went into it all with a plan.”

On a Friday night at midnight, Sherman was in Alabama as he and his teammates from powerhouse St. John’s College High School in Washington (D.C.) were preparing for a game at Hoover (Ala.). As the clock struck midnight in the Eastern time zone, Sherman received nearly 20 direct messages on Twitter and another 10 or so messages via text, including from a pair of Ohio State coaches. The time zone difference is why some texts read “yesterday” on the time stamp. The number likely would’ve been far greater if the majority of college coaches weren’t asleep in their hotel rooms preparing for season openers on Saturday.

“I hope I’m the first to reach out to you,” the Ohio State assistant told Sherman. “This is my cell, so if you didn’t already have it, lock me in. Looking forward to letting you know what the Ohio State is all about.”

How did Sept.1 go for an Ohio State commit?

The buzzing wasn’t nearly as prodigious for Marietta (Ga.) offensive lineman and Ohio State verbal Jake Wray. He expected that. 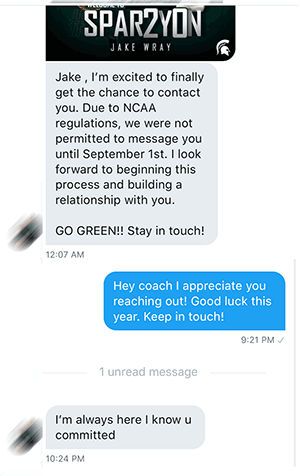 “I probably won’t have anywhere near as many as [Sherman],” Wray joked.

Turns out, he was right just as expected.

Wray wasn’t ignored, though. Over the course of the opening Saturday, he received double-digit messages, including a pair from Big Ten opponents of the Buckeyes. Apart from the quantity of messages received, the biggest difference between he and Sherman seemed to be the tone of the messages themselves.

At least from the perspective of the Spartans, there was no push, no need to try to take pot-shots at the program Wray is committed to as a recruit. That approach seemed to be focused on building relationships and establishing interest from the player, confirming it for him.

The Huskers tripled down, following up their initial message with another from a separate coach, then another from the school’s football recruiting account. That third message came complete with a personalized graphic showing an Apple Watch displaying an incoming call from new head coach Scott Frost and an iPhone X showing Wray’s No. 77 in Cornhusker red as its wallpaper.

“Jake,” the next direct message said. “The Future is Now! You’re invited to all our games Jake! This weeks game is big! RSVP ASAP if you are coming.”

Nebraska loves exclamation points, apparently, and that’s not surprising either. This is recruiting. This is sales. This is showing a young person that your program is on the move.

SEC programs, including a College Football Playoff team from last season, Big Ten programs and others messaged Wray. The fabled “Ohio State group message” lit up as every one of the young men involved in it shared thoughts on the interest they’d garnered throughout the day and provided insight for the other members — or cracked some jokes instead.

There’s a true sense of fraternity among today’s recruits. Kids are being put through the machine so early, so often, that if it weren’t for the ability to laugh with peers that are experiencing the same, they could be eaten alive by it.

Not every school that reached out received a reply. Some were told directly that there was not any current interest from the leader of Ohio State’s 2020 recruiting class.

“No problem, Jake,” one reply came back. “If you can make any of other games later this season, we’d love to have you up here.”

Does impersonal matter? Does any of it matter to an Ohio State recruit? 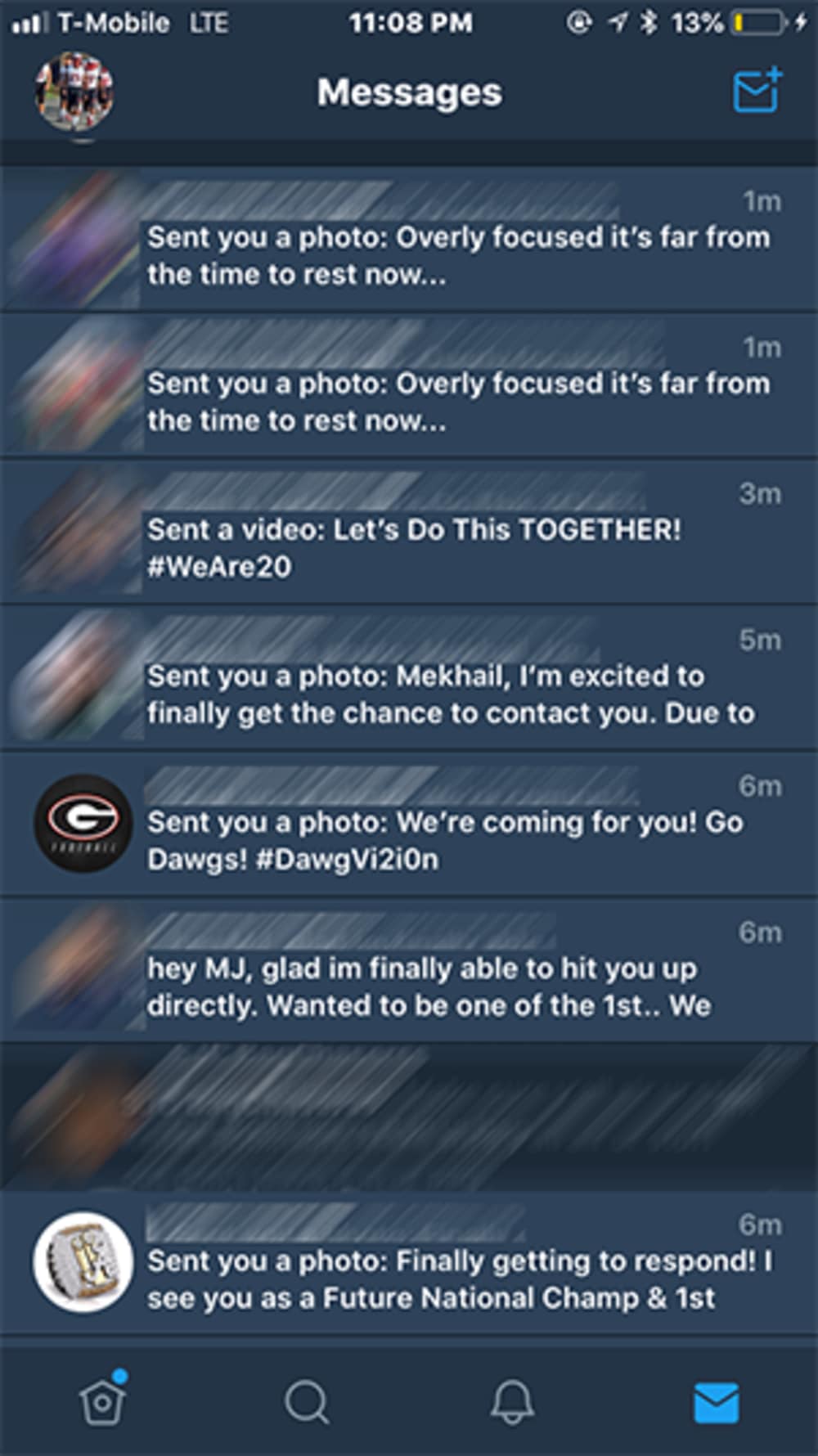 Lettermen Row is not going to go through and show every message sent to Wray and Sherman on Sept. 1. But it’s interesting to see the different approaches taken by schools around the country.

A number of programs sent graphics, aiming to delight the senses. But it’s fair to wonder if that misses the real mark with an elite recruit. For these kids, two Top-100 players being courted by every powerhouse in college football, the idea that a coach wouldn’t take a few seconds to personalize a message could seem like a gamble and a chance to fall behind. For Sherman, though, it didn’t matter.

“I don’t think that deeply on it,” Sherman said. “It is what it is. I am not the only prospect out there. I’m one of the most recruited players in the nation in my class. I’m not tripping over offers any more. I can actually have fun and play ball.”

Wray isn’t stressing over offers either. He’s locked in with the Buckeyes and has not interest in visiting other schools. He sees the push made by schools like Nebraska, for example, as a way of committing to the brand’s development.

“Recruiting is a business and everyone is trying to beat everyone,” Wray said. “So, the spam or personal message, it doesn’t affect me too much. I like to take it as they are building their brand any way they can.”

There are sure to be a lot more messages sent in the direction of these two kids over the next year. But there’s still a thrill with Sept. 1 for any recruit, even if you’ve gotten used to the bright lights of this modern era of recruiting already.

Wray and Sherman? These guy are veterans now, and they’ve got sage-like advice for next year’s crop, the Class of 2021.

“Realize who you are, know that God’s got you,” Sherman said.

Wray’s advice: “Don’t let all the media and ‘love’ get to you. Enjoy playing high school football and don’t choose a school based on how they treat you as a recruit. Choose a school that will build your brand the best it can and give you — as a player and a student — the best opportunity to succeed in life.”

And make sure the phone is fully charged.