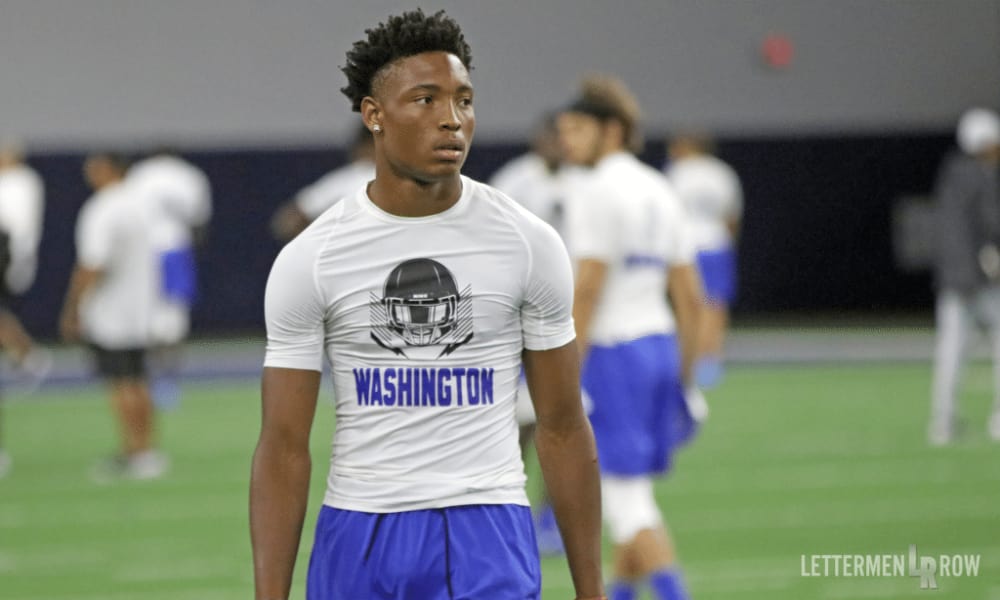 Marcus Washington is the top remaining wide receiver target for Ohio State in the Class of 2019. (Birm/Lettermen Row)

Now down in the Lone Star State for The Opening Finals, the 6-foot-2, 193-pound wideout reflected on the experience and called it “eye-opening.”

“I enjoyed it a lot,” Washington said. “I talked to lot of coaches, hung out with a lot of players and found out a lot about the school itself – the [educational] aspect – but also a lot about the football program.

“Ohio State develops its players the best in the country. From the school aspect, they aren’t the top at any specific measure, but they had a lot of graduates from every major. They have the Real Life Wednesday program, which helps you to get jobs after they leave [school].”

Urban Meyer and wide receivers coach Zach Smith are involved in the recruitment of Washington, the country’s 10th-ranked wide receiver prospect and 62nd-ranked overall player in the Class of 2019. Washington is comfortable with the Buckeyes staff and their approach with him.

“I talked with Coach Smith and Coach Meyer [during the visit], and they kept it real with me,” he said. “They didn’t kiss my butt, and I liked that. They told me they want me a lot, but I’d have to work for it. No spot is given to me. They’re recruiting me to take someone’s spot, but when I get there, they’re going to recruit another person to take my spot, and I liked that a lot.”

Despite being a 100-percent favorite on the 247Sports.com crystal ball predictions, Washington is trying to downplay any reports of the Buckeyes being the odds-on leader in his recruitment.

“I’m still going off my top six [Ohio State, Georgia, Oregon, Missouri, Florida State and Texas],” Washington said. “They’re all recruiting me the same, and I talk to the whole coaching staff everywhere.

“I want to see how they [schools] use me and how much of a priority I am to them. Nothing is given to me, but I want a school to want me and to have a plan for me.”

There was a time recently when Washington was expected to make a decision in early August. But hat may no longer be the case.