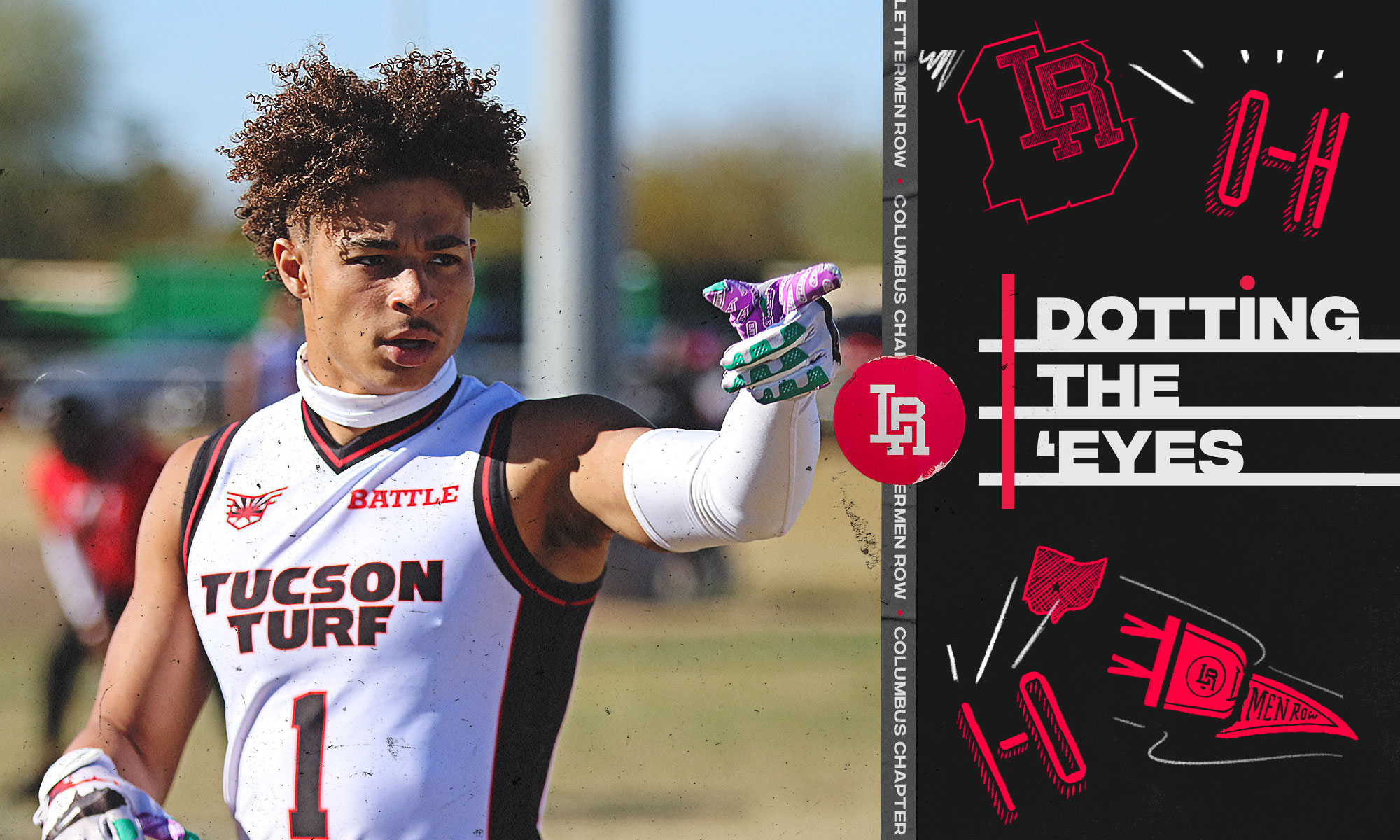 Kyion Grayes has been pointing to his first Ohio State visit for months and it's finally here for the Arizona receiver. (Birm/Lettermen Row)

Stay in touch or be left out because Ohio State recruiting is a 24-hour, seven-day-per-week obsession. What’s the latest news as the Buckeyes build for the future? Get that and more Sunday through Thursday on Lettermen Row. Today we’re looking at the upcoming visit from Kyion Grayes and the Buckeyes first receiver offers in the Class of 2023.

It’s finally here for Kyion Grayes: The long-awaited visit to Columbus that likely will determine the conclusion of his recruitment is just days away. The 6-foot-1, 170-pound receiver from Chandler (Ariz.) High School will head east with his parents on Friday and begin a four-day visit to Central Ohio, something he’s been looking forward to since being offered by Ohio State receivers coach Brian Hartline last October.

“It really is just a good relationship,” Grayes told Lettermen Row while in Arizona on Sunday. “Things just feel like family with the Buckeyes and Coach Hartline, because he keeps it real with me 100 percent of the time — and I want that. This trip is really important because I just want to see the environment there and get a feel for it.

Oregon remains in the conversation for Grayes, and there’s a planned visit to Eugene on the docket for him in the near future as well. However, if things go as well as expected in the next week, it’d not be a huge surprise if that trip never happens.

The Buckeyes have been on a remarkable run when it comes to receivers recruiting, nabbing the No. 2-ranked prospect at the position in 2019 (Garrett Wilson) signing the top-ranked players in 2020 (Julian Fleming) and 2021 (Emeka Egbuka) and owning a commitment from current No. 1-ranked 2022 receiver Caleb Burton.

“I feel really blessed right now,” Inniss told Lettermen Row. “To see the wide receivers that they’ve brought in and to see I’m one of the first one Brian Hartline offered in 2023 is an amazing feeling.”

Ohio State’s tradition and the relationship Inniss has with Keenan Bailey and Brian Hartline make the Buckeyes a real contender down the road for Inniss.

“I view their program as one of the best in the country, if not the best,” he said. “I’ve been waiting on this offer. All my hard work is paying off.”

Inniss told Lettermen Row in January that Hartline promised him he’d be a top choice for the Buckeyes when contact with his class was permitted.

“He told me that basically he will be recruiting me hard after September 1,” Inniss said. “And I’m his guy in my class.”

The offer coming now proves that.

If Inniss is receiver No. 1A for Ohio State in 2023, then Jalen Hale may be in the running as 1B. He picked up an offer from the Buckeyes on Tuesday morning as well.

“I know they don’t offer early, so it was a blessing,” the 6-foot-3, 180-pound Hale told Lettermen Row. “To be one of the first in their 2023 class is amazing. They are an elite program with some of the best wide receivers in the country and a lot of them are going pro. It’s a good program there.”

The Longview (Texas) High School star is the No. 7-ranked receiver in the Class of 2023. Unlike Inniss, who had been in previous contact with the Buckeyes, the offer was his first conversation with Brian Hartline. It went well, and Hale expects further correspondence as permitted.

“[Hartline] seems like he really likes me,” Hale said. “I want to build a relationship with him and get to now him better in my next two years of high school. He has watched a lot of film on me, but today was the first time we talked. He has talked to my trainers, David Robinson and Margin Hooks, and they have talked to me about the interest.”

Hale’s Texas roots aren’t going to necessarily mean that he stays home whenever he makes his college decision.

“I will always look to see what’s the best fit for me,” he said. “A program I can go in and play and feel like it’s home to me.”