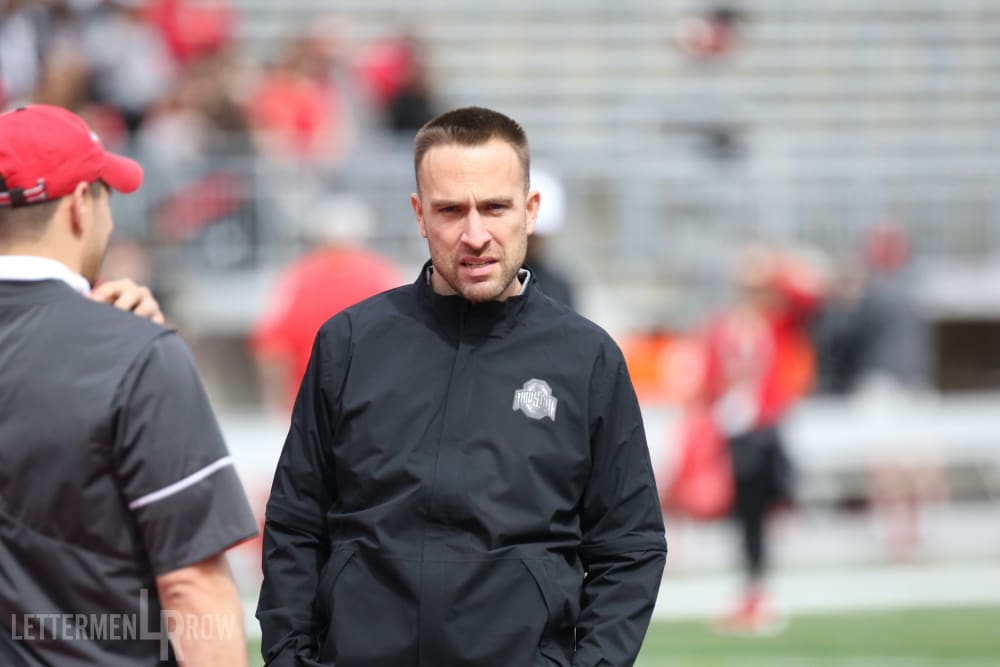 Jeff Hafley has been a dynamic recruiter for Ohio State already. Can he reel in Kourt Williams? (Birm/Lettermen Row)

Have a question about Ohio State recruiting? This is the place for you, five days a week. Submit your questions on Twitter or on the Lettermen Row forums. Check in daily to see what’s on the mind of Buckeyes fans all over the country. Tuesday’s question checks in on the Buckeyes pursuit of California 4-star athlete Kourt Williams.

What’s the latest on Kourt Williams? Is there still high confidence we will land him?

Let me preface this answer by saying that there are many times in the recruiting world when you have to take what sources say with a grain of salt.

After all, we’re dealing with the cream of the crop in their respective profession in most cases, and the world of football isn’t one to enter for a timid, less-than-confident, Type-A personality.

So, what I’m saying is that for the most part everyone at every school professes confidence in their efforts, even if they know in their hearts that they may fall short, whether in recruiting or not. The game of college recruiting is so fickle. Teenagers and their families change their minds regularly. Because of that, it’s an almost daily battle to determine who is feeling good on any given day.

When it comes to Kourt Williams, the 4-star linebacker/safety hybrid athlete from California, his recruitment has seen a couple of schools rise and fall throughout the last few months. Aside from Ohio State, programs like Tennessee, Penn State, Oklahoma and Texas A&M have all received official visits. Each has had a moment or two where things appeared to be heading in its direction.

But things have been pretty darn consistent between the Buckeyes and the 6-foot-1, 218-pound Bullet prospect. That means things have been pretty darn good for months between the visits to other schools and a pair of trips to Columbus. Williams has been prioritized by Ohio State, especially by co-defensive coordinator Jeff Hafley, and he’s reciprocated by staying engaged and interactive with the program.

Kids don’t talk much to a school they’re not that interested in. Since Ohio State offered Williams on his first visit to the school in March, things have progressed very nicely between the two sides. He fits the Bullet position very well and knows that the Buckeyes see him in that role in the future and embraces it, which a lot of times is half the battle for kids who maybe don’t have a true position.

Is there confidence from the Ohio State side of things that Williams will pick it whenever a college choice is made? Yes, I’d say that there is, but that comes and goes depending on exactly who is being asked and what day it is. A week ago, there was a rising sense of optimism from the folks at Texas A&M, now that seems to have dissipated. The same can be said for Penn State a few weeks back.

The Buckeyes have remained a constant, though, and with a decision looming, there’s been nothing to suggest their spot in the pole position for Kourt Williams has been compromised.