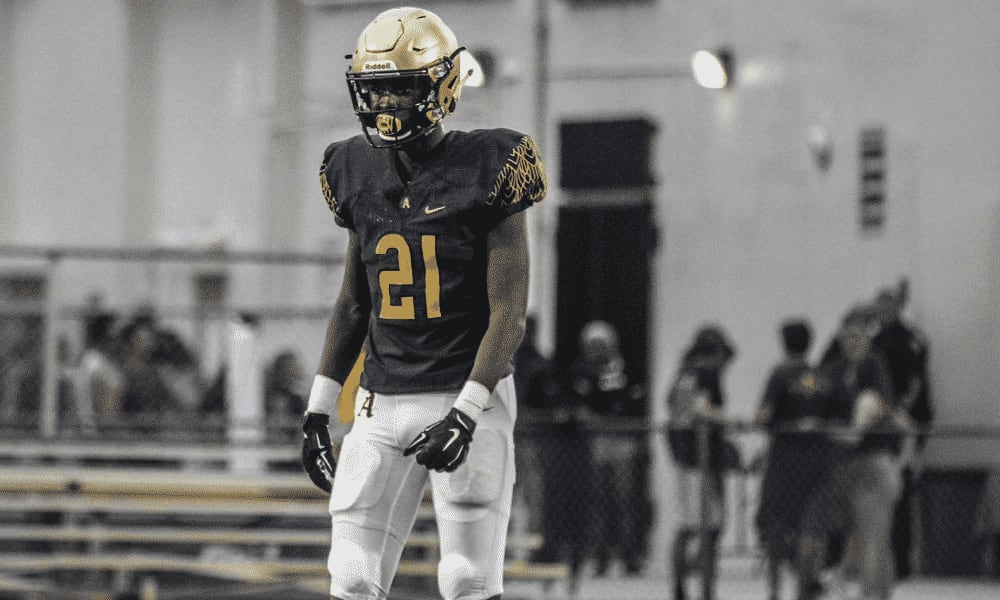 Ohio State continued its historical success at St. Thomas Aquinas in Florida with the commitment of Jordan Battle. (247Sports/Courtesy)

Jordan Battle, a 4-star defensive back,  has committed to the Buckeyes.

Battle, the country’s 12th-ranked safety prospect, is a player that could player anywhere in the Ohio State secondary. It’s that versatility that made him so appealing to programs like Ohio State, Miami, Clemson, Florida State, LSU, Michigan and more than 20 others.

Ultimately, his recruitment came down to Ohio State and Miami, and a lifelong affection for the Scarlet and Gray helped Urban Meyer, Greg Schiano and the Buckeyes staff hold off the hometown Hurricanes.

“Jordan is blessed with size, athleticism, speed, leadership skills, and substantial football acumen,” St. Thomas Aquinas coach Roger Harriott told Lettermen Row. “As a player, he possesses the versatility to play cornerback and safety at an elite level. His eye discipline, hip mobility, football intelligence and physicality separates him from the rest.

“His last name, Battle, fits his attitude and mentality. He is the complete defensive back package. With that said, Jordan’s most impressive trait is the love he expresses for his teammates, coaches and the game. Off the field, Jordan is family oriented and enjoys setting a positive example for others. His best days are yet to come.”

Ohio State’s history of success at St. Thomas Aquinas, one of the country’s most storied prep programs, helped open the door. And Battle was eager to walk through it.

He’ll head to Nike’s The Opening in Dallas this weekend as an Ohio State verbal, and he’s likely to be one of the more vocal members of Ohio State’s growing 2019 recruiting class. He’s the 13th member total and the second to jump on board with the Buckeyes from the group that made official visits last week.

With the addition of 6-foot-1, 187-pound Battle, Ohio State now has three commitments from players expected to start their careers in the defensive backfield, joining Maryland’s Bryson Shaw and New Jersey athlete Ronnie Hickman. Exactly how each lines up, though, remains to be seen.

Battle would seem like a good fit to play corner at Ohio State because of his length and speed – he ran an electronically timed 4.57 in the 40-yard dash at The Opening regional event in Miami.

Stay tuned for more from Lettermen Row and Jordan Battle this weekend.