Friday’s game versus Longview did not turn out how I envisioned it to go.

From start to finish, nothing went right. And it ended as honestly the toughest loss of my high school career thus far. On the first play of the game, I took a hard hit to my shoulder. I tried to get back in the game, but another hit to the shoulder knocked me out of it.  Things rapidly rolled downhill from there.

On Saturday morning, I went to get the shoulder looked at and received X-rays that ruled out a tear or fracture, so I’m definitely feeling relieved. I’ll be back on the field soon.

Every week a standout player is recognized live on-air and presented a personalized bobblehead. I received the news on Saturday morning that I was this week’s player for my game versus Arlington-Martin. The funny thing, though? After Friday’s game, the last thing I wanted to do was accept recognition on live television, but I didn’t have an option.

It was a quick reminder that setbacks will happen, and new opportunities are coming. It was a neat experience and I’m thankful for the high school keepsake. 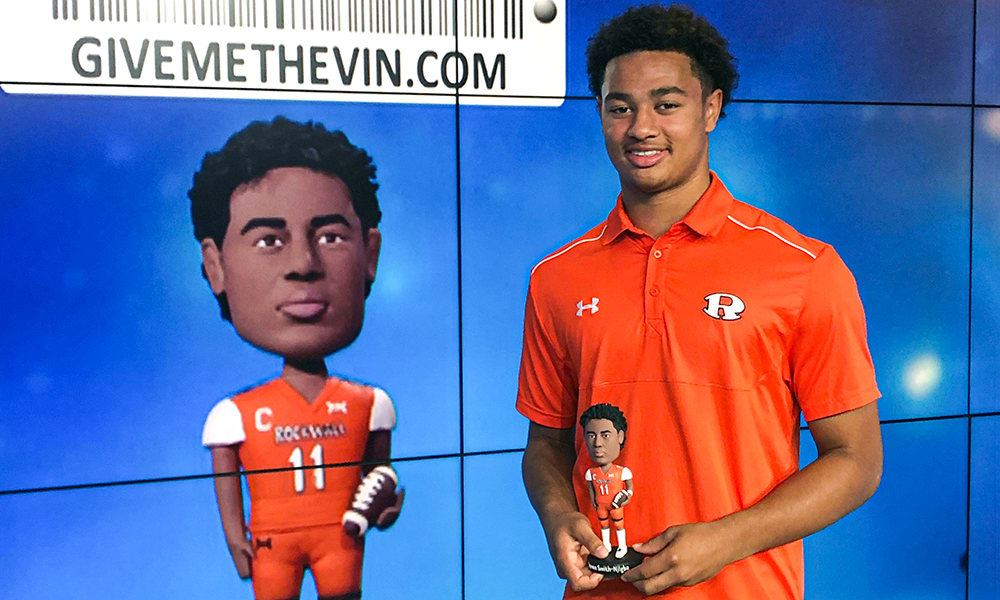 Jaxon Smitjh-Njigba with his personalized bobblehead, an award he received for a huge game against Arlington-Martin High School. (Jaxon Smith-Njgiba/Courtesy)

I’m looking ahead to this week’s game versus Mesquite Horn. My head coach was previously the coach at Horn. I want this win for him and to see our team bounce back after a tough loss.

On Saturday night, I was able to watch Ohio State go into Nebraska — and what a game for the Buckeyes. That was complete domination, and I’m happy for those guys. To go out there and put on a show in that fashion in front of that packed house? That was awesome.

I’m hoping that the Buckeyes will put on another show this weekend, because it has worked out for most of the 2020 commitments — especially the wide receivers — to make it to Columbus this weekend for the game against Michigan State. Gee Scott, Julian Fleming and I will be there Saturday. Mookie Cooper has homecoming, so he can’t make it. I wish he could make it with us, but I hope he has as much fun at his homecoming as I did at mine. I’m super excited to hang out with those guys and the rest of the commits, and you know we’re going to be trying to recruit some of the guys visiting for the game.

Michigan State is actually my late grandfather’s alma mater. He graduated with his Master’s degree from there in 1979 after immigrating from Sierra Leone. He knew nothing of American sports then, but he quickly learned Magic Johnson was good at a game called basketball. Ironically, my dad was born in East Lansing. Despite State-Up-North roots, I know my grandfather would be very proud of my decision to become a Buckeye.

The remainder of this week, I’ll be aggressively rehabbing and keeping my focus on a return as quick as possible.

See you in Columbus Saturday. If you see me on the field, say hello. O-H!