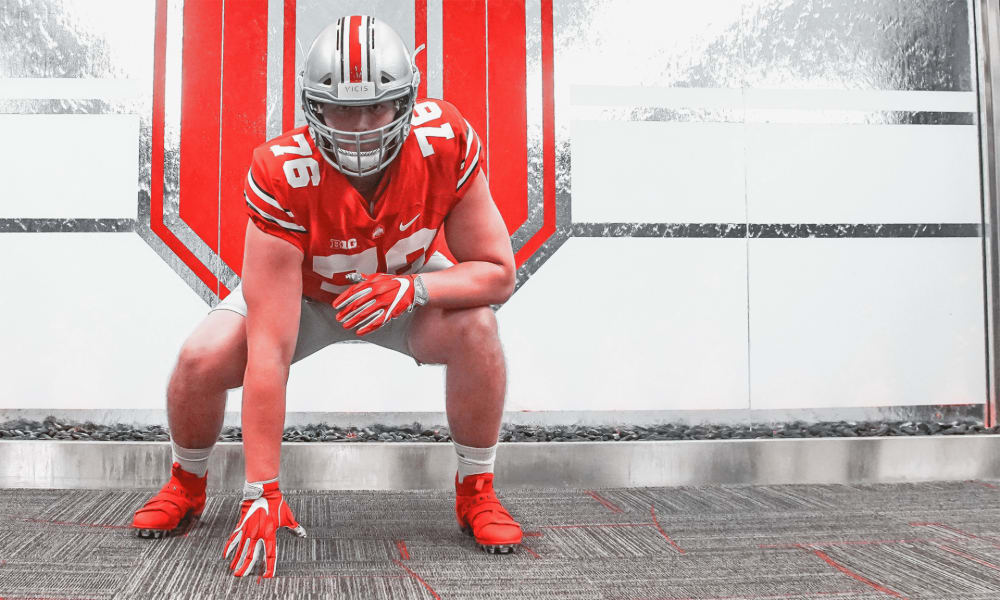 When Buford (Ga.) 4-star offensive lineman Harry Miller committed to Ohio State (publicly) on Sunday, it was the culmination of a year-long, high-energy recruitment by the Buckeyes.

Miller, the country’s No. 2-ranked center, was priority No. 1 for Urban Meyer and his offensive staff. And whether it’s from the perspective of his coach in high school or one of the most decorated offensive linemen in Ohio State history, it was easy to see why.

The nation’s best center last year breaks it down

A high school head coach will usually tell it like it is, and Buford coach John Ford certainly raves about his 6-foot-4, 310-pound star. But he’s certainly not the only one impressed by Miller, and that group prominently includes Billy Price.

The former Ohio State All-American, 2017 Rimington Award winner and 2018 first-round pick by the Cincinnati Bengals met Miller during his recruitment. Price has seen Miller’s tape and taken the time to break down what he sees from the future Ohio State lineman.

“The first thing that pops out when you watch the highlight tape is his on field energy,” Price told Lettermen Row. “Every play he’s driving and finishing guys. He plays with a swag you don’t see most offensive linemen play with. Harry is lower-body driven and you can see it with his legs churning on every play.”

Price, who was initially recruited by the Buckeyes as a defensive tackle, sees a little similarity between his own talents and Miller’s.

“One thing I like best about Harry personally is his versatility,” the new Bengals center said. “There are snaps of him on offense playing tackle, guard and center as well as playing defensive line.”

Though he’s ranked as the country’s No. 36 overall prospect by the 247Sports.com composite rankings, there is – of course – room for improvement with Miller, according to the two-time All-American.

“One improvement that I see must happen is better use of hands when in pass protection,” Price said. “He’s a really solid run blocker, but he must match it in the pass protection. Defensive linemen in college are far more advanced than those in high school, but he should adapt just fine once he gets to Ohio State with Coach Stud.”

As noted, Price has met with Miller and was able to get a good sense of his mental makeup. The right attitude is perhaps the most important attribute to possess in order to succeed at Ohio State, something Price can relate to directly. Price remembers that at one point he wanted to quit because things were so tough, but he thinks Miller is prepared for what’s ahead.

“I personally sat with Harry and his parents during his official visit (in April) and explained to him the significance that this university has, especially playing offensive line,” Price added. “Harry will continue to add to the lineage of excellence at Ohio State and I’m proud to say he’s going to be one of us.

“All he has to do is go to work. Be the guy who isn’t afraid of adversity and be comfortable being uncomfortable. [Ohio State strength coach] Mick [Marotti] and staff will get his mind and body right for college ball. Ohio State fans will love him.”

Through the eyes of his coach

“As a player, his ceiling is a first-round NFL draft pick,” Ford told Lettermen Row.  “[Miller] has strength, flexibility, technique and an overall commitment to excellence.”

There’s a lot more to Miller than his on-field talent, which is a major reason why he was such an important targets for the Buckeyes and the almost 30 other schools that offered him a scholarship. Ohio State, a Georgia source shared the day of his commitment, “connected with him on a spiritual level,” and that is something that Miller won’t overlook.

“His mom is an incredible person,” Ford said. “She’s done a fabulous job raising him, and his faith in God is genuine and real.

“I saw Ohio State just do a comprehensive job recruiting him. They left no stone unturned. From Ryan Day to Greg Studrawa to Urban Meyer, they covered every base. It was impressive.”

Class Warfare: Plenty of intrigue as Ohio State searches for 2019 tight end
With Harry Miller committed, who could be next for the Buckeyes 2019 recruiting class?