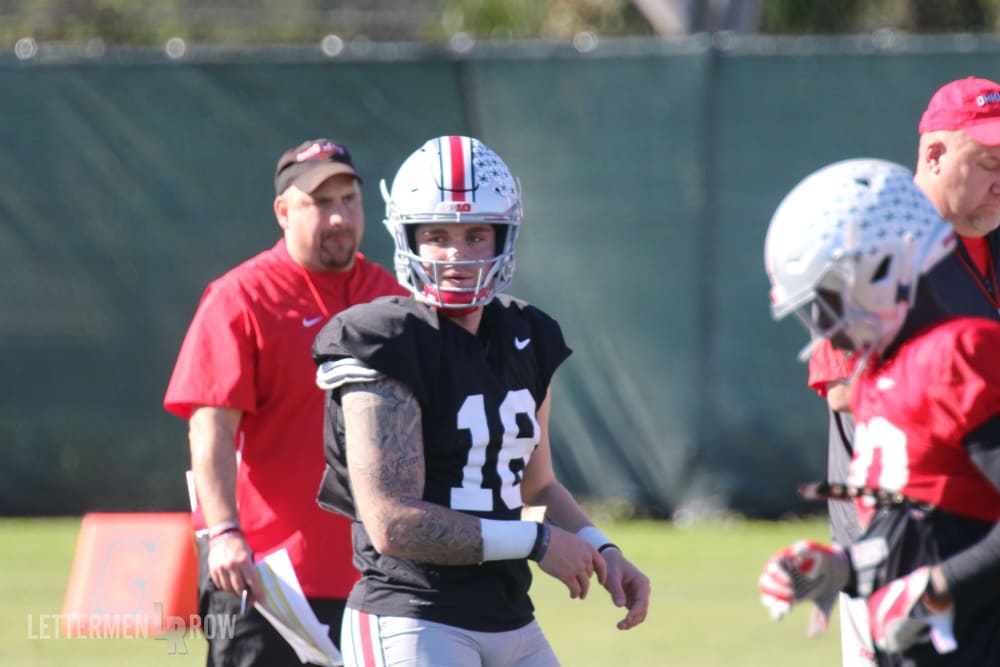 Stay in touch or be left out because Ohio State recruiting is a 24-hour, seven-day-per-week obsession. What’s the latest news as the Buckeyes build for the future? Get that and more Sunday through Thursday on Lettermen Row, including today’s thoughts on the Buckeyes need for a quarterback and a new 2019 receiver target is emerging.

Tate Martell had a lot to say on Sunday at the Rose Bowl’s media day. Outside of his views on where the quarterback competition goes next spring, Martell dished on exactly why the Buckeyes are so fervently searching for another passer following the surprising loss of Dwan Mathis to Georgia on Signing Day.

“Whoever is going to come in, we’re going to need to grab somebody regardless,” Martell said. “I mean, right now it’s me, Matthew Baldwin and [Chris Chugunov] — who knows how the quarterback room is going to play out, but you have to have four quarterbacks as it is. Somebody has to come in.”

The most obvious pick to fill that spot right now is Justin Fields. The belief by many is that if Fields does choose Ohio State, he’ll be handed the keys to the offense — and that’s what led to Martell’s candid interview on Sunday morning. The redshirt freshman quarterback wants people to understand it’s not that easy to just stroll into a place like Ohio State and win a job. 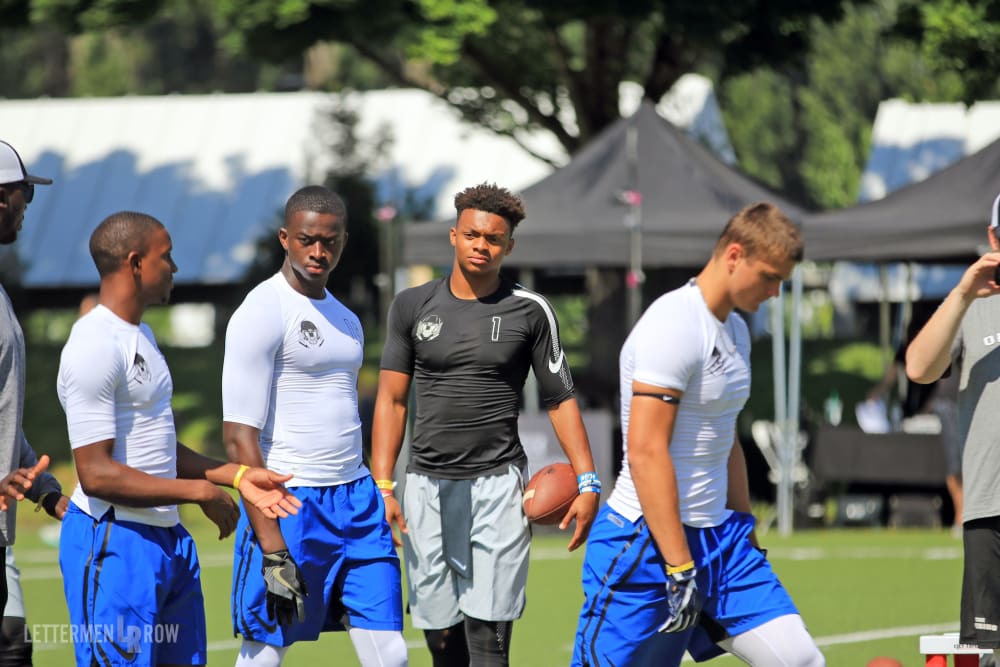 Tate Martell doesn’t believe Justin Fields is guaranteed to start at Ohio State if he transfers to the Buckeyes. (Birm/Lettermen Row)

“It’s going to take a while to learn the offense. I’m just telling you, it’s not easy,” Martell said. “It doesn’t matter where you came from or what you’ve done. Coach [Ryan] Day brings an NFL-type of playbook to our offense, and it’s difficult. It’s not going to be something that you can just walk in and three months in during spring ball you think you’re rolling.

Who is George Pickens? Is there real interest from Ohio State?

Ohio State signed two big-time prospects in the Class of 2019 at the receiver in Garrett Wilson and Jameson Williams. There has been no plan to recruit another receiver in this year’s cycle, but reports are now connecting the Buckeyes to Auburn commit George Pickens, a 4-star receiver at Hoover (Ala.) and a top-40 player nationally. Pickens has been committed to the Tigers since July of 2017 but is now beginning to set up visits around the SEC.

His check-in photo at the Under-Armour All-American is, in a word, bizarre.

Five-star WR George Pickens drew a lot of attention at #UAALLAMERICA game check-in today. The #Auburn commit always has a lot of bracelets on. No #WDE bracelet today, but #UGA and #LSU had spots on his wrists. He's visited LSU officially, the #Dawgs will get one in January. pic.twitter.com/nCoRyzy087

The 6-foot-4, 190-pound Pickens has already taken an official visit to LSU. Yes, he’s heard from the Buckeyes as recently as Friday. There are not yet any concrete plans for a visit, but the Buckeyes are interested in getting to know Pickens and would welcome him in for a January visit if he wants to do it.

Stay tuned here, because it could get interesting. But the odds of landing a receiver from Alabama still aren’t super high for the Buckeyes.

Ohio State cornerbacks coach Taver Johnson is almost done with his first season back in Columbus, and the two-time assistant talked with Lettermen Row on Sunday about how recruiting has changed since his last go-round under Jim Tressel.

“It’s been great being back,” Johnson said. “Anytime you get a chance to come back to Ohio State, being from Ohio — like Lebron says, just a young guy growing up — it’s been special for me and my family. Coming back this time, there’s been a lot of similarities. Expectations are always there. Buckeye Nation is always behind you and you’ve always got the Best Damn Band in the Land. You know, you always have the opportunity to coach great players and more importantly be around great players.”

The way recruiting was under Jim Tressel’s program was much different, though.

“Recruiting has changed dramatically within the last five years, let alone eight,” he said. “Having the personnel and more people to help coaches with recruiting has been the biggest difference. Before, we had a recruiting department and coaches were involved. but again, it’s just changed because everything has really sped up in terms of offers with young guys, the official visits happening in the spring — you really have to get a jump on things quicker than you did in the past. I think that’s what [Mark] Pantoni and his guys have done a great job with.” 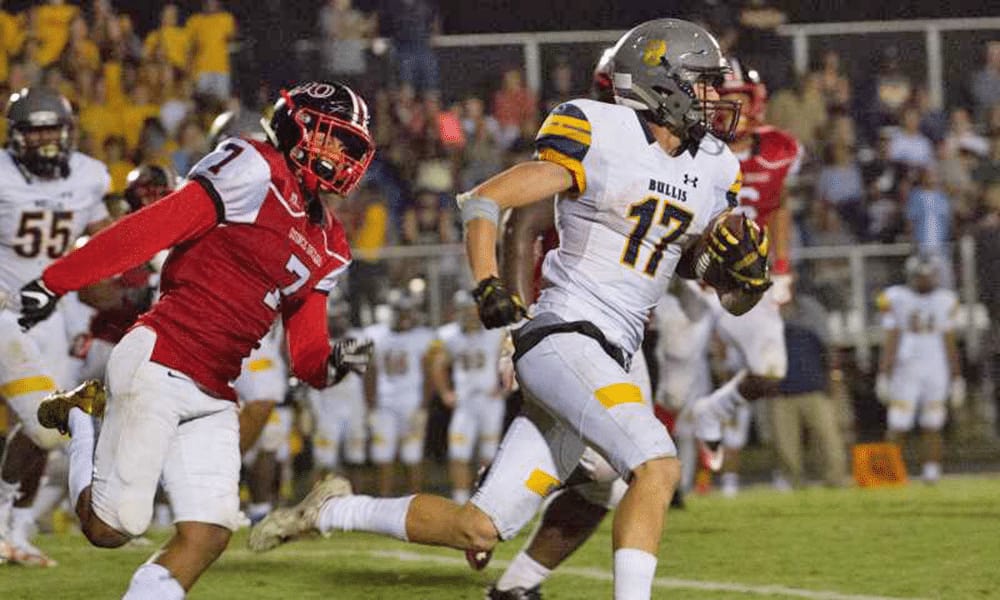 Bryson Shaw is a player Taver Johnson is excited for at Ohio State. (Bryson Shaw/Twitter)

Two of the Buckeyes 15 early signees and both Bryson Shaw and Ronnie Hickman fit the bill when it comes to what Ohio State is looking for in a defensive back.

“We love tall corners for sure,” Johnson said. “Those guys have to cover tall receivers. Speed, toughness — toughness is definitely the key — mental and physical. A guy that can go day-to-day, fight through anything, put his face in there on blockers, make tackles and be willing to tackle, toughness is huge for us, huge, along with all those other traits.”

It sounds like Shaw could be a candidate to start his college career as a cornerback while Hickman is likely a safety when he arrives at Ohio State next week.

“Explosiveness,” Johnson said. “Those guys can really, really run and they have really good ball skills and will hit you. That’s what you want to see from guys in the secondary, guys who possess those kinds of things.

“[Bryson Shaw] is so fast. That’s the biggest draw we had to him because again, he’s so fast. That’s obviously a prerequisite to play corner is to be able to run, and to get started from Point A to Point B at the drop of a dime.”

On Saturday, Ohio State commit Jack Miller visited LSU at its bowl game practice in Phoenix. The Tigers are one of the teams that finished close to the Buckeyes when the 2020 4-star quarterback picked Ohio State last June.

That visit, combined with speculation that Miller is nervous about the potential addition of Justin Fields, may have sparked some concerns. But his father indicated there’s no reason for that.

“I still need to run the Princess Headquarters,” Jack Miller Sr. told Lettermen Row. “It’s the hotel for one of the Fiesta Bowl teams. LSU is at my hotel, that is it.

“His friends, some big-time receivers and defensive backs came in from Tucson, California and Phoenix. Jack was seeing those friends, including lineman Cade Bennett, and Jack was recruiting for his team. It’s the Fiesta Bowl and he doesn’t play games. We have been clear and we expect and get the same loyalty in return from Ohio State.”

In today’s recruiting climate, any visit made anywhere with any team gets attention, and both the Millers know that. But the future Buckeyes quarterback is doing his best to avoid all that according to his dad.

“He doesn’t care about the noise,” Miller said. “It can be intense, yes. And we learned a lot on the recruiting trail, we saw a lot and heard a lot. Some good and some not so good. One day it will be a good book.”

Until it publishes, there’s still no reason to worry about Jack Miller in the meantime.