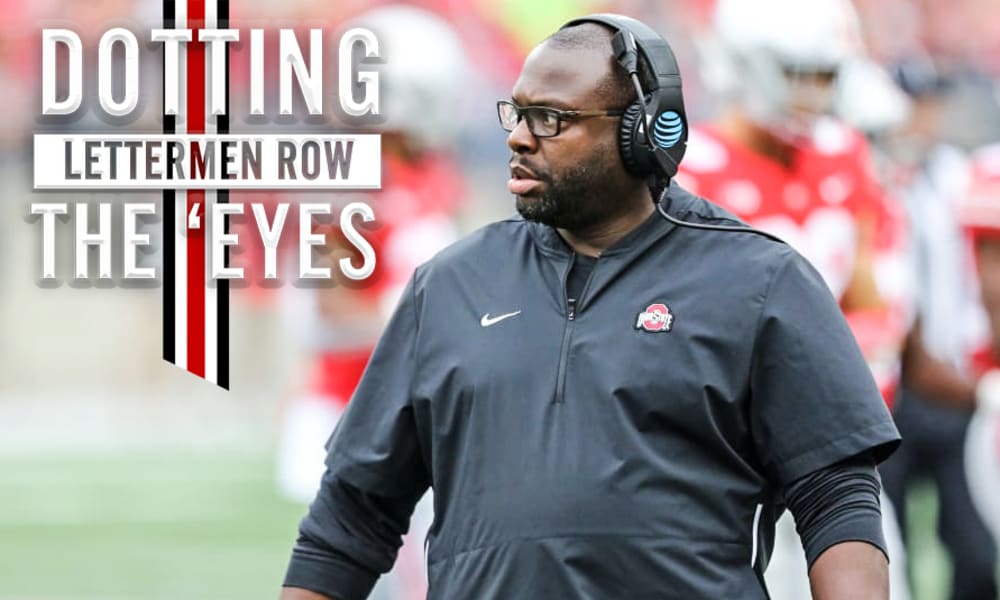 Tony Alford may need to start over with running back recruiting in 2020 after surprising weekend events. (Birm/Lettermen Row)

Stay in touch or be left out because Ohio State recruiting is a 24-hour, seven-day-per-week obsession. What’s the latest news as the Buckeyes build for the future? Get that and more Sunday through Thursday on Lettermen Row. Today’s notebook has more thoughts on the Buckeyes running back situation, an update on a recent Georgia visitor and more.

It’s time to take a step back from the ledge.

After one of Ohio State’s most successful recruiting runs in recent memory, there was a spell of bad news that hit the program this weekend when things changed dramatically in the running back recruiting efforts.

It was, in a word, unsettling. It was unexpected. It was shocking.

It was not something that Ohio State could have prevented.

At different points in the last month, Bijan Robinson and Jaylan Knighton had both given very strong indications to the Buckeyes that they were heading to Columbus for college. Both players chose to do that during a recruiting dead period following their only visits — both of them official — to Ohio State.

There was no indicator that things were heading awry, even as recently as last Friday. Then Knighton decided to visit Florida State because one key member of his family wanted him to, and things got murky. Saturday, Robinson informed Ohio State that his mind had changed for unspecific reasons.

Tony Alford didn’t forget how to recruit. Ohio State didn’t do anything wrong to lose its position in these recruitments. On the recruiting trail, it’s a fight against every school in the country along with a host of variables seen and unseen. The Ohio State program is one of the few big enough and respected enough to combat nearly every threat and win the majority of the time.

But families that are divided aren’t easy to overcome. When asking a young man to leave his family and go to school 1,000 or 2,000 miles away from home, there can be no doubt or division inside the family unit. If there is, no matter what the player himself wants to do, that’s probably a losing battle.

The beat has to go on for the Buckeyes. This is where Urban Meyer excelled and where Ryan Day and his staff will face their next challenge, because when Meyer lost a recruit, he almost always found a way to replace him with someone that fit the program even better.

An early candidate for the best name of the 2021 recruiting cycle, Hassan “Chief” Borders visited Ohio State over the weekend.

A 6-foot-3, 211-pound linebacker from McEachern High School in Powder Springs (Ga.), Borders stopped in Columbus following a trip to Purdue and Illinois. A Chicago native, Borders moved to Georgia when he was a young child and was eager to make a visit to see the Buckeyes as a recruit.

He was not disappointed.

“The best part was just to see Ohio State,” Borders told Lettermen Row. “I got to chop it up with [linebackers coach] Al Washington and Greg Mattison. Just seeing how I fit into the defense.

“Coach Washington has seen me in action, and he sees an athlete that can do it all. I can cover or rush the passer, and he thinks I can be leader on the field from the linebacker position.”

Borders has 22 early offers, but he does not yet have one from Ohio State. He’s hoping that happens in the near future.

“I will be on the phone with the head coach soon,” he said. “I have to call them on Monday. Ohio State has all the things I’m looking for a college to have. I want to be a pediatrician, and they have a medical center for Pre-Med students and the education there is big for me.

“And, of course, Ohio State is known for winning football and the brotherhood.”

WOW!!! After a great conversation with @CoachJeffHafley I am EXTREMELY blessed to receive a scholarship offer from the prestigious school
“THE” OHIO STATE UNIVERSITY⭕️‼️ pic.twitter.com/vYKzgOlg0m

Washington is the country’s 20th-ranked cornerback and a 4-star prospect according to 247Sports.com. He visited Ohio State in June and left that visit impressed by what he saw in Columbus.

“[The trip] was really good,” he told Lettermen Row. “It was something different compared to all the schools I’ve been to.

“I like how they have their Real Life Wednesday program and what they do for the players to get them at a high level. There was nothing I saw there that I could say I didn’t like.”

After rough weekend, where do Buckeyes turn now at running back?
Buckeyes still waiting for linebacker Reid Carrico to commit
Advertisement
Advertisement