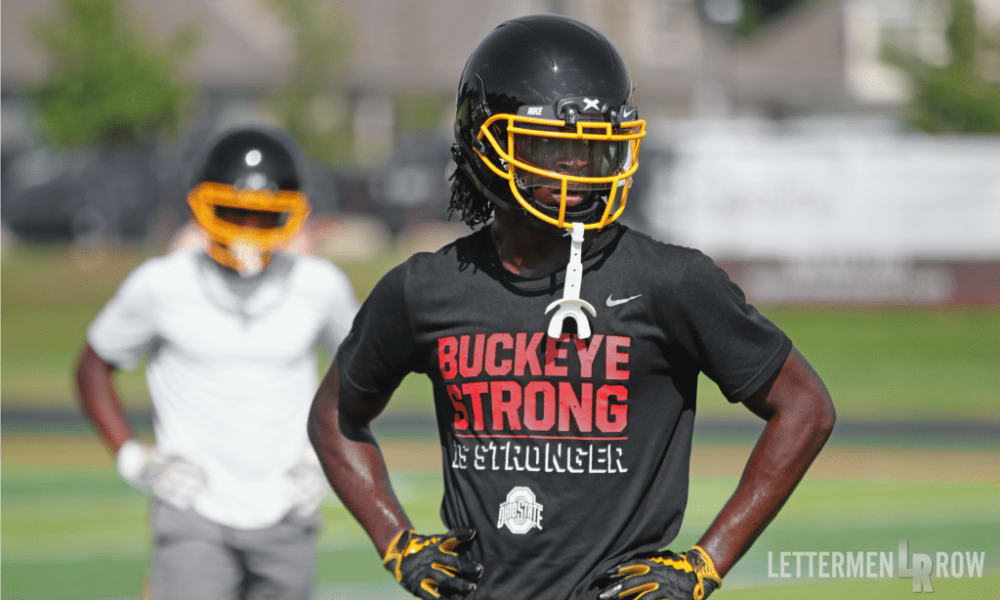 Ohio State is the stated leader right now for Detroit Martin Luther King 2020 wide receiver Rashawn Williams. The country’s 21st-ranked wideout has been to Columbus only once, and he’s laid pretty low on the recruiting front all summer long. But there’s a reason for that.

The 4-star prospect will visit Ohio State on July 27, a trip that’s important for him as he looks to get more familiar with the program.

“This trip is just about trying to get a feel for their offense,” Williams said. “Plus, it’s a chance to build relationships with the 2020 recruits.”

The Buckeyes will host a dozen or so top prospects in that class next weekend. Williams says he is 100 percent going to be in Columbus, whether it be with his mother or a coach.

There is plenty of time for Michigan, Michigan State and others to get in the mix for Williams. But if the Buckeyes were to press and really make him a priority, they could find themselves with a big lead for a big-time talent from The Mitten.

We’ve talked all week long about some of the names that could end up joining Jake Wray, Paris Johnson and Luke Wypler on the Ohio State offensive line in the future. Today, we’re going to introduce to you another candidate to eventually that join that group: Monroe Mills from Columbia, Mo.

The 6-foot-7, 280-pound tackle at Father Tolton High School visited Ohio State in June and caught the attention of the coaching staff during a one-day camp visit on June 16.

“It was a fun, but hot, camp,” Mills told Lettermen Row. “[Ohio State defensive assistant Peter] Badovinac pulled me out of the regular campers to work with the serious recruits, and I got to spend the day with [offensive line] Coach [Greg] Studrawa in his group.

“It was a real surprise and honor to be invited into Urban Meyer’s office with Coach Studrawa. They told me they liked what they saw and that I had potential and should consider Ohio State.”

You are likely not surprised that a player whose only other offer is from Dartmouth would doing just that. The trip to Ohio State was one of a handful of stops Mills made this summer, including Notre Dame, Kentucky, Duke, North Carolina, Ole Miss and others. The decision to camp in Columbus was made for a simple reason: The football program is one of the best in the country and is at a top-notch school as well.

“Ohio State is every football player’s dream,” he said. “Coach Badovinac has been following me since my freshman year and staying in touch with me through my high school coach. He encouraged me to make the trip after he watched me at a combine at Lindenwood High School.

“My dad was with me, and we saw some of campus and Columbus the evening before. The high-level academics at Ohio State is a big deal for us, and of course the football facilities tour was fantastic.”

The currently unranked offensive tackle has a visit scheduled to Minnesota for the end of July, and he hopes to return to see the Buckeyes play this fall.

There’s a good chance that we’ve all been spending so much time focusing on West Virginia’s Brenton Strange as the Buckeyes eventual tight end signee in the Class of 2019 that we’ve not paid nearly enough attention to Memphis (Tenn.) Whitehaven High School’s Cormontae Hamilton.

Hamilton was offered by the Buckeyes following a trip he made to Columbus for Friday Night Lights on June 22. He’s not your typical tight end, checking in at just 6-foot-2 and 252-pounds, but Ohio State couldn’t help but offer him after a performance that showed true football toughness. But beyond that? He has an incredible desire to be in Columbus.

He actually rode a bus 12 hours from Memphis to get to Ohio State for that camp.

“One reason they offered me was that I showed that I wanted it,” he said. “I came up there on a Greyhound just to be there and camp. I went there with a sprung AC joint in my right shoulder and didn’t give up not one bit. I gave it my all.”

If you know the Ohio State coaching staff at all, you know that they value competitive spirit over any other trait a player may have. Hamilton, the country’s 36th-ranked tight end, has that in spades. The visit with the Buckeyes in June was his second in three months following visit to Columbus in April for the spring game.

The $289 spent to get back to campus in June was just to make good on his promise to tight ends coach Kevin Wilson.

“After the spring game I told Coach Wilson I’d be back up there,” he said. “After I hurt my shoulder I was questioning whether to make the trip, but I made a determination that if this what I want, I have to go get it. I wanted it bad. I liked Ohio State when I first went up there, the football, the school, everything. It’s a program for student-athletes.”

Now, the question is exactly how much does Hamilton want to be a Buckeye? A decision is likely to happen before his senior season starts. Alabama, Louisville, Ole Miss, Tennessee and Virginia Tech are all involved in his recruitment as well. My 247Sports.com crystal ball is on Ohio State.

Which 2019 Ohio State commitment has ‘diamond in the rough’ potential?
Scarlet Sunrise: Which underrated Ohio State recruit could star for the Buckeyes?
Advertisement