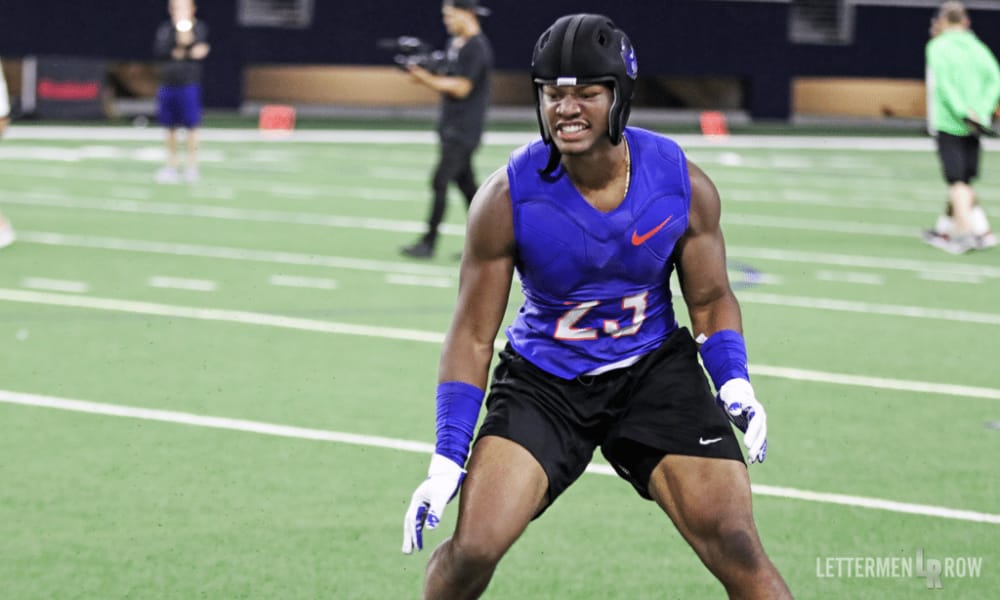 Stay in touch or be left out because Ohio State recruiting is a 24-hour, seven-day-per-week obsession. What’s the latest news as the Buckeyes build for the future? Get that and more Sunday through Thursday on Lettermen Row, including today’s updates on the Buckeyes recruiting efforts with a handful of top 2020 targets.

After a rash of early commitments from some of the top players in the Class of 2020, Wednesday saw a couple major prospects make the decision not to decide.

5-star linebacker Mekhail Sherman, a top priority for the Buckeyes from St. John’s College High School (Washington D.C.) was the first to take to Twitter with his new plans.

Commitment will be made on National Signing Day in February 2020, no longer in the summer…

Sherman announced Dec. 3 that he was expecting to make a college choice between seven finalists that included Ohio State, Alabama, Penn State, Georgia, Michigan, LSU and Clemson. There’s no word on whether or not his finalists will change. But it’s clear his timeline has, and he explained why to Lettermen Row.

“There are a lot of coaches moving around,” Sherman said Wednesday night. “And I still need to make visits to certain schools.”

Ohio State has been near the top of the list for the 6-foot-3, 235-pound Sherman, and it remains to be seen how the departure of Urban Meyer will impact his thoughts on the program. But it seems to have affected his recruitment overall.

California 5-star running back Kendall Milton also announced on Wednesday that he was abandoning the idea of a midsummer commitment and instead will choose his college next December in the early signing period.

For those asking , it will most likely happen during the early signing period of next year. https://t.co/zkeXtb1fF1

Whether or not the 6-foot-2, 210-pound Milton conversed about his decision with Sherman isn’t known, but his sentiments echoed Sherman’s. The country’s 11th-ranked prospect in the Class of 2020 just can’t make a decision anytime soon with so much uncertainty around the programs he’s interested in joining.

“There’s a lot coaching situations changing right now, college football is a trip,” Milton told Lettermen Row. “There’s the USC running back coach situation and Urban Meyer stepping down. I want to see how teams adjust and see how the relationship goes with new coaches.”

Milton also wants to ensure the official visits he makes will happen when there’s football being played, since it’s important for him to take “officials to games.” He’s not yet heard from new Buckeyes coach Ryan Day.

On Wednesday, we wrote a little bit about the big announcement that was expected by 5-star receiver Rakim Jarrett, a teammate of the aforementioned Mekhail Sherman.

“What news is coming? That’s the debate. No one seems to know, and multiple sources I’ve spoken with on the Ohio State side of things do not believe a decision is pending — and neither do East Coast folks close to Jarrett and neither do people close to LSU.”

It was not a commitment, but perhaps a decision that could help bring a commitment closer for the Washington D.C. star. The 6-foot, 180-pound Jarrett updated his final schools and now sits at six programs he’s still considering.

Ohio State is the lone Big Ten school to make the final six for Jarrett, meaning two of the schools most people expected to make the cut — Maryland and Penn State — did not. Jarrett’s mother is from Canton, and she’s really hit it off with another  Canton native in Brian Hartline. But to this point she has not made a visit to Ohio State’s campus, and that will be a major factor in the timing of his eventual announcement.

After earning the title of Gatorade Player of the Year in Florida weeks ago, Ohio State signee Marcus Crowley was named first-team All-Florida by the folks at USATodayHSS.com. Crowley was first team at running back alongside Alabama commit Trey Sanders, one of two players from Jacksonville’s Trinity Christian Academy to earn that honor. Defensive back Fred Davis II, a 5-star 2020 prospect, was also named first team.

A handful of other Ohio State commits and signees were also tabbed as all-state selections in their home states.