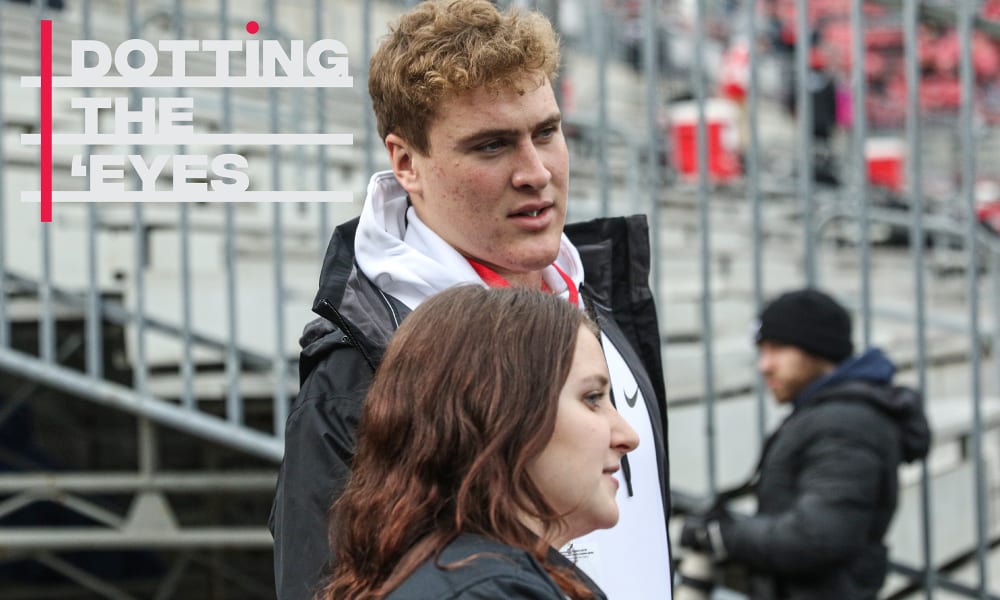 Kentucky lineman Jager Burton is a top target for Ohio State in the Class of 2021. (Birm/Lettermen Row)

Stay in touch or be left out because Ohio State recruiting is a 24-hour, seven-day-per-week obsession. What’s the latest news as the Buckeyes build for the future? Get that and more Sunday through Thursday on Lettermen Row. Tuesday’s notebook plays catchup on a pair of recent updates from junior prospects and has the latest on the Buckeyes pursuit of Temple graduate transfer Quincy Roche.

Over the last week or so, a number of Ohio State targets made small announcements about their recruitments. Most of them are inconsequential in the big picture of things. But there’s no doubt that the Buckeyes are very serious about Lexington (Ky.) Frederick Douglass offensive lineman Jager Burton, so he’s worth mentioning here.

Now, the question of what makes a top-school list official versus unofficial is worth asking. But either way, when it comes to Burton, Ohio State is going to be on the list.

The Buckeyes are one of three programs that Burton knows will receive an official visit, along with Penn State and Oregon. But there are no dates set for anything of that nature yet. Buckeyes offensive line coach Greg Studrawa and Ryan Day have been very involved in the recruitment of Burton for months, and he’s begun building a solid relationship with 2021 commitment Ben Christman and a host of offensive line targets who visited campus in late November when Burton did.

There’s a lot of time left for other schools to make hay in the recruitment of Jager Burton, but the Buckeyes are in a very good position heading into the next few months. A decision timeline hasn’t been specified. But when the official visits begin, it’s wise to expect a decision shortly thereafter.

As consistent as Ohio State has been in recruiting Jager Burton, that has not been the case with Seffner (Fla.) Armwood 2021 athlete Charles Montgomery.

The country’s No. 22-ranked athlete visited the Buckeyes in November, and he has been high on them for months, citing his relationship with running backs coach Tony Alford as a primary reason for it. Montgomery announced his top-five schools on Christmas Day.

Montgomery added a Georgia offer on Tuesday morning, but those listed schools are the ones he likes the most. He admits, though, that communication has been sparse in recent weeks with most of them.

“My recruitment is open,” Montgomery told Lettermen Row. “But I’m still committing in May. I honestly don’t know who I’d pick because lately, no one is communicating.”

That is the ebb and flow of recruiting for a player who has more than a year left before he can sign a Letter of Intent. Programs around the country are focused on finishing out the 2020 cycle, and position-less players like the 5-foot-10, 185-pound Montgomery can be put on the proverbial backburner.

Ohio State is primarily recruiting Montgomery as a running back to this point. But with targets like Donovan Edwards, Camar Wheaton, Evan Pryor, Will Shipley, Lovesea Carroll and Corey Kiner among others still in the fold, it’s unclear where Montgomery would fall on the list of priorities if he’s committed to a spring-time decision.

Is there room at Ohio State to add Quincy Roche?

The Buckeyes are being mentioned as a potential landing spot for Temple graduate transfer Quincy Roche, and he’s most certainly an intriguing prospect to consider as an additional defensive end in 2020.

But, according to one Ohio State source with direct knowledge of the numbers game, a consideration is all the Roche recruitment is likely to be for the Buckeyes.

That seems to line up with a cursory glance at the roster. Roche is a defensive end, and the Buckeyes aren’t exactly hurting at that position. Jonathon Cooper, Tyreke Smith, Tyler Friday, Zach Harrison, Javontae Jean-Baptiste, Noah Potter and Cade Stover are all expected to be in the rotation heading into the 2020 season. So, it’s hard to see Ohio State holding back any of those players for a one-year rental.

If the Buckeyes are going to use the transfer portal in 2020. it seems the two most likely spots right now would be at defensive back or running back. The latter is still a long shot right now, but that could change if there are any lingering doubts about the health of Marcus Crowley heading into spring football and beyond.