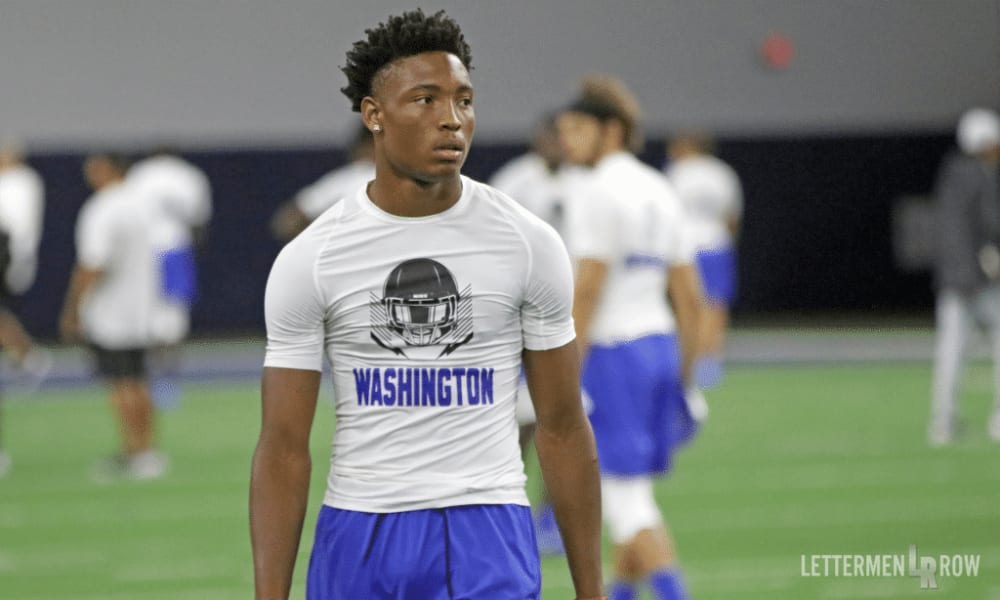 Wide receivers like Marcus Washington are a huge priority for Ohio State in 2019. (Birm/Lettermen Row)

The Tuesday recruiting question of the day tackled a very important subject: Which is the biggest position of need for Ohio State’s 2019 class? Lettermen Row recruiting czar Birm pointed out that while defensive line is home to the biggest must-get recruit in years – local 5-star defensive end Zach Harrison — wide receiver will have quite a few holes to fill in the future.

Here’s part of what Birm had to say about why it will be crucial for Ohio State to land some talented wide receivers in the current recruiting cycle:

They’ve done a great job getting that endeavor started with Garrett Wilson. I believe he’ll be a future captain in Columbus. The Buckeyes are in great shape with both Marcus Washington and Jameson Williams as their recruitments enter the home stretch. They could land a player like Elijah Higgins — another guy that I believe will be a college captain one day — and really round out the room. Or they could take a shot at a big-time, star-in-the-making like Kyle Ford.

In a relatively weak overall group of 2019, the wide receiver position is certainly the deepest and provides Ohio State an excellent shot to restock its soon-to-be-bare cupboard. That’s why I think this year, right now, that’s the biggest position of need for the Buckeyes on the recruiting trail.

Speaking of wide receivers, Ohio State could land a good one next month. As Birm mentioned, the Buckeyes are in good shape with Marcus Washington. That’s good news for Buckeye fans, because he announced on Twitter that his commitment date is set for Aug. 7.

The Buckeyes have gained entry to two of the first four editions of the College Football Playoff, winning it all in 2014 and getting humbled by Clemson in 2016. In each of the other two years, they’ve been right in the mix until the very end and at the very least had a case for inclusion. So what’s in store for 2018? Athlon Sports explored that very question in a post listing factors why the Buckeyes might or might not be headed to the playoff this season.

Ultimately, the final verdict went to Ohio State to make another even year playoff. Here’s part of what Athlon had to say: Ohio State has so many necessary pieces of the puzzle to contend for a spot in the College Football Playoff.  While Dwayne Haskins is inexperienced, look for Ohio State to rely upon its traditionally strong running game led by J.K. Dobbins and Mike Weber, as Haskins continues to grow and develop game by game.

The schedule is conducive to a younger team that should get better as the season progresses. The road to the Big Ten title should once again go through Columbus. If things go according to plan, Ohio State should be one of the four teams left standing come late December.

Our letterman Evan Spencer, along with senior writer Austin Ward, broke down film of Ohio State H-Back Demario McCall making defenders look stupid. If you pass up a chance to watch the young GOAT torment defenses, that’s on you.

Basketball Bucks at the podium

Ohio State basketball players C.J. Jackson and Kyle Young took part in interviews on Tuesday. You can watch video here of them speaking about new faces in the locker room during summer workouts and how they both hope to grow this season.

Lettermen Row’s apparel store is officially active! Readers can show their support for the site with one of our premium quality, tri-blend t-shirts. Additionally, there is the option of having the shirt autographed by one of our Ohio State lettermen if so desired. More items will be added soon, so be sure to keep checking the site!

If your a college athlete, you know how Important naps are!