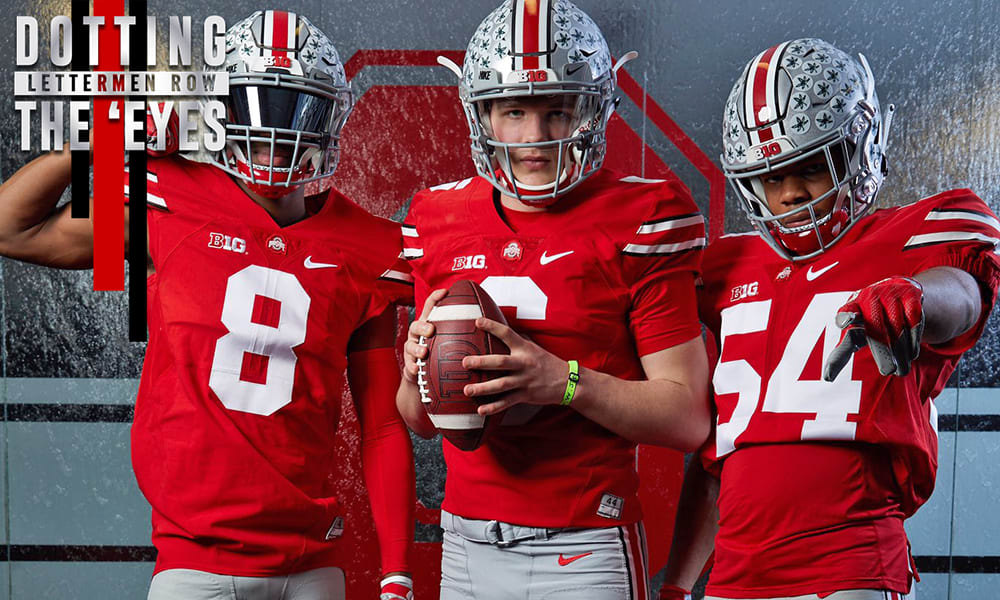 Stay in touch or be left out because Ohio State recruiting is a 24-hour, seven-day-per-week obsession. What’s the latest news as the Buckeyes build for the future? Get that and more Sunday through Thursday on Lettermen Row. Today’s update centers on a major 2021 target at quarterback, the Buckeyes push for Deamonte Trayanum and more.

The Buckeyes are still looking for a fourth quarterback in 2019 — or maybe a second in 2020. But they’ve not forgotten to make a push for a prospect at that position in 2021.

One of Ohio State’s top prospects at the position is recently offered Philadelphia star Kyle McCord. The 6-foot-3, 195-pound sophomore made his first visit to Columbus over the weekend along with two teammates at St. Joseph’s.

“I didn’t really have any expectations set for Saturday, but obviously I knew about the great history at Ohio State,” McCord told Lettermen Row. “I was blown away with the visit. The most impressive thing out of everything was just the people — the coaches and players.

“I loved talking to Coach [Ryan] Day and [quarterbacks] Coach [Mike] Yurcich and also getting to hear some of the current players talk. That really jumped out to me. Just how genuine the coaches were. While I was talking to them I could just tell they really cared about me. That was huge.”

Ryan Day spent some considerable time with McCord on a one-on-one basis.

“He was great, and plus with his background with quarterbacks, he seems like the perfect coach for me,” McCord said. “The only interaction that I had with him before the basketball game was his introduction, however I had a meeting with him after the game. He told me I was at the top of their list. They want me to visit again in a few months with my family and then possibly once more in June.”

The Buckeyes have offered only a handful of 2021 quarterbacks, but McCord, along with Illinois prospect J.J. McCarthy, seems to be topping the list right now. They’ll have to contend with a number of schools for each player, but Penn State is expected to be the biggest competitor for the fast-rising prospect from Pennsylvania. As a kid from a big city, Columbus felt comfortable for McCord.

“From what I saw, Columbus seems like a great place to be,” McCord said. “For my first time being out there, it was a great experience.”

Ryan Day has made it no secret at all that he’s attempting to reprioritize Ohio, and last weekend’s junior day weekend highlighted that. Akron Archbishop Hoban running back/linebacker DeaMonte Trayanum was one of a handful of local prospects in town, and the weekend felt a little different to him than previous visits to the school.

“Man, it was fun,” Trayanum said. “I just really got to sit down and talk with all the coaches. I got to ask all the questions I needed to.”

Asking questions is just one thing, of course. Getting answers is another.

The biggest remaining question for the 6-foot, 215-pound, 4-star athlete is exactly how he’d be used if he decided to commit to the Buckeyes. He appears to prefer playing running back.

“I was wondering about recruiting in the running back room,” he said. “They answered all of my questions.”

Trayanum has had an offer from Ohio State for a while now. Urban Meyer’s staff offered him, but it was Ryan Day who recruited his high school and made the transition from the Hall of Fame coach to first-year coach feel pretty seamless.

“Actually no [difference] at all,” Ohio’s fifth-ranked 2020 prospect said. “Ryan Day was actually the recruiting coach for my area, so no.”

There was some speculation that the Buckeyes could have closed the deal on Trayanum last weekend, but he’s not ready to commit yet.

“I really just want to make the right decision. When I’m in, I’m all in.”

Another in-state prospect that spent his Saturday at Ohio State was Manchester (Akron) High School athlete Ethan Wright. He’s Ohio’s 29th-ranked player in the Class of 2020 and has offers from 10 schools currently including Duke, Northwestern, Iowa State, Cincinnati and others. Like most Ohio-born prospects, his dream is to play for the Buckeyes.

“It is still a little surreal,” Wright said. “It’s been something I’ve dreamed about since I was young. I grew up a pretty big Buckeyes fan.

“It’s not my first time down there, but I enjoyed myself probably the most on this trip. It was nice to be invited and thought of as one of the best in the area.”

A 6-foot-1, 195-pound wide receiver and defensive back, Wright spent time with both defensive backs coach Jeff Hafley and receivers coach Brian Hartline during his visit.

“Coach Hartline was there at the basketball game, him and Hafley both,” he said. “They know exactly what they’re doing and are great coaches. Coach Hafley has coached at a high level and I think will be a great coach at the college level.

“And Coach Hartline has already molded the wide receiver room at Ohio State to something extraordinary.”

One of the reasons the Buckeyes haven’t yet offered Wright may be that they don’t know exactly what position he’d play.

“It’s in between safety and wide receiver,” he said. “I am completely open about the position I play in college.”

Wright will visit Ohio State for a camp in June and expects to return to the school for a spring practice.

Ohio State: What are Buckeyes going to do about a fourth quarterback?
Doug Nester: Ohio State verbal will sign with Virginia Tech over Buckeyes