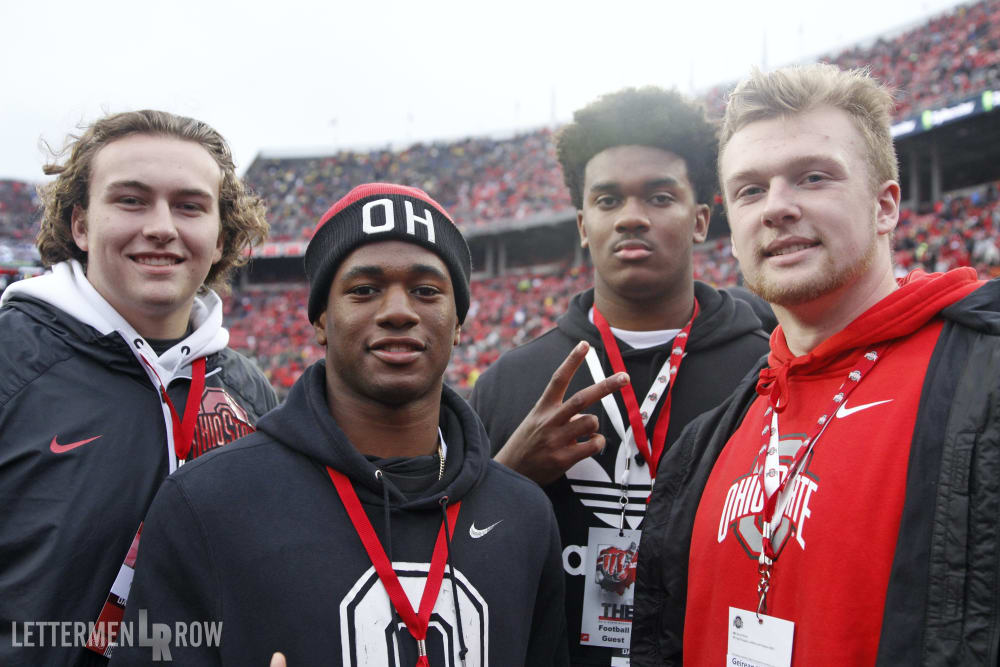 Stay in touch or be left out because Ohio State recruiting is a 24-hour, seven-day-per-week obsession. What’s the latest news as the Buckeyes build for the future? Get that and more Sunday through Thursday on Lettermen Row, including tonight’s update on how the Buckeyes are faring in the wake of Urban Meyer’s recruitment.

The decision was no doubt a challenging one for Wray, who was the first commitment in the 2020 class for the Buckeyes.

“This has been a challenging decision,” he said on Twitter. “Especially with my brother on the team.”

Wray has been an instrumental piece of what Ohio State has built to this point in its 2020 class. He had been key to adding new names, along with Jack Miller and Lejond Cavazos — who decommitted on Tuesday — and that work includes 5-star offensive lineman Paris Johnson and 4-star center prospect Luke Wypler.

That is the area that Wray’s decommitment will have the most impact. He’s still more than a year away from being able to sign at Ohio State, and as a player, needs development before he could be considered ready to play at the college level.

Ohio State will do its best to make sure that Wray is the last 2020 defection. Johnson is expected to visit the school later this week to meet with Ryan Day.

Doug Nester will take official visits to other schools

Programs don’t lose a coach like Urban Meyer and get better. There are going to be bumps in the road. And while some of them will be bigger than the others, it’s not necessarily easy to know immediately how severe each will be.

That brings us to Doug Nester. The first 2019 commitment for Ohio State had long planned to sign in December and arrive on campus in January, enrolling early and beginning his career as soon as possible. At his All-American Game jersey presentation on Wednesday, the 6-foot-6, 310-pound offensive guard announced his intention to take official visits to other schools in January and not enroll early with Ohio State.

From Herald-Dispatch.com and Grant Traylor:

Nester said that he remains “committed right now” to the Buckeyes, but noted that the coaching change has prompted him to take a step back in the recruiting process and weigh all options to ensure he makes the right decision for his future.

“That’s very important,” Nester said. “I just feel like with all this happening, I really have to go back and check all the boxes off. I’m going to take my officials to different places and see what’s out there.”

Ohio State is still set to land an official visit from Nester, but there will be some nerves from here. Penn State and Virginia Tech each had him on campus this season, and that pair of schools, along with Georgia, will likely get him on campus in the next month. Nester is very familiar with Day, but the uncertainty around who his potential position coach will be has him considering other options for the first time since committing in August of 2017.

Stay tuned. Committing as early as Nester did and never having second thoughts is pretty rare. The kids in these situations, especially with coaching changes, should take every opportunity to confirm their initial decision through research of other schools.

Lejond Cavazos decommitted from Ohio State on Tuesday night. On Wednesday, he received a visit at the IMG Academy from Greg Schiano.

“Coach Schiano came by today,” Cavazos told Lettermen Row on Wednesday afternoon. “We were just talking about like the future of Ohio State under Coach Day.”

It’s been a whirlwind 48 hours for the 4-star 2020 prospect. His father has long been a close friend of Urban Meyer, and because of that he was told on Monday that a change could be coming in Columbus.

He just didn’t believe it.

“We found out the day before it came to light, but I thought it was a joke,” he said.  “It got confirmed that morning before it touched the media. I was still asleep. I woke up with a bunch of messages about it.”

That led to a difficult decision for Cavazos and his family. They know Ohio State and like the program, but the changes forced a step back.

“I don’t have a relationship with [Ryan Day], but we’ve met,” he said. “The reason for committing to the school was relationships. I want to rebuild a relationship with him and just make sure I get the same feeling as I did with Coach Meyer. Coach Day seems like a great guy, and I know for a fact he will lead Ohio State in the right direction. I just want to get to know him.

“I didn’t think all of this would happen, but I know I’ll get the right guidance from family and friends.”

Ohio State is in desperate need of some good news on the recruiting trail.

Wednesday night, linebackers coach Billy Davis will visit Cleveland St. Ignatius 4-star linebacker Tommy Eichenberg with the hopes of providing it. It’s been two weeks since coaches last saw the 6-foot-4, 235-pound linebacker after he visited for The Game against Michigan, and they would love for him to become the first player to commit to the Ryan Day Era of Ohio State football.

As of 5:00 p.m. on Wednesday, here’s where things seem to stand with the Buckeyes and their current crop of 2019 and 2020 commitments.

So far, the decommitments have both been in the Class of 2020, from Cavazos and Wray.

I’ll update this list again on Thursday as I get clarification on some of the unknown situations above.