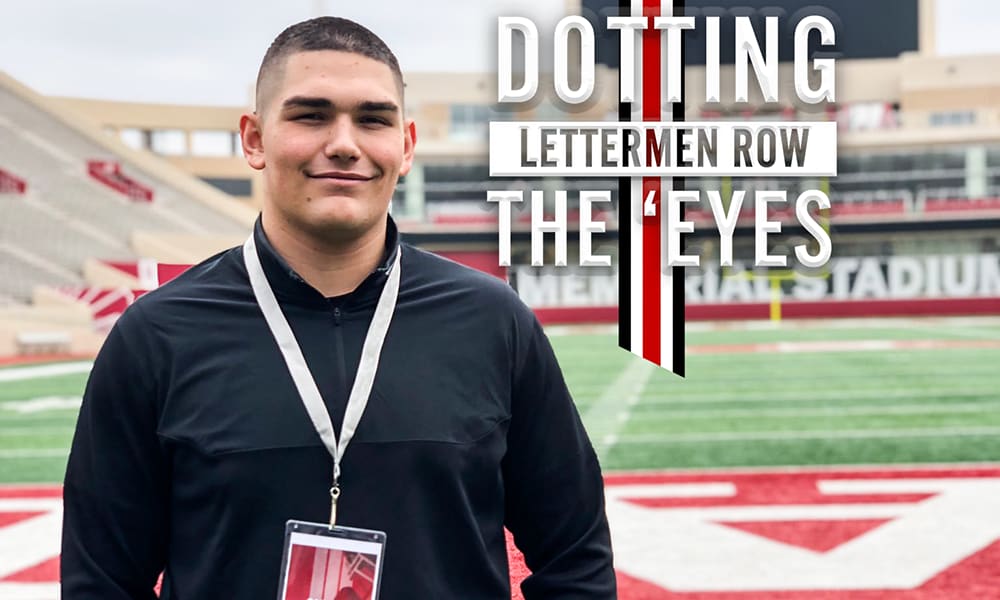 Stay in touch or be left out because Ohio State recruiting is a 24-hour, seven-day-per-week obsession. What’s the latest news as the Buckeyes build for the future? Get that and more Sunday through Thursday on Lettermen Row. Thursday’s notebook has an update on Ohio State 2021 targets from Ohio and Texas and also talks to a local defensive end hoping to earn a Buckeyes offer.

Missouri 2021 lineman Gabriel Rubio had planned a trip to Ohio State in April for the Buckeyes spring game. That visit did not happen — the 6-foot-6. 290-pound 4-star prospect chose to camp at The Opening regional event in St. Louis that weekend instead — but he had already begun rescheduling his trip.

“I’ve been in weekly contact,” Rubio said of the Buckeyes. “We agreed on June 6, after my finals, for a visit. I’m going to camp there as well.”

That camp could be an important one for Ohio State and their efforts in recruiting Rubio, who is ranked as the country’s 15th-ranked defensive tackle in 2021 by 247Sports.com. It’s his first chance to work in front of Larry Johnson and show that he is capable of playing on the defensive line in college — because there’s some debate about whether or not that will be his best position down the road.

“The most important thing during this visit is for the staff to see me play the defensive line,” Rubio said. “Some Ohio State coaches have told me that I’d be an elite offensive lineman for them, but I want to play on the defensive line in college and beyond.

“I have offers to play on either side of the ball but my heart is on defense. I’m a defensive tackle through and through.”

Now he’ll have the chance to prove that to Johnson and the Buckeyes. Rubio will make the trip to Columbus with his father, Angel, a former NFL defensive tackle who played professional football for a decade.

Ohio State fell short in the Class of 2018 and 2019 as they recruited defensive ends Jayson Oweh and David Ojabo from The Blair Academy in New Jersey — they went to Penn State and Michigan, respectively.

The Buckeyes are back in Blairstown trying to recruit 2021 defensive lineman Aaron Armitage, hoping to have better results this time around.

Armitage is one of the country’s hottest defensive line prospects, picking up offers from almost 20 schools already. The Buckeyes will hope his early interest in the school, even before he was offered in early May, can help turn his recruitment in their favor.

“I grew up watching Ohio State and a couple of other schools,” Armitage told Lettermen Row in November. “I know all about the great players that attended Ohio State, guys like Joey Bosa stand out. It’s pretty cool to think about being recruited by them.”

Now with an offer from Ryan Day’s program, the 6-foot-4, 240-pound lineman hopes to get closer to Ohio State.

“The offer means a lot coming from such a prestigious school, who has a likely chance of winning a national championship,” Armitage said. “They said they would love to see me out on campus and at the moment I’m planning on visiting, or attending a camp, around the start of June.

“My sister plays basketball and she has a tournament around the end of June close to Ohio State, so that would work out pretty well.”

Another recent defensive line offer that had been sent out by the Buckeyes was to St. Peters Prep (Jersey City, N.J.) 2022 rising star Keith Miles, Jr., or K.J.

I am blessed to have received an offer from @OhioStateFB thanks #Buckeyes @CoachJeffHafley @CoachRyanDay pic.twitter.com/qMX6ssStlj

A 6-foot-4, 265-pound soon-to-be sophomore, Miles has a number of major offers already, including the Buckeyes. Alabama, Michigan, Penn State and more than a dozen others have not waited to offer. He has some recent peers who have matriculated to Ohio State and that’s helped pique his interest in the Buckeyes program.

“It’s great to be recognized and especially by big schools,” Miles said. “I know Ohio State is a winning program and a place to get a great education. I also know a couple of players Tyler Friday and Ronnie Hickman.”

Miles has already been able to see a number of the country’s biggest programs and credits his father for helping him get to see a handful of big-time places.

“I just have so much time left in my recruitment process,” he said. “My father wants me to experience as much is possible and find the right fit. Every summer, my father takes me to different conferences. I’ve been to Auburn, N.C. State, North Carolina, Rutgers and Temple. This summer, I’m camping at Alabama, Tennessee and Georgia.

“I haven’t been to Ohio State yet, but I hope to this summer.”