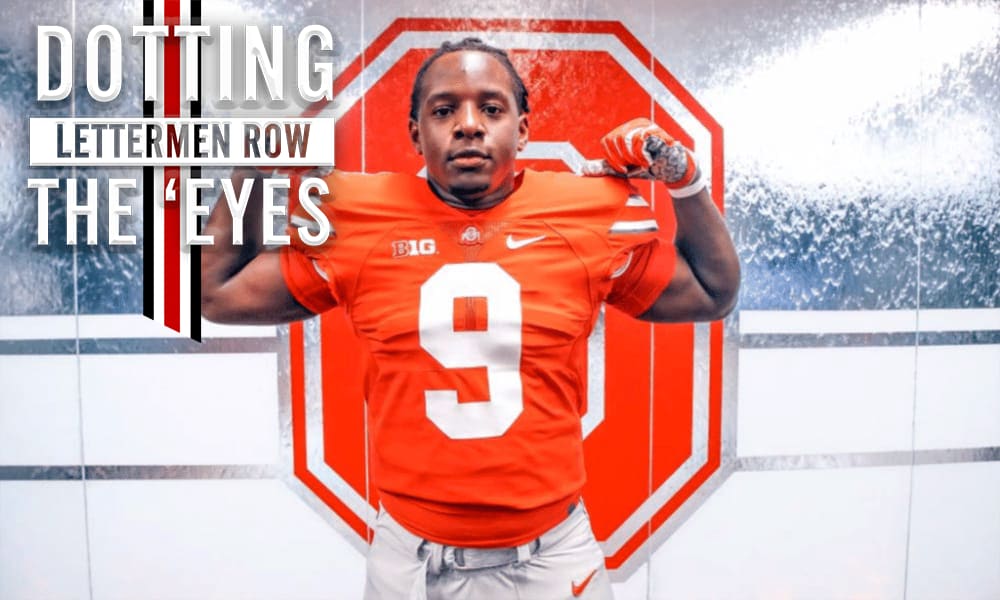 Stay in touch or be left out because Ohio State recruiting is a 24-hour, seven-day-per-week obsession. What’s the latest news as the Buckeyes build for the future? Get that and more Sunday through Thursday on Lettermen Row. Today’s edition checks in on 2019 signee Cormontae Hamilton, updates the official visit plans for Cameron Martinez and talks two new Ohio State offers.

He’s kind of become the forgotten man in the Ohio State signing class, but Tennessee tight end Cormontae Hamilton has been working his tail off to get ready for his June enrollment at Ohio State.

“I’m getting packed and getting my house settled,” Hamilton told Lettermen Row. “I’m ready for it.

It’s not been easy for Hamilton, who was listed at 6-foot-2 and 263-pounds in his 247Sports.com profile. But it’s definitely been worth it. The future Ohio State tight end is feeling more and more comfortable with his lifestyle changes and thinks it will translate to better outcomes on the field.

“It has been a constant effort,” he said. “I can’t even fit into my clothes like I used to anymore, I have to get a smaller size now. I’ve cut off the junk food in my diet, but I drink juice here and there. Then also my momma makes me drinks/smoothies that are healthy with spinach, ginger, apple-cider vinegar, cinnamon and different fruits in it.

“I feel more explosive leaving my stance and start and running my routes.”

Once more, the Buckeyes continue to show Muskegon (Mich.) athlete Cameron Martinez that he’s a major priority in the Ohio State 2020 class.

On Tuesday, Martinez was visited by receivers coach Brian Hartline, a visit that occurred just over a week after defensive coordinator Jeff Hafley’s last visit to Muskegon. Martinez is being recruited by Ohio State as an athlete, and he’s a player the Buckeyes would welcome into their program on offense or defense — whichever the 5-foot-11, 175-pound prospect prefers.

While his eventual position remains uncertain, what is clear is that Martinez is very high on Ohio State. The Buckeyes are one of two programs that he’s locked in an official visit with, and he’ll be in Columbus for that trip over the June 21 weekend. He will visit Northwestern in an official capacity this weekend and has a planned trip to Penn State for the end of May.

Michigan, Iowa, Wisconsin, Kentucky and others remain very much in the mix for Martinez, but the Buckeyes have positioned themselves as the team to beat in this recruitment moving forward.

Larry Johnson and the Buckeyes are emerging as a major contender for Tennessee 2020 defensive lineman Tyler Baron, and the 4-star prospect has been recently talking to a fellow Volunteer State lineman offered by Ohio State on Tuesday.

That is Jay Hardy, a 4-star prospect from the McCallie School in Chattanooga. The country’s fourth-ranked strongside defensive end, Hardy was recently in contact with Baron about the Buckeyes. Then, voila, an Ohio State offer appeared.

“Me and Tyler Baron were talking about it Monday night,” Hardy, 6-foot-4 and 270-pounds, told Lettermen Row. “It really is different to get an offer from Ohio State. I’ve not been up there, but Tyler said it’s great.”

Hardy has offers from more than 30 schools, including all the big boys in the SEC and around the Big Ten. Tennessee’s second-ranked 2020 prospect knows he’ll need to get up to Ohio State for a visit in the near future.

“I’m probably going to narrow everything down after these summer visits,” he said. “Larry Johnson and I had been in touch for about a week, and he said he would offer me after he stopped by the school. Once he stopped by we talked on the phone after and he offered me.

“I really like what they have done these past couple years, putting out guys like the Bosa brothers. They know how to develop players.”

New 2021 linebacker offer Ethan Calvert hasn’t seen Ohio State’s reputation change, and the expectation among the West Coast’s top prospects is that the program is a team to be reckoned with for years to come.

“It means a lot,” Calvert, who was offered by linebackers coach Al Washington on Monday, told Lettermen Row.”Not many kids in California have this offer, and for them to offer me as a sophomore is really humbling. Ohio State is going to be elite for the next decade for sure.”

Calvert said he “for sure” wants to visit Ohio State this summer and that he was told the offer came because Washington liked what he saw on tape.

“He told my coach he likes my physicality and the intensity I play with,” Calvert said. “He also said he liked my speed.”