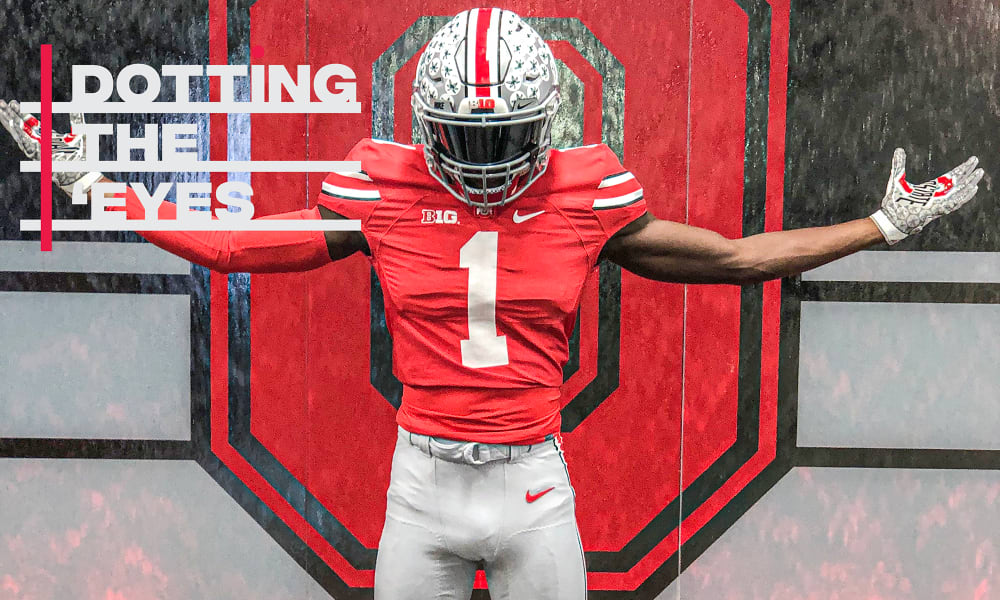 Stay in touch or be left out because Ohio State recruiting is a 24-hour, seven-day-per-week obsession. What’s the latest news as the Buckeyes build for the future? Get that and more Sunday through Thursday on Lettermen Row. Thursday’s notebook has the latest on the return to Ohio State for Tony Grimes while the Buckeyes continue to wait for Ohio running back Miyan Williams to make a trek north to Ohio State.

On Wednesday evening, we here at Lettermen Row talked a little bit about Virginia Beach (Va.) junior cornerback Tony Grimes and the methods being deployed by Ohio State in its efforts to recruit him.

That chart, publicized on Twitter by Deon Glover, an assistant coach at Princess Anne High School — and Grimes’ father — was just one thing that the Buckeyes have done in an attempt to separate themselves in the recruitment of the country’s top-ranked 2021 cornerback.

“Regarding that graphic, it’s absolutely the best breakdown I have ever seen regarding support for the player,” ” Glover told Lettermen Row. “Penn State has a really good breakdown, but Ohio State’s was off the chain.”

As a top-10 prospect and 5-star player, Grimes is getting the best foot forward from school courting him. He’ll be back in Columbus giving Ohio State another chance to provide testimony about what the program can do for the 6-foot, 180-pound junior.

“We’d been waiting for [Ohio State linebackers coach Al] Washington to text me back on the best game to come to,” Glover said. “It’ll be for the Ohio State and Penn State game.”

Grimes is a nominee for the All-USA Defensive Player of the Year for the work he’s done so far this year at Princess Anne. He’s in a closely contested battle and is one of two juniors to earn that honor. You can vote for your choice here.

Ohio State expecting to see Miyan Williams, but when?

The waiting game continues when it comes to Winton Woods (Cincinnati) 2020 running back Miyan Williams.

Offered by Ohio State almost a month ago, there’s been no hurry by the Iowa State verbal to get to Columbus and check in on the program. And because of that, there is no real momentum toward a potential flip from the Cyclones to Ohio State.

The reasons for that vary from source to source. But what’s perfectly clear is that the 5-foot-10, 210-pound tailback — ranked the No. 24 senior in Ohio — isn’t a sure thing to pick the Buckeyes at this point.

“I think he is solid to Iowa State,” one source in Cincinnati said. “He hasn’t talked about Ohio State to Buckeyes recruits in this area at all.”

Still, the odds are that Williams will make a visit to Ohio State at some point. A different source shared that he believes it is going to happen soon, but to this point there is no concrete date.

Buckeyes and the potential pursuit of Darnay Holmes

Ohio State could be replacing four starters in its secondary after the season, and even with the rise of talented sophomore Cam Brown, it’s hard to know exactly who is in line to step up and become the next wave of “DBU” in Columbus.

Yes, the Buckeyes have a trio of talented cornerback prospects committed in the Class of 2020. But for a team that could very well be a national title contender, the lack of surefire, reliable starters in the defensive backfield could prove to a fly in the proverbial ointment in 2020.

So, is the transfer portal going to help Ohio State out? That’s what has the rumor mill churning when it comes to a potential transfer from Darnay Holmes out of UCLA. Three years ago the former 5-star corner picked the Bruins over the Buckeyes in an infamous hat ceremony at the US Army All-American Bowl.

Looking back at the Class of 2017, Holmes was the third-ranked cornerback prospect in the country, trailing only Jeffrey Okudah and Shaun Wade. And the former Calabasas (Calif.) standout made multiple trips to Columbus in 2016.

So it’s easy to see why there could be interest if Holmes could be the next big-time former target who comes back to Ohio State in an attempt to revitalize his NFL prospects. There’s a very natural fit here between the Buckeyes and Holmes were his transfer to materialize, and it’s an intriguing thought, for sure.

However, until the 5-foot-10, 190-pound cornerback is actually in the transfer portal, it’s kind of meaningless to wonder too loudly about the possibilities.

Ohio State, like most of the country’s top programs, is not going to be shy about using the transfer portal to fill roster holes. However, Ryan Day said that to this point the Buckeyes are not interested in conjecture and aren’t monitoring players until they’re officially on the market.

“We always monitor it now,” Day said Monday. “[Ohio State director of player personnel] Mark [Pantoni] has guys that are watching it all the time, and the minute somebody goes in, we do our research, looking at film or finding out more about the individual.

“We do not have somebody assigned to just looking at players out of their teams. I don’t know if that’s going to be the next [wave]. We’re going to talk about that in the off-season and figure out if that’s the right thing to do. It’s kind of a scary road to go down. But right now we’re not doing that, and if somebody pops into the portal, we’ll do our research and find out, but right now we’re not doing research on guys who are on anybody’s team.”

Are Buckeyes moving away from recruiting dual-threat quarterbacks?
Ohio State finding it can win on, off field as recruiting priorities change