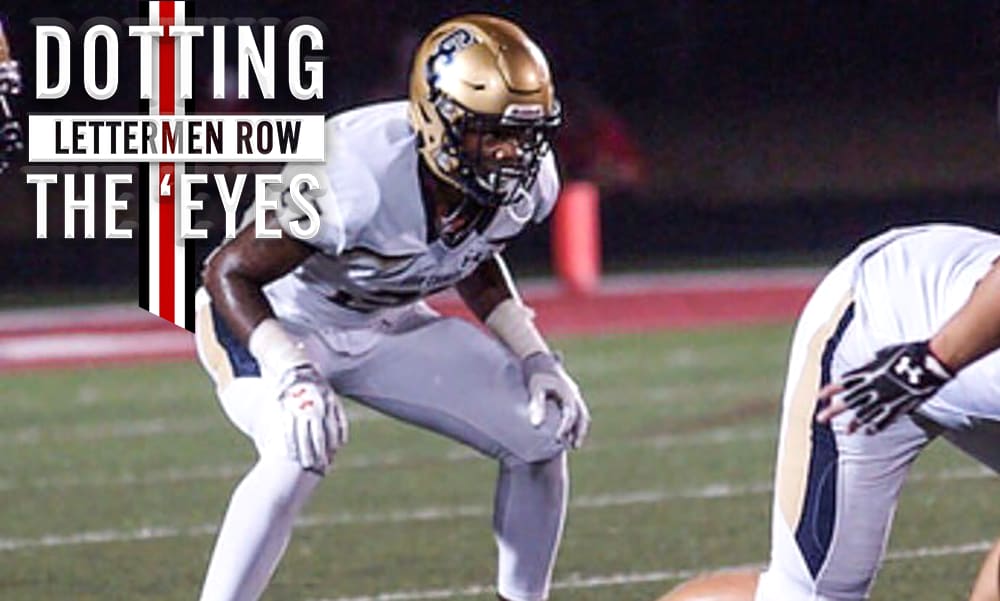 Stay in touch or be left out because Ohio State recruiting is a 24-hour, seven-day-per-week obsession. What’s the latest news as the Buckeyes build for the future? Get that and more Sunday through Thursday on Lettermen Row. Sunday’s notebook has an update on Buckeyes targets Mitchell Melton and Jacolbe Cowan and more.

The battle for Mitchell Melton is about to heat up

As expected, Michigan held off Notre Dame for highly-ranked 4-star defensive end Braiden McGregor, who committed to the Wolverines over the Irish, the Florida Gators, the Buckeyes and everyone else on Friday night.

Ohio State was a darkhorse contender for McGregor for months and while that recruitment never seemed like one that anyone should’ve expected to turn in the Buckeyes favor — especially after he didn’t visit this spring — it’s a recruitment that is now likely to cause some reverberation throughout another.

The recruitment of top Buckeyes linebacker target Mitchell Melton, who is being recruited by Notre Dame as a defensive end/linebacker combo and will now certainly become even more of a priority for the Irish. Of course, Melton is still being recruited by Michigan as well and he intends to take an official visit to all three schools in June but now, for each, the messaging is certain to change.

Ohio State has been consistently recruiting Melton since December and without any linebackers committed — or defensive ends for that matter — it’s easy to underscore to Melton and his family how they’ve prioritized him for months, even across a bevy of staff changes. The Buckeyes have their eyes on the 6-foot-4, 230-pound linebacker in a true linebacker role, a la Malik Harrison, and there’s been no debate about his importance to the Oho State coaching staff since he was offered in December.

Michigan has also been consistent in their recruitment of Melton, but unlike the Buckeyes, the Wolverines have three linebackers already committed in the Class of 2020 — two of them are Baltimore, a 35-minute drive from Olney, where Melton lives.

Notre Dame has not, to this point, been as aggressive as the Buckeyes and Wolverines have been but as noted, that’s likely going to change. I think a decision from Melton should come sometime soon after his official visits are made in June and as of now, I believe that Ohio State is still the team to beat.

Jacolbe Cowan has a tentative date for next Ohio State visit

One of the Buckeyes long-time targets in the 2020 defensive line class is North Carolina 4-star Jacolbe Cowan, who told Lettermen Row that he has — at least tentatively — the date of his next visit with the Buckeyes.

“My mom and I talked to Coach Johnson earlier (Friday) on the phone,” Cowan shared with Lettermen Row. “We will possibly be visiting the weekend of June 15. We’re undecided as of right now if that would be an official visit but it’s a possibility it will be.”

Cowan is the country’s 14th-ranked defensive tackle and has been to Ohio State twice before. He has remained in regular contact with Larry Johnson and believes the relationship with the legendary defensive line coach is among the best he has anywhere. That’s why the Buckeyes are a program he wants to get back to as he starts to turn his focus and make what seem to be more “serious” visits.

“In comparison with other schools my relationship with Coach J is definitely better than a large majority of defensive line coaches,” he said. “I’m just taking my time with things and making sure that all the boxes are checked. The last thing that I want to do is commit to a school in a hurry then have second thoughts about my decision.

“Any visit going forward from now until I make my decision will be very important and will have a large effect on my recruitment.”

Ohio State is one 38 schools to have offered Cowan.

The timing of that announcement is likely just coincidence, but there’s no doubt the Buckeyes made a big impression on the country’s 19th-ranked cornerbacker (according to 247Sports.com) in his first trip to Columbus.

“Ohio State was great,” he said about that trip. “I loved my visit. I definitely learned more about the defense and how I fit. I plan to return this summer.”

Johnson has set his commitment date just about two weeks after re-opening his recruitment, so he’s clearly a young man that isn’t entirely interested in being recruited for months on end.

We’re still working to determine what happens from here in this recruitment —  and there are no current 247Sports crystal ball predictions for Johnson,  a rarity that speaks to how he’s still relatively unknown on the recruiting trail  — but one good measuring stick is going to be where he sets his official visits in June, so we’ll keep an eye on that in the next few weeks.