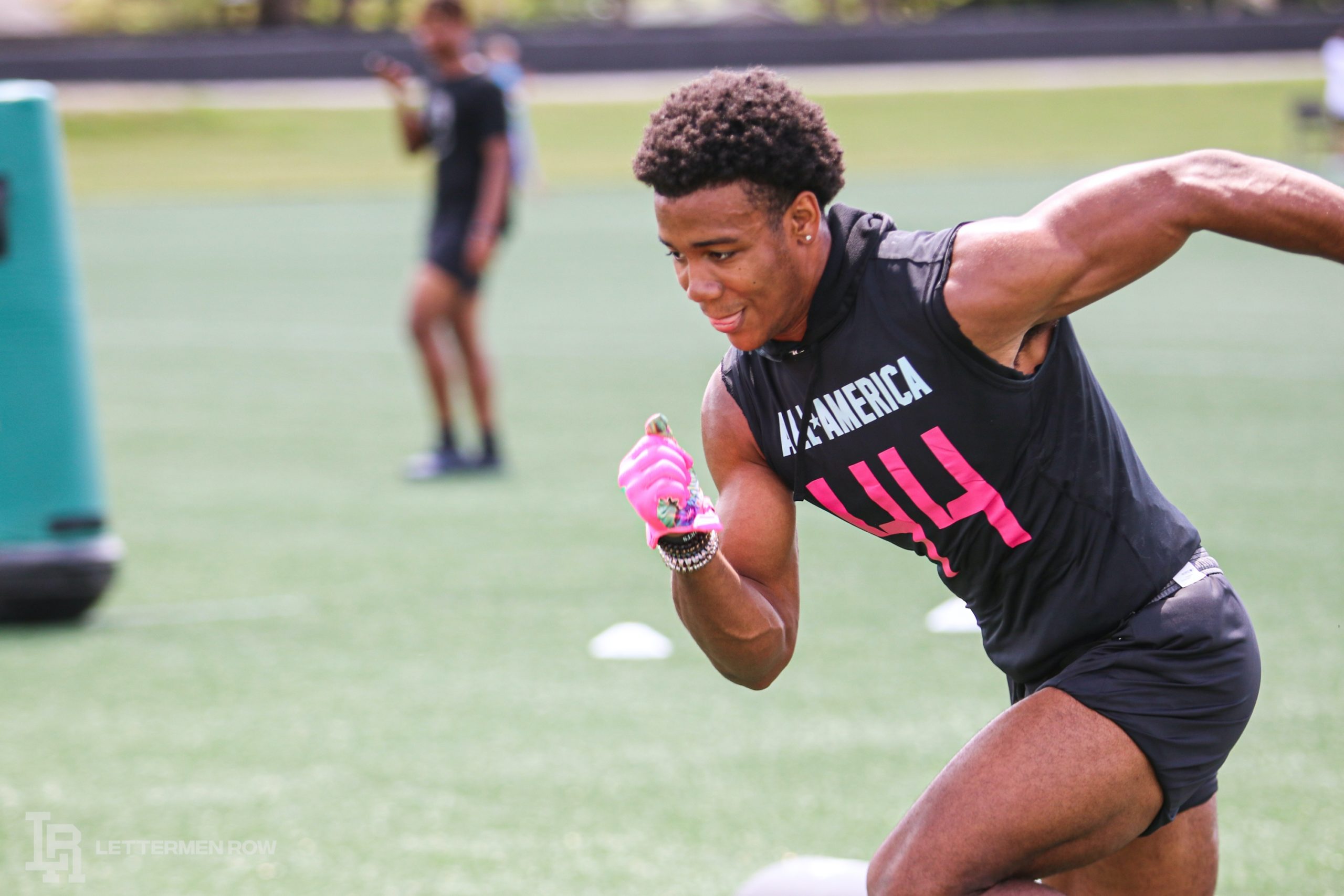 C.J. Hicks was impressive in his first game of the season. (Birm/Lettermen Row)

One of Ohio State’s first commits in the 2021 recruiting cycle, Jayden Ballard doesn’t talk to media and keeps quiet — unless he’s on the field.

Ballard is a high four-star prospect on the 247sports.com composite rankings, sitting as the fifth-best receiver in America at No. 49 overall. But he may need a ratings bump if he continues to show what he did during his first game of his senior season. Ballard hauled in a pair of touchdown grabs, had another that was called out of bounds and picked off a pass in Massillon’s 24-23 loss to Lakewood St. Edward.

🐅🏈@OhioStateFB fans here’s #OSU WR- recruit Jayden Ballard @j_ball21 from @MassillonSchool opening his Senior season with the @MassTigers2020 grabbing a pair of touchdown passes of 37yards & 31yards & an INT in a 24-23 loss to @SEHS_FOOTBALL. Here’s the 31 yard TD grab!🐅 🏈 pic.twitter.com/1WTswPP9ef

Brian Hartline has done an incredible job recruiting top talent at wide receiver to the Buckeyes, and Ballard is next in that pipeline. Ballard has a chance to be another five-star prospect Hartline was able to reel in and develop.

Reid Carrico, the four-star linebacker from Ironton, is one of the top inside linebacker prospects in the country. But he’s not just a linebacker.

Carrico is always the star for Ironton, and Week One was no exception. Ironton steamrolled Portsmouth 50-9 behind three rushing touchdowns from Carrico. The 6-foot-3, 225 pound inside linebacker who helped build the 2021 class for the Buckeyes just continues to find more ways to impress. The three-touchdown performance showed his versatility on both sides of the ball.

The 2022 recruiting class is off to a hot start at Ohio State, and it’s led by three of the top outside linebackers in the country. Gabe Powers and Dasan McCullough are elite talents. So is C.J. Hicks, who is already beginning to prove why his mid-summer ratings bump was more than justified.

Hicks certainly made plays on defense in Kettering Alter’s loss to Clarksville Clinton-Massie, but his skills on special teams were what turned heads.

Hicks fielded a punt, made a few tacklers miss and scampered 76 yards for a punt return touchdown to cut Alter’s deficit to just two points. Ohio State loves players who can contribute on special teams before they make the jump to their respective positions. Hicks is doing a good job of showing he’s willing and able to provide a special teams boost for the Buckeyes when he gets on campus in a couple years.

High school football officially started over the weekend, but some of the best players in the country — and in Ohio State’s top-ranked recruiting class — opted out of a season to focus on joining the Buckeyes. Some even had their seasons postponed to spring, making it impossible for them to both enroll early at Ohio State and play their senior season in high school.

The group of players who opted out is led by five-star defensive end Jack Sawyer, who decided to forego his final year of high school before the Ohio High School Athletic Association announced football could be played this fall. Both top running back prospects, TreVeyon Henderson and Evan Pryor, are also not playing. Henderson’s season was canceled by his athletic association. Pryor opted out.

Tight end commitment Sam Hart had his season canceled by the high school organization in Colorado, and the same can be said for both quarterback Kyle McCord and wide receiver Marvin Harrison Jr., both from Pennsylvania.

Jordan Hancock opted out of his season in Georgia, too.