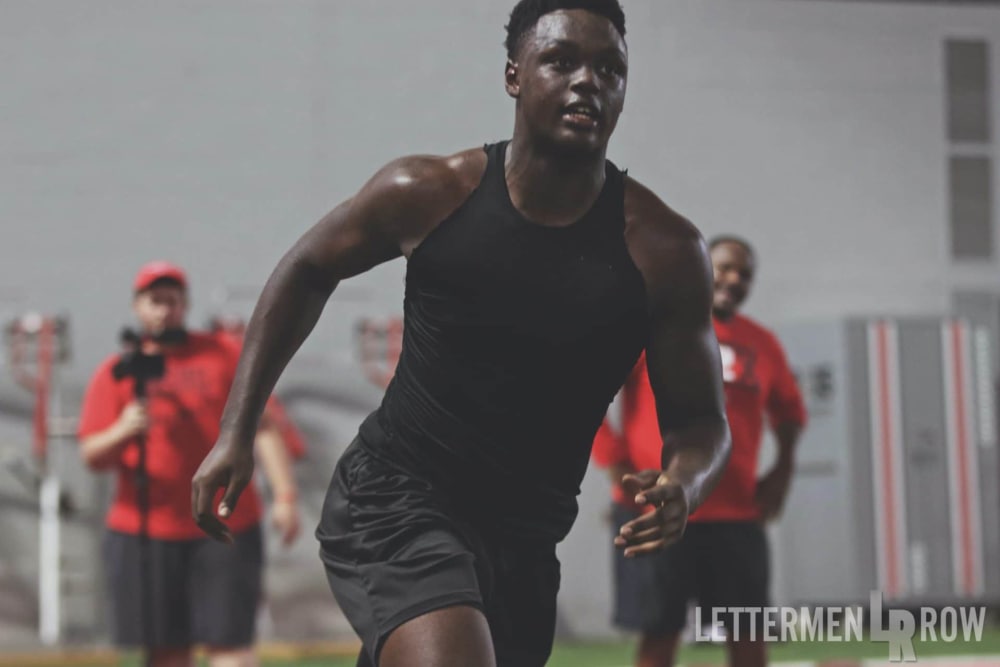 Larry Johnson and Ohio State had a number of big-time prospects on campus on Saturday at the Buckeyes most recent one-day camp, but there was no doubt that the defensive line group stood tall among the nearly 900 campers in attendance.

Johnson, as he usually does, pulled a few select prospects to the side early in the day and focused his work on that group. Columbia (Mo.) Rock Bridge 3-star defensive end Jalen Logan-Redding was one of those players and the 6-foot-4, 230-pound rising-junior relished the opportunity to get one-on-one work with a football legend.

“Working with Coach Johnson was truly an amazing, experience of a lifetime,” Logan-Redding told Lettermen Row. “The drills and techniques that he showed me during camp showed me a different understanding of my position. I will take his knowledge and what I learned back to Columbia to improve my skills and game performance. It was truly a honor to learn from Coach Johnson.”

Logan-Redding is not yet a nationally-known prospect. He’s garnered an early 3-star ranking and checks in as the country’s No. 21-ranked weak-side defensive end, but holds just three offers currently, and only one from an FBS-level school, his home-state Missouri Tigers. There was good feedback from the Buckeyes though and he’s optimistic that come Sept. 1 – the date that 2020 prospects can be contacted by schools – the building blocks of a relationship with the Buckeyes he has now will develop into something more.

“They told me that I did a great job and that I worked hard,” Missouri’s No. 6-ranked prospect in 2020 said. “Coach Johnson said he liked my strength, my quickness and my size. I will to continue to work hard on my skills and techniques and hopefully I will hear more from them in the near future. I am hoping to hear from Ohio State after September 1.”

A Missouri fan growing up, Logan-Redding will camp at Notre Dame next weekend. The Fighting Irish and the Buckeyes, along with the Tigers, were the programs he said he grew up watching closely. He told LR he feels no pressure to stay home, and that he’s eager to really dive into the recruiting process. He expects to return to Ohio State for a second visit, likely in the fall.

“Mizzou was one of my favorites because I grew up in Missouri. I grew up being a Tiger fan,” he said. “I loved Ohio State and Notre Dame, to name a few, because they build champions and have great relationships with their student-athletes. You cannot mention football without mentioning these teams and their history of national championships.

“I am going to the Lineman Challenge Camp at Notre Dame next weekend. I received a tour of Ohio State football and surrounding facilities, and want to see more of the school in general the next time I come to visit.”