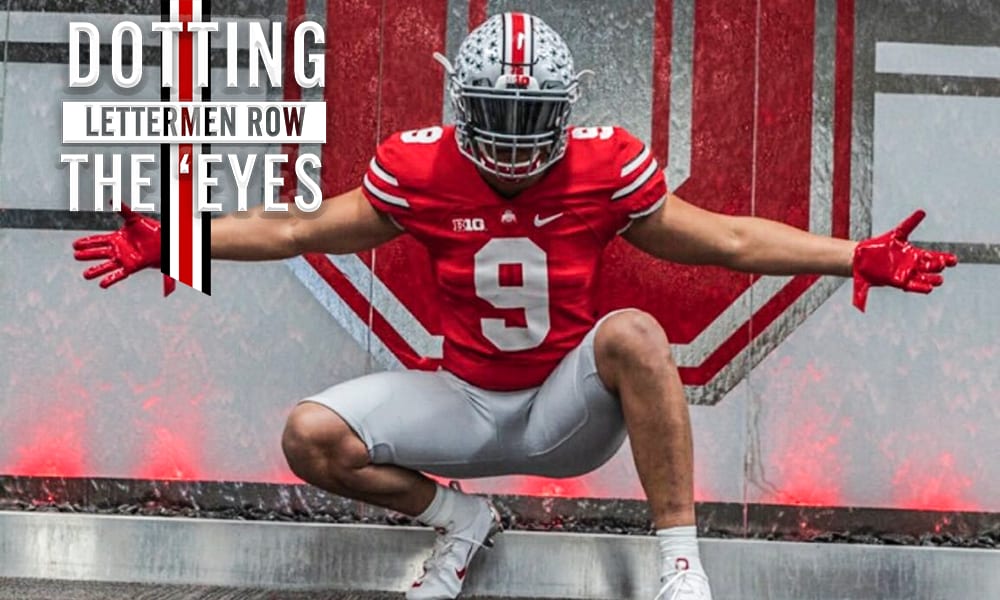 Stay in touch or be left out because Ohio State recruiting is a 24-hour, seven-day-per-week obsession. What’s the latest news as the Buckeyes build for the future? Get that and more Sunday through Thursday on Lettermen Row. Today’s update checks on the latest with a pair of top defensive end targets being chased by the Buckeyes.

About a month ago, Knoxville (Tenn.) Catholic defensive end Tyler Baron took a visit to Ohio State two days after the spring game, a one-day trip that came on the heels of a recruiting camp in Cincinnati. Baron called that trip to Columbus “great,” and it’s led to an improving relationship between the 4-star defensive end prospect and the coaching staff — namely Larry Johnson.

“I have been staying in touch, mostly with Coach Johnson,” the 6-foot-5, 255-pound Baron told Lettermen Row. “I feel that I’m developing a great relationship with Coach Johnson, and it has definitely been in my thoughts when thinking about Ohio State.”

Early in his recruitment, it was Ohio State assistant Tony Alford who led the way in getting to know Baron. Now it’s Johnson, and his legendary status is something that Baron, the country’s tenth-ranked strongside defensive end, has taken notice of.

“Just him having his prestigious career, it was definitely something to take in,” Baron said. “He feels that I can fill a gap next year at the 5-technique and maybe even the 3-technique as years go on. Their defensive line tradition and how they are making me a priority for the 2020 class has me interested.”

The Buckeyes are one of the top schools for Baron, and he intends to start planning his nex line of visits in the near future.

The Buckeyes are chasing a couple of defensive ends in 2020, and I think the number they’re looking to land at that position is likely two. They’ve now made the list for one of the country’s best at the position.

That is North Carolina’s Desmond Evans, the country’s second-ranked weakside defensive end and a 5-star prospect ranked as the No. 15 overall player in the Class of 2020. He’s a player that Ohio State has been keeping tabs on for a long time and has made multiple visits to see him.

Like most of the most talented players that have come out of North Carolina in recent years, Evans keeps to himself for the most part. So, it’s not really easy to see where things are in his recruitment, but the Buckeyes are the lone Big Ten team on his list — and that’s because of Johnson, period.

The key thing here for Ohio State is to get Evans on campus, and there’s hope he’ll be on campus this summer. Doing that is the only way to really know where things stand with him as the Buckeyes try to narrow down their options at defensive end.

4-star safety Jordan Morant and running back Jalen Berger each went to Twitter to announce their commitment plans. They’ll commit on the same day: Jan. 4, 2020.

I will be committing Jan 4th . At the Adidas All American Game 🤙🏾 #3StripeLife pic.twitter.com/upeQ0aZmk3

The Adidas All-American Game, formerly the U.S. Army All-American game, will be the backdrop for both Morant and Berger to make their college choice. Ohio State is in the final two for Morant along with Michigan, something he talked about with Lettermen Row following his visit two weeks ago.

“It’ll be a hard decision, so I’ve just got to see where I would fit the most, and where I feel that it would be the best for me,” he said. “I’ve decided I will be committing in December, so I can take it slow and get all of it down without rushing.”

The road to signing day is long, and the Buckeyes are going to keep working on this pair of New Jersey stars until the final picks are announced.

The Buckeyes have their 2021 quarterback with last week’s addition of Kyle McCord, and they’re working overtime to bring a handful of the country’s best targets to play alongside of him. McCord spoke of a few names on that list during this week’s episode of Birminology, but Tuesday the Buckeyes added a new name to the list.

Dont’e Thornton is a 6-foot-4, 180-pound receiver from Baltimore’s Mount St. Joseph High School and an early Penn State commitment. Ohio State began their communication with Thorton in January, and it was assistant receivers coach Keenan Bailey who extended the offer on Tuesday, according to the No. 54 recruit in the 2021 rankings per 247Sports.com.

Thornton caught 40 passes and scored ten touchdowns in the 2018 season and committed to Penn State in February.